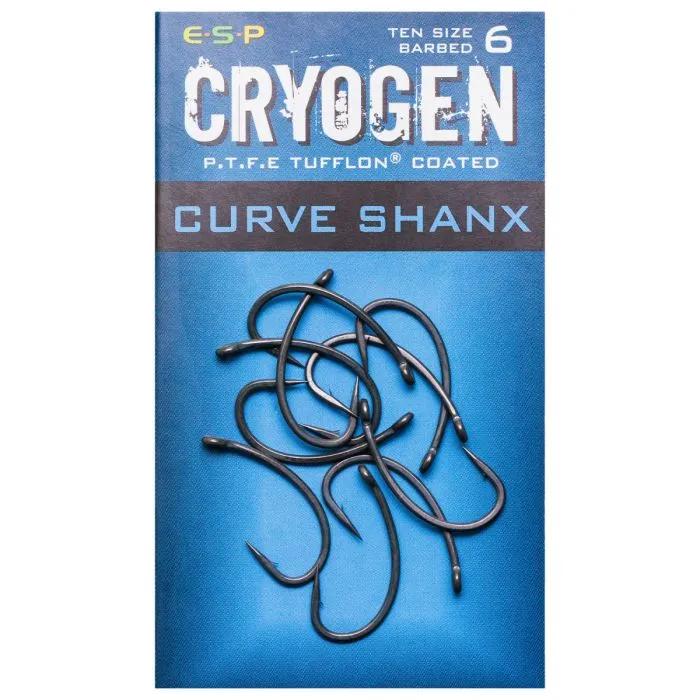 ESP’s Cryogen Hook series has been world famous for achieving the seemingly impossible: super strong without increasing the gauge of the wire. However, for those anglers who want a stepped up wire gauge too, the brand has you covered. This ESP Cryogen Curve Shanx Hook joins a trio of hooks designed to be an expansion to the original and best selling Cryogen range and it offers you a super-strong alternative for targeting the very biggest species.

The original ESP Cryogen Hooks relied on the cryogen tempering process in order to provide them with their impressive strength. This process first involves heating the hook to approximately 180 degrees – at which point most traditional hooks are left to cool before being packaged. Cryogen hooks, on the other hand, are then put through a unique super-cooling process. This is the cryogen freezing stage of the process and it chills the hooks down to minus 195 degrees over a period of 24 hours. The hooks are then warmed till they reach an ambient temperature. This entire process manipulates the steel molecules in the hook to ensure that the hook can offer greater resistance to stress, increasing the hook’s resistance to wear and tear, and improving the overall strength of the hook. This is process which is most commonly used in the engines of Formula One cars to ensure that they can perform under significant stress on the race track. With the ESP Cryogen Curve Shanx, the hook also benefits from an increased wire gauge, too. This makes the hook almost 25% stronger than the other hooks in range – hook which were already up to 40% stronger than other PTFE coated hooks on the market.

Like the original hooks, the ESP Cryogen Curve Shanx benefits from an ultra long and fine needle-like point. This ensures that it can perfectly penetrate the mouth of any carp, ensuring a solid hook hold in a variety of conditions. In fact, this hook is one of the most versatile hook patterns on the market today! It features the same classic curve as the ESP Raptor hook but this time with an improved strength thanks to its cryogenic tempering and increased wire gauge. This makes the hook point extra durable and, in testing, there were very few cases of the hook point turning over – even after it had been in the mouth of a huge double figure carp – and no cases of the gape widening under the stress of a big fish fight. One of the biggest benefits of this hook pattern is its quick tunring, anti-eject shape. This ensures that you never need worry about the carp freeing itself from your hook in the water – in fact, it is so effective that it could almost be considered unfair to your carp. The hook also benefits from the same micro barb as the rest of the hooks in the range, ensuring that the hook hold is unparalleled. The hook can be used in a whole variety of presentations, allowing you to make the most of all scenarios on the water, and it is especially suited to the Ronnie Rig as it ensures that you have none of the problems associated with a traditional long curve shank hook.

The ESP Cryogen Curve Shanx Hook is available in a range of sizes, from a size four all the way up to a size 10 (omitted sizes five and nine as these tend to be the least popular in this style of angling). The hook has proven exceptionally popular during product testing and it really does look set to succeed on the bank. If you want to revolutionise your carp fishing this season then you need look no further.