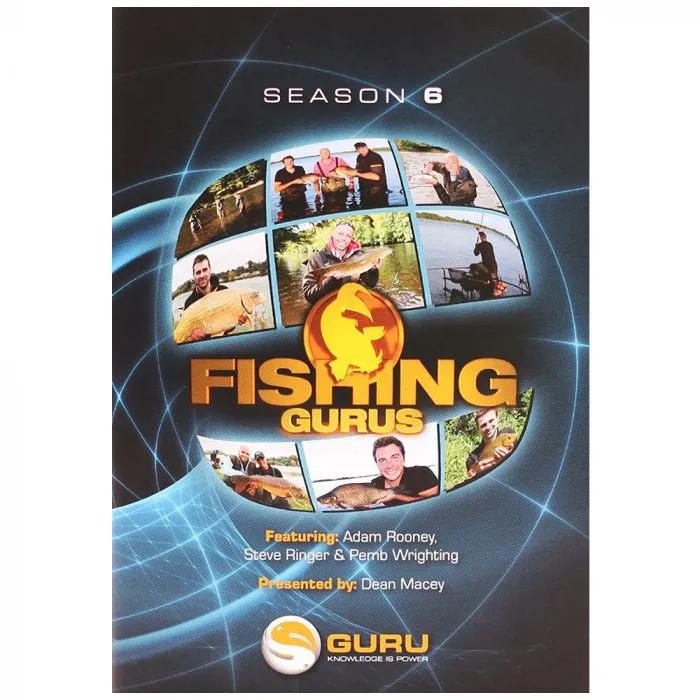 This item is currently out of stock.

Whether you’re an avid angler yourself or you’ve got fishing fanatic in your life, a fishing DVD is the perfect stocking filler and it makes an excellent birthday treat.

Whether you watched it first time around on the telly or you’re viewing it for the first time in DVD form, Guru’s Fishing Gurus provides over 180 minutes of entertainment, split into eight thrilling episodes. Series six of Fishing Gurus isn’t something you want to miss! What’s more, this DVD version of the series features tonnes of unseen footage, from bloopers to behind the scenes insights, so even if you did manage to catch the series first time around you’ll still be able to pick up on loads of stuff you weren’t able to see the first time around. Whether you’re a pleasure, match, or commercial angler, this really is a must-see series. The team take on a huge variety of venues, from the best commercial and day ticket waters in the country, to beautiful wild lakes and rivers both here in the UK and in the Republic of Ireland.

Episode one takes you to Norfolk’s beautiful Hinderclay Lakes. There, presenter Dean Macey and Guru’s Adam Rooney search for the crucian carp of their childhood dreams. Do they find it? You’ll have to watch the episode to find out! Episode two takes Adam and Dean into Hertfordshire. This is Fishing Gurus annual river adventure and the team tackle the best of the prolific River Lea. Episode three introduces Steve Ringer and Pemb Wrighting and the pair travel to Ireland to enjoy the best of the Irish fishing. Part one sees them tackle a wild southern Irish lake to fill their nets with silvers and hybrids. This is the feeder fishing episode of the series and it is a must watch for any feeder fanatic. Episode four brings you part two of Steve and Pemb’s Irish adventure. This time they head to an Irish lough on the hunt for big bream – and maybe a few other surprises along the way!

Episode five in the series sees Dean Macey on (and in) the River Wye and the decathlete-turned-angler gets waist deep in the water whilst float fishing for grayling and chub. If you’re interested in float fishing then this is the episode to watch out for! Steve Ringer joins us again for episode six in the series. This time he’s back on familiar territory, match fishing, although he hasn’t visited the venue for half a decade. Watch the episode to see how he gets on at Packington Somers Fishery. Episode seven is the first part of a thrilling two-part finale. This is a nail biting two vs two match between four of Guru’s top match anglers. Adam Rooney pairs up with Pemb Wrighting in order to take on Steve Ringer and Paul Holland. The venue? The specimen lake in the Larfod Lakes complex. Episode eight is the grand finale and it’s a nail biting end to another cracking Fishing Gurus series. Watch to find out which pair wins the bragging rights for the year!

If you’re an angler who isn’t always able to get out to the water then watching an episode or two is a great way to keep your hand in. This is also a great choice to bring down to the bank with you – simply stick it in your laptop, sit back in your chair, and pick up a few top tips from the tackle experts whilst you wait for your bite alarm to scream. The team at Guru has worked hard to create a thrilling series that will keep you on the edge of your seat – and they certainly haven’t disappointed with Series Six of Fishing Gurus.