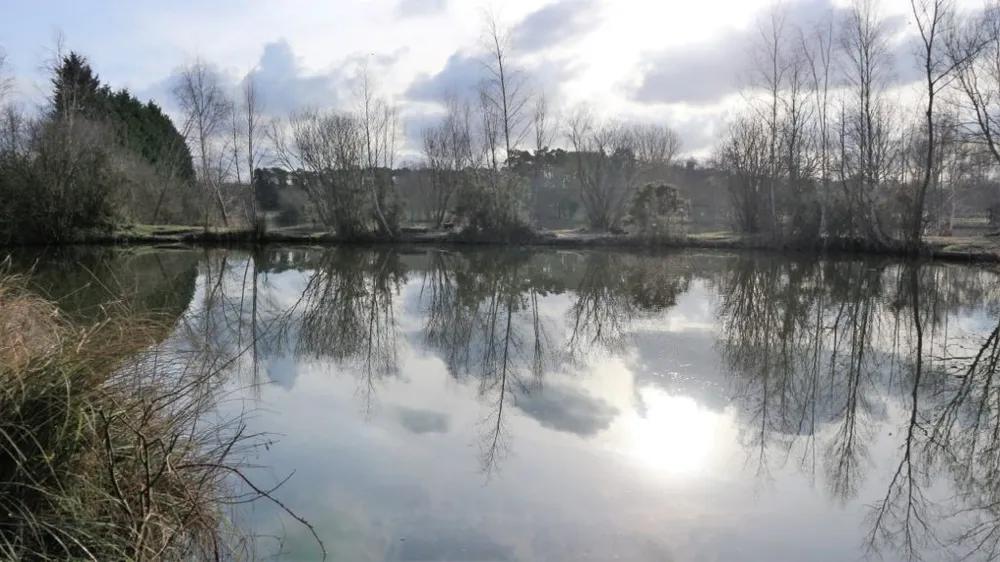 After watching my mate Andy nearly empty Birch Lake at Woodland Waters in late December, I just had to go back to discover the secret of his success. Was it the swim and his uncanny knack of picking pegs where the fish are shoaled up? Or was it the bait he was using? On the last trip he bagged up with sweet flavoured pellets, while I had struggled with a low oil fishmeal variety - along with casters and chopped worm - baits that worked so well the previous winter.

I decided to take the sweet route and opted to sit in a completely different area, to try and figure out if it really was the flavoured bait that was doing the business. It was freezing cold, plus the water was quite clear and I could see dark shapes moving about in the middle of the shallow lake. I didn’t fancy waving a long pole about over the fish, so I set up a small waggler on a soft actioned 12ft rod. 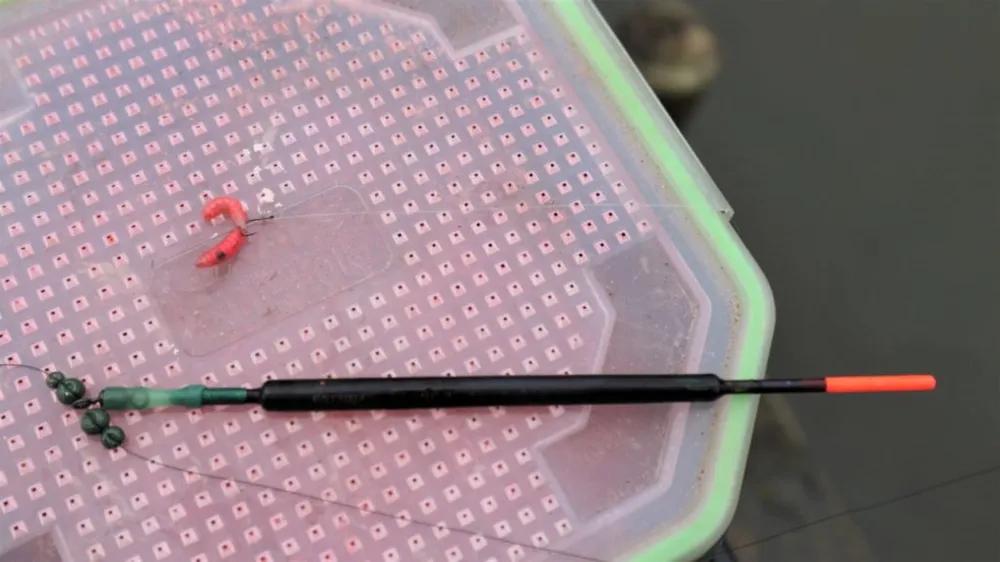 I had a feeling a lot of bait wouldn’t work at this time of the year and as the wind was off my back, I decided to try something a bit different. I discovered I could catapult 2mm sweet flavoured pellets a good way out and in quite a neat grouping. I reckoned if this was the type of grub the fish wanted in the middle of winter, regular doses should be just enough to provoke some interest. Although I was using a light insert waggler, I had tackled up with Advanta X5 0.14mm Rig Line, tied to a strong size 18 barbless hook. If I hooked anything big, I wanted to get it in. I planned to fish double red maggots over the loose fed micro pellets. 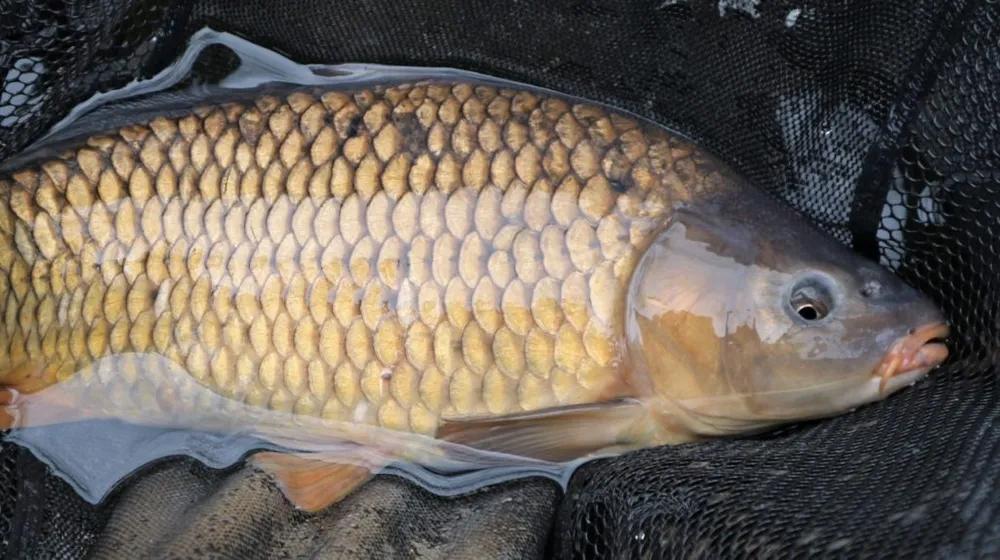 It soon became apparent that it was sweet pellets the fish wanted. As soon as I had fired out a few helpings of the micros, I could see lots of dark shapes moving around and stirring up the bed of grub I was creating. My waggler hardly ever got a chance to sit stationary for very long. This was like another world compared to my last trip to this small but interesting lake. I was latching into some lively, decent sized carp right from the start. This was much better than last time, when using much lighter pole gear and cupping in a mixture of baits, I had struggled for bites. 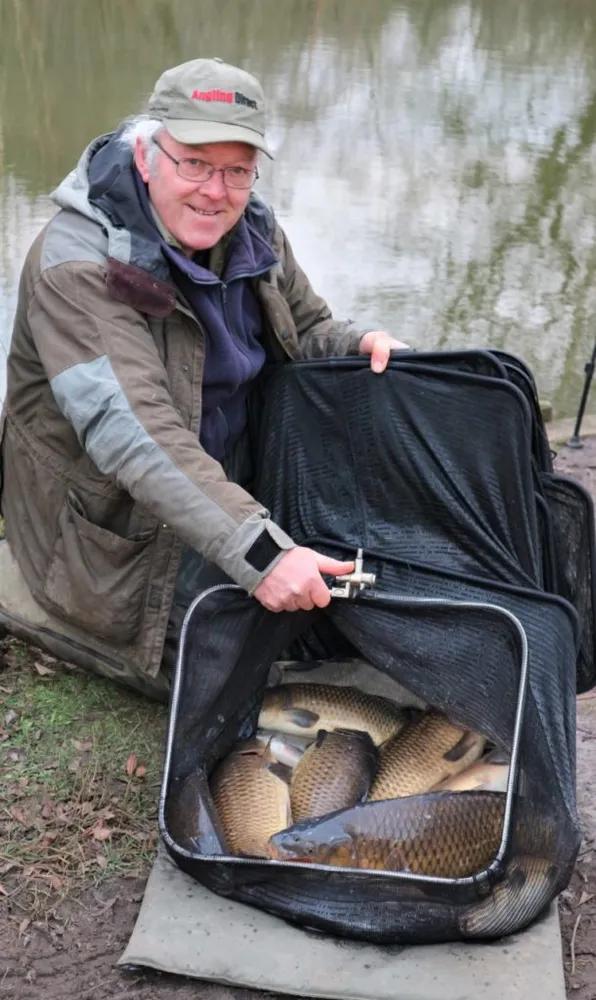 I didn’t feed any maggots, casters or larger pellets because the bites just kept on coming every time I fed a good dose of the sweet micros. The carp were really having a go, giving a great account of themselves when I connected with the positive bites, charging about all over the lake. I’m not sure I would have landed some of them on pole gear, because once hooked they were steaming off like rockets. I had noticed the week before when Andy had bagged up on the long pole, that a few good-sized fish came adrift as they charged off in such shallow water. But my running line waggler gear was coping fine.

During the odd lull in the main action, I experimented with some similar flavoured 4mm expander pellets, I had knocked up with the water drained from my micro pellets. This had given them the same sweet flavour and I started to catch some nice size skimmers on these, along with the odd quality roach. It turned into a great bagging session, while nobody else on the other lakes seemed to be catching very much in the icy, now windy conditions. I ended up with a netful. 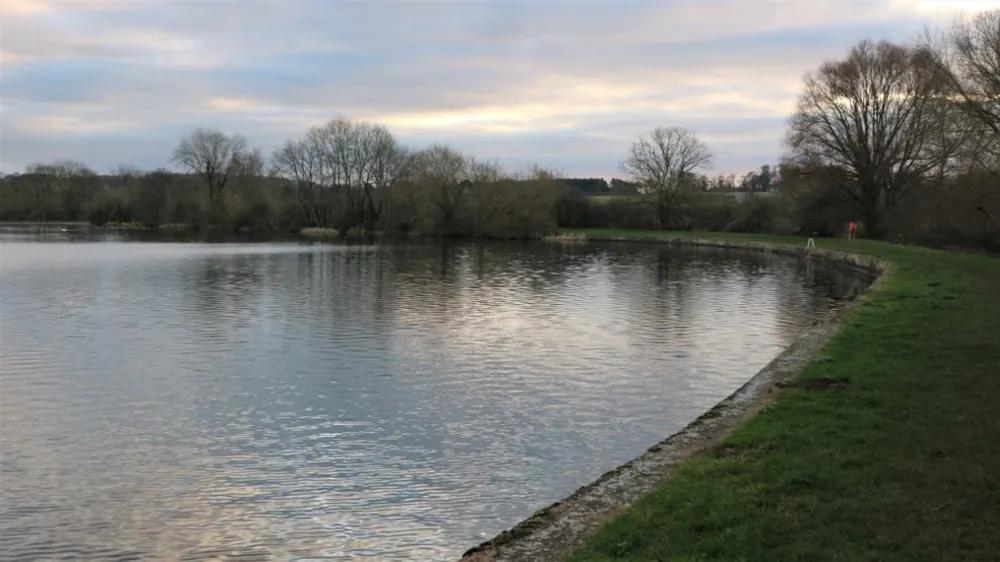 I got a text from my friend Chris to say he was going to give our local reservoir a go, just outside Grantham. I thought this was a strange time of the year to go there, on what I had always thought was a summer tench and carp venue. But as Chris has fished around the area all his life, I thought I’d tag along to find out what the score was.

It was quite a nice day for January, less windy than normal and pleasantly warm. The water was fairly clear and there was bright sunshine to begin with. Chris was casting to the horizon with a new Daiwa SLR long-distance feeder rod he was trying out for the first time, while I decided to drop a bit shorter with a groundbait feeder, because I soon discovered there was lots of weed to contend with.

It took a good hour before my rig was coming back without the horrible soft and slimy green bottom weed clinging to everything. Nothing was happening, so I went to have a chat with Chris, to find out why we were the only ones crazy enough to be attempting to fish on a venue nobody else hardly ever bothers with in the depths of winter… Apart from cormorants that is. 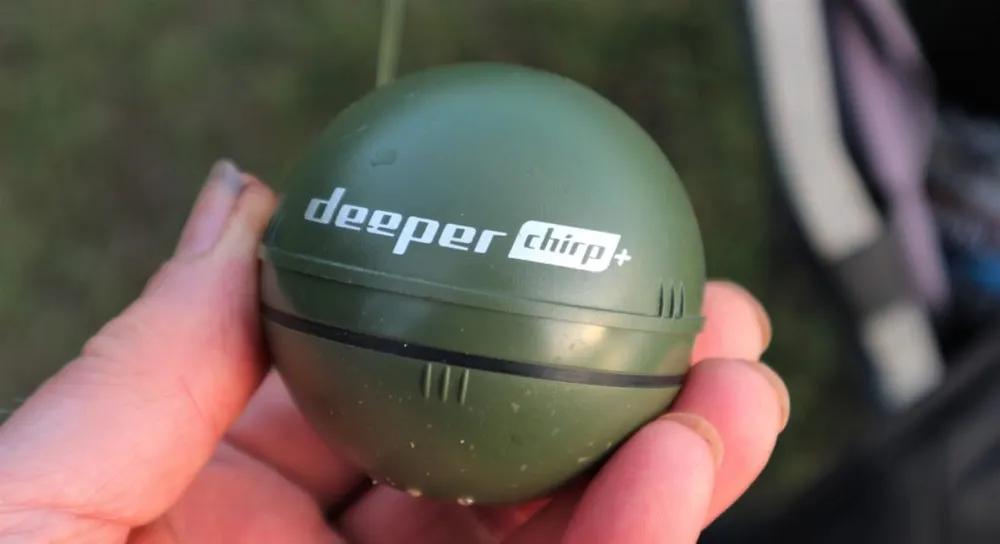 When I asked Chris the question, he proudly showed me his new Christmas present, a Deeper Chirp Plus sonar. He hadn’t had a bite either, but pointing to the screen on a tablet he had on his bait tray, it was about to reveal something truly amazing. He had the Deeper ball set up on a spare rod and cast it out a long way… 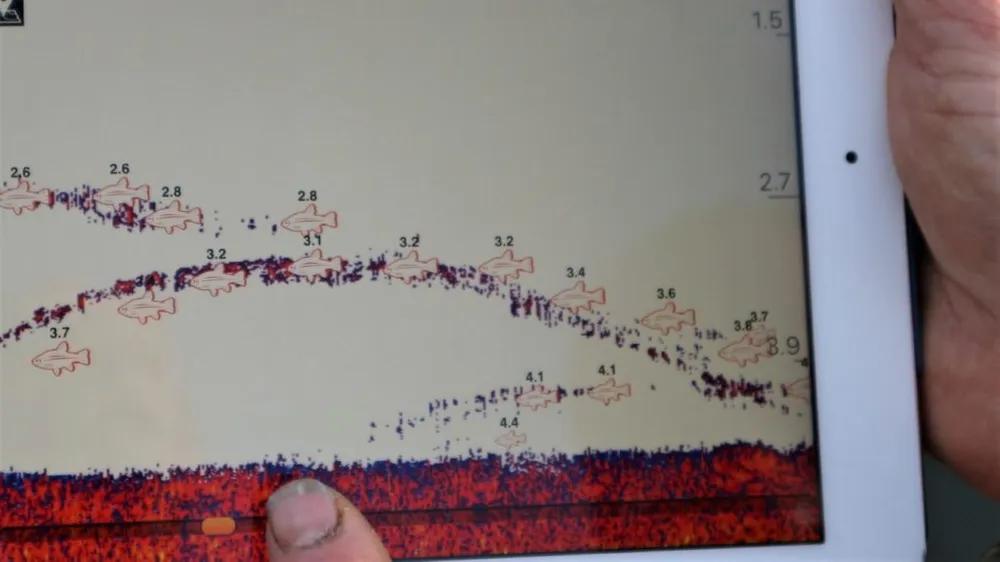 As Chris slowly wound in the sonar device, the screen on his tablet was showing signs of big fish all over the place. Interestingly, not many were on the bottom, most were hovering a few feet higher up, where there appeared to be a long line of suspended weed. It turned out we were sitting on a shed full! I quickly returned to my gear and set up a waggler. I thought if I started spraying out loose feed and experimenting with depth settings, that had to be the way to go.

We both fished hard for many hours but couldn’t coax a bite between us. Just to make sure, as it was getting dark, Chris cast out the Deeper device again. Just as many fish were showing up on the screen, the only change being they had all moved up even higher in the water. Although it was a dry net day, at least it was good to know it wasn’t due to our swims being barren of fish. They obviously just weren’t feeding. 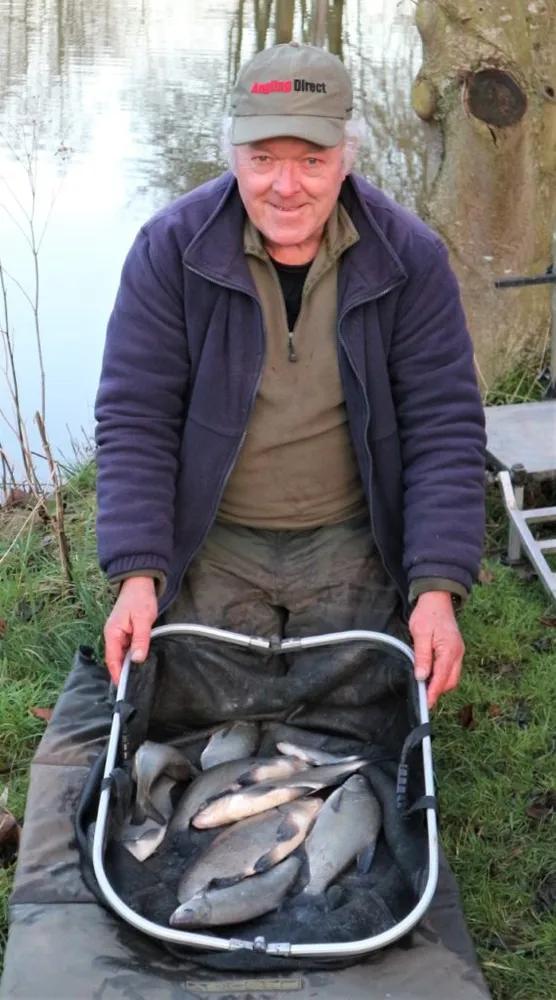 Next outing was a club match at Willow Lakes, Foston. The winter series has been a disaster for me up to this point, so I decided to do something a bit different to everyone else and try my new micro pellets and waggler approach. Normally this is a pole venue, aiming to catch down the track or tight to the islands, but with fish hard to come by over the past few matches, I fancied minimal feed might make a difference.

I fished the waggler just off the island opposite, well down my swim to try and avoid spooking anything that might be out there. I ended up catching 9 decent skimmers, but no carp, so I was well out of the running again. However, I enjoyed eking those fish out. A couple of bonus carp would have probably put me in the frame. 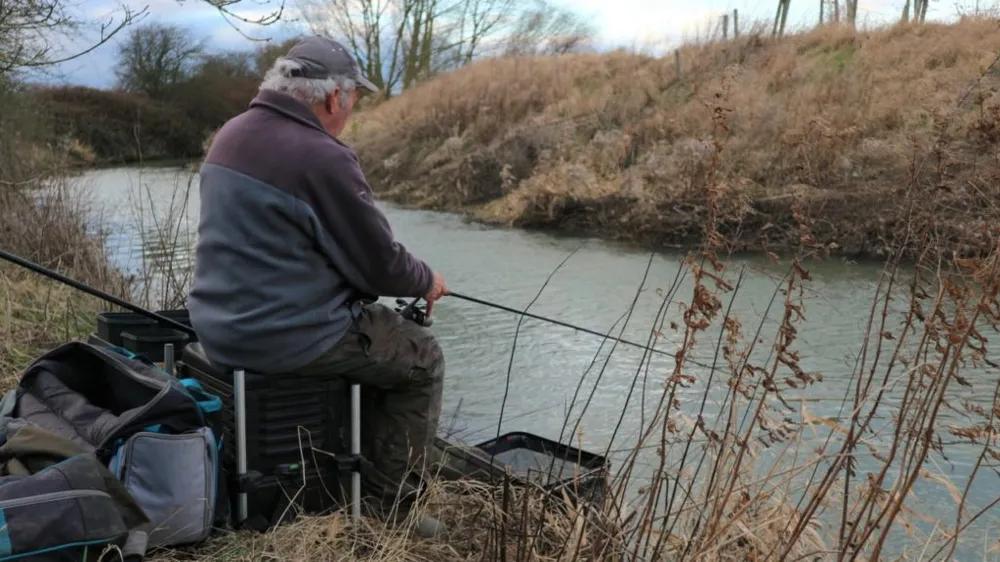 For months local rivers had been in the fields and running high with lots of dirty rainwater, so when at last I spotted the Upper Witham was fining down nicely, I was off there like a shot. I found a nice- looking run and although the current was still quite fast, it wasn’t boiling up, so I could just about get away with running a stick float through.

Such has been the weather this winter, it was blowing a gale again with heavy rain forecast, so my plan was to stick it out in my first-choice swim, rather than wandering around. Although it often takes longer for the fish to find you, at least with the static approach you can tuck yourself away in a sheltered spot and keep reasonably warm and dry. 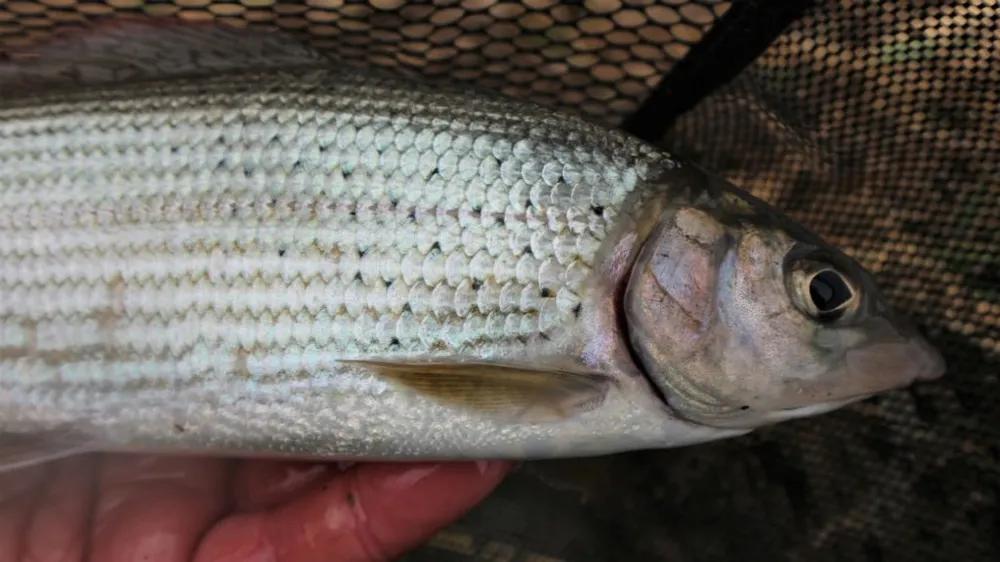 On this occasion it didn’t take too long to get bites, feeding hemp and casters, fishing double red maggots over the top. I caught several small grayling and then a proper one, just over the pound mark. It went dead after that and I had a to put a brolly up for a while as a cold front moved in and it pelted down with freezing cold rain. However, I kept plugging away and started getting a few bites again. A couple of good dace turned up next. 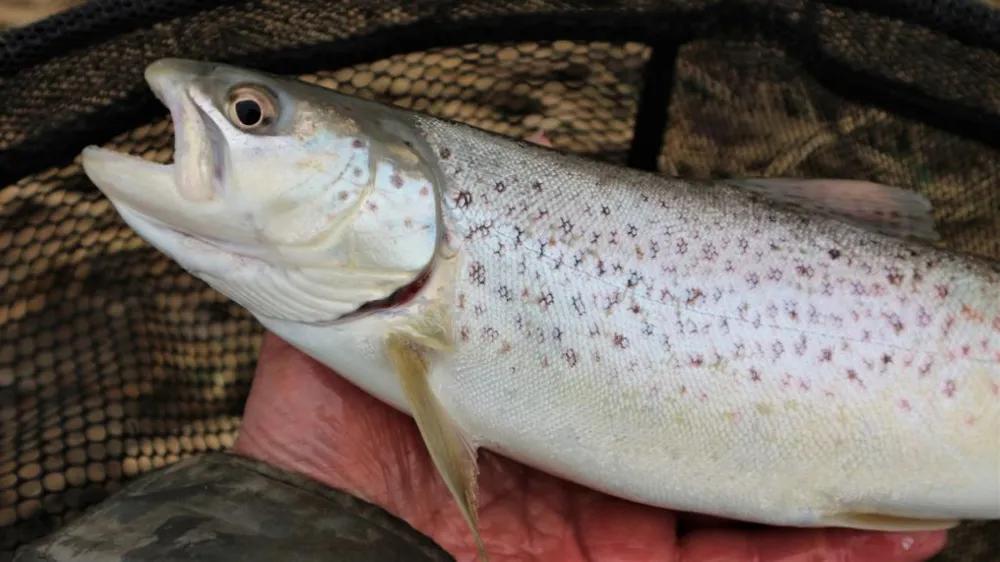 I was hoping for some of the river’s big chub to move in. I know a few have been caught recently, because the manager at Angling Direct Lincoln has been fishing the area and told me he has caught them up to 4lbs.

I suddenly got a bite right at the tail end of my trot and my rod took on a pleasing bend. I carefully played the fish up under the rod tip, but then it went a bit scatty, darting about too much to be a chub. This lively trout ended up in my landing net. I did catch a 12oz chub after that and a few more dace. An enjoyable session but not a brilliant one. 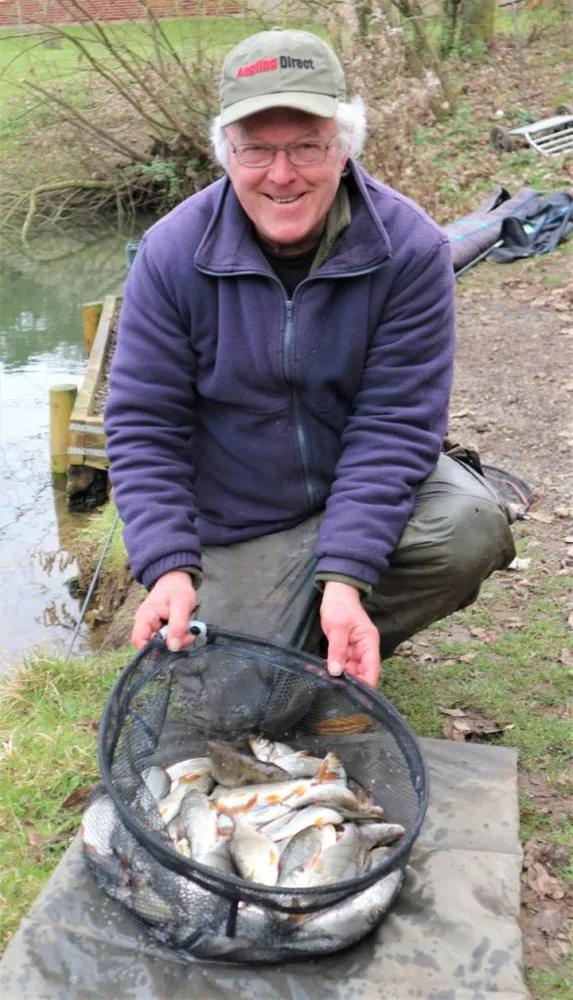 At the end of the month, Angler’s Mail photographer Ian Chapman was coming to Grantham to do a photo shoot with me. The best place I could think of, bearing in mind that the icy cold, windy conditions had returned, was the other small lake at Woodland Waters. Back in December, the Small Carp Lake as it’s called, had produced all sorts of surprises. I asked Chris to come along too, as I needed to get a good catalogue of action and catch shots for my features.

I set up my shallow waggler rig again, with line strong enough to handle any carp if they turned up. I picked a swim with the wind behind me and fired out a good bed of sweet micro pellets, aiming to repeat what I had done on Birch Lake a few weeks previously.

However, something completely different happened. It was a bit slow to begin with, so I tried firing out a few casters and to my surprise the water erupted with roach and rudd. There were some good ones out there too, swirling for the loose feed. I thought to myself when its this cold, a bite a chuck will be most welcome and that’s what happened. In the end I managed to feed the fish in close enough to speed things up, bagging on a light pole rig for the last hour. I finished with a nice net of quality roach, along with a sprinkling of skimmers, perch, rudd and gudgeon. 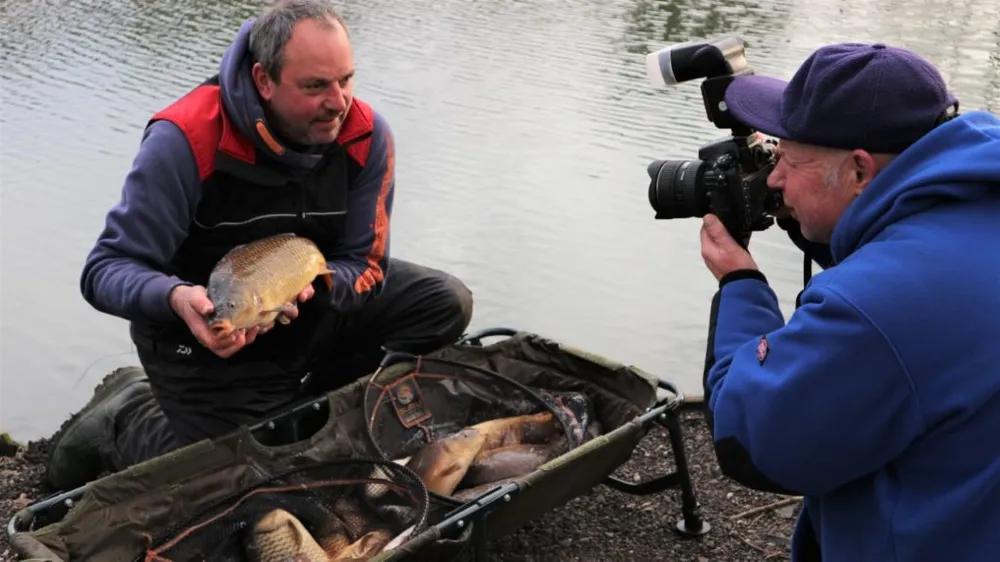 Meanwhile, on the other side of the lake, Chris had been experimenting with a Black Cap feeder rig, something he had seen on the Internet, as a forgotten stillwater carp tactic. I always thought

Kamasan Black Cap Feeders were for river fishing, but as usual the Grantham fish catching machine was proving otherwise, casting a small, light blockend tight to a sunken island, bagging up big time with some fair-sized carp. He was using a long hook length, filling the feeder with hemp and just a few maggots. The carp were homing in on this and he nearly filled up a specimen fish cradle with them, when having a catch shot taken.

Once again during January, we were the only anglers mad enough to be out in the arctic conditions, but on this occasion it paid off and we both caught fish all day long. It’s great when you become so busy catching fish that you don’t even notice the cold. (Well, maybe just a tiny bit at my age!)
Search
Categories
To top