Meet our 2016 King of the Catch Runners-Up

This entry was posted on 7th December, 2016 by Jacob Robinson 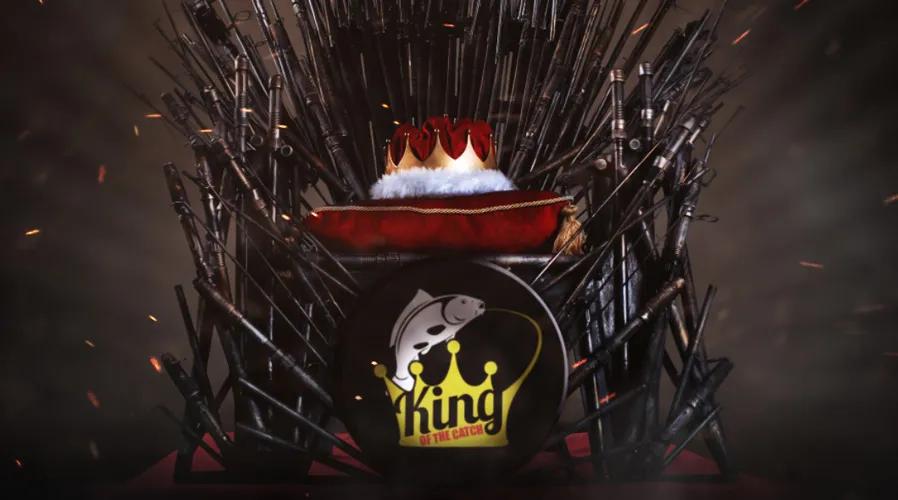 Our 2016 King of the Catch was the hardest fought edition of the competition to date – with more entries than ever before. Unfortunately, there could only be one winner in each category but that didn’t stop our second place anglers from giving them an incredible run for their money. In more cases than one, this battle took the competition right down to the last day of voting! Here are our 2016 King of the Catch Runners-Up Catch Reports – in their own words… 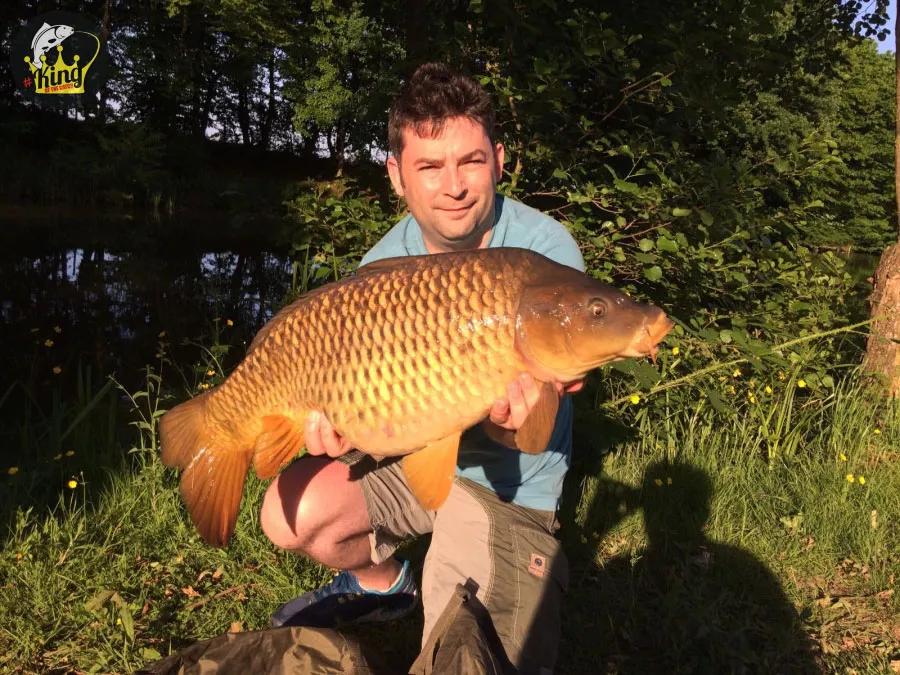 Pascal Beevor – Carp Fishing Runner-Up I caught my winning carp on a two-night session – my first in over a decade and a half! I used to be an avid angler but, as I’m sure most can relate to, the hobby had to be dropped as life got in the way. I’ve wanted to get back into angling for many years but the main reason I chose now? To get away from the Mrs and our teething baby! At 15lb 6oz, I’ll be the first to admit that this isn’t the biggest carp in the world, but I was over the moon as it was my first catch after a 15-year break from the sport! What’s more, it was also my first two nights of good sleep that I’d had since the baby had been born. It was caught using my good old DAM Andy Little Rod and my Shimano Baitrunner reel – both purchased with my pocket money all those years ago and still going strong today. I topped off this setup with some new tackle I had purchased for the occasion, including the best and most important item – an Advanta Endurance Six Leg Session Bedchair. It’s the business! 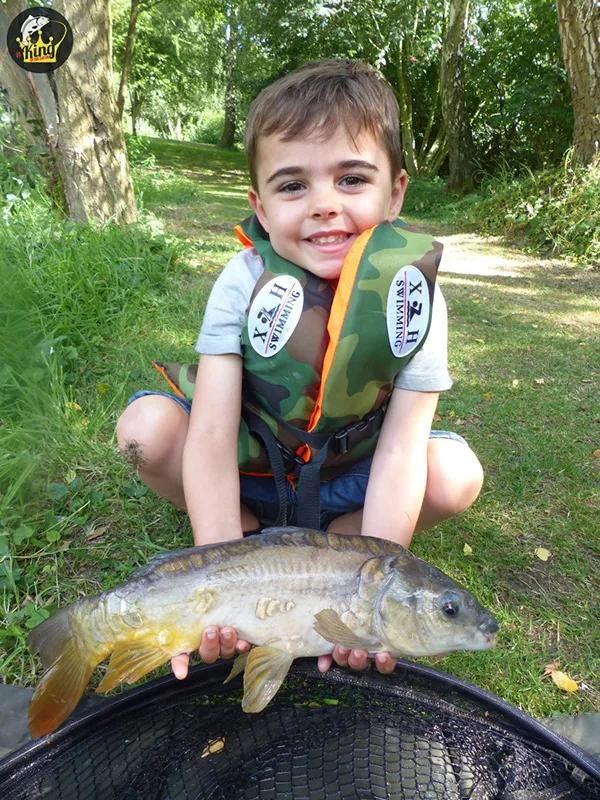 On the 17th of August, I decided it was time for my four-year-old Ashton to make a little jump from silvers to small carp. The venue chosen for this step-up was Reepham fisheries. I wanted somewhere that I knew he stood a good chance of catching to keep him interested. Our armoury was to be a small and very old Abu stalking rod with an equally old, small Shimano reel. We used a very simple waggler going down to a size 10 barbless super specialist hook, loaded with a chunk of tuna cat meat, and we fished it so the hook just lay on the bed.

He dropped it into the water right in the margin, only about a foot from the edge. After only a few seconds it started to twitch. "Get ready," I said "here it goes!" and it did. It disappeared under the surface in the direction of the middle of the lake. He struck, but nothing connected. These fish were obviously hungry but weren't silly.

The hook was baited again and he dropped it back on the spot. It didn't take long before the float was twitching again. After a couple of slightly longer bobs, it was off, heading for the middle like before.

‘Strike!’ I blurted. He whipped it up and bang he was in. This was it, his first experience of playing an angry carp. It was putting a reasonable bend in the rod and even took a little line off the spool; Ashton was loving it. After about a minute its head was up and I scooped it up with the landing net. He was thrilled.

‘You did it matey, high five,’ It was a stunning little mirror. We zeroed the scales and hooked the net on. They swung to 2lb exactly. ‘Brilliant work mate!’

He went on to catch a few more, some that were a bit bigger, but this little 2lb mirror had to be the fish for the competition as his first ever carp he caught – hopefully the first of many! 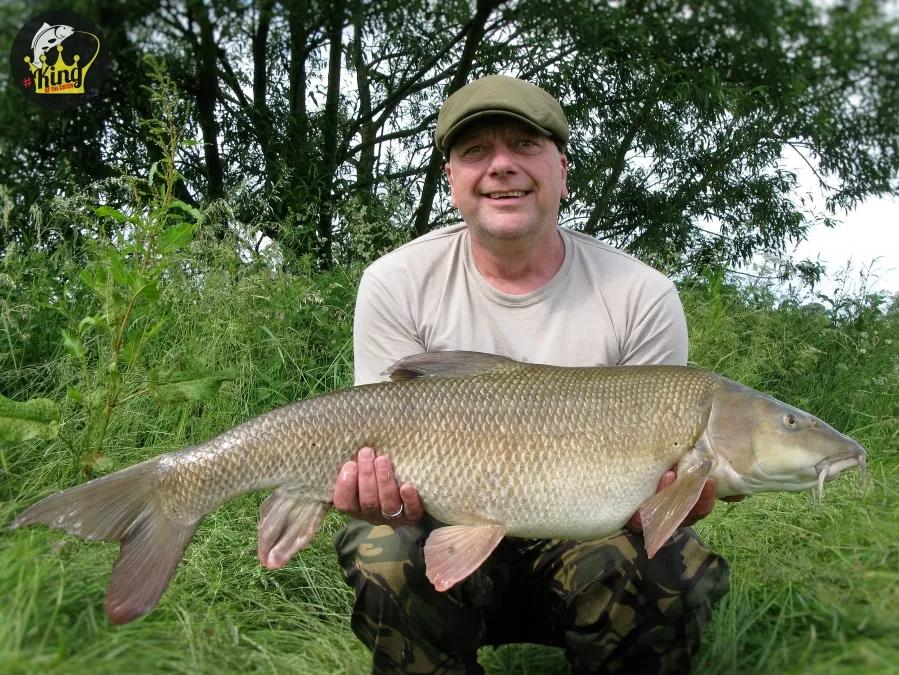 It was opening day of the river season, as well as my 50th birthday, and, like every start of the new season, I went fishing. I had fished a couple of swims on the Nene with no joy so I took a wander up a backwater and noticed one of the busy swims hadn't been fished. I put a bit of bait in the swim, left my gear there, and let it rest for a couple of hours. Once back at the swim I carefully lower my rig in, which consisted of size seven SSP hook, 15lb Cortex hook length at 18 inches and a 3oz lead. The river was up and had a good pace on it. Onto the lead I attached a PVA bag filled with broken boilies, then attached the hook length to it as the swim is tight and I didn’t want it to go in the tree branches. I fed a steady stream of broken boilies into the water and the bite came a few hours later. At first I thought I'd snagged on the bottom – until the bottom started to move upstream! It took a few attempts to guide her in the net. The rod I used was Kodex Barbel twin tip, the line 12lb and a Daiwa reel. 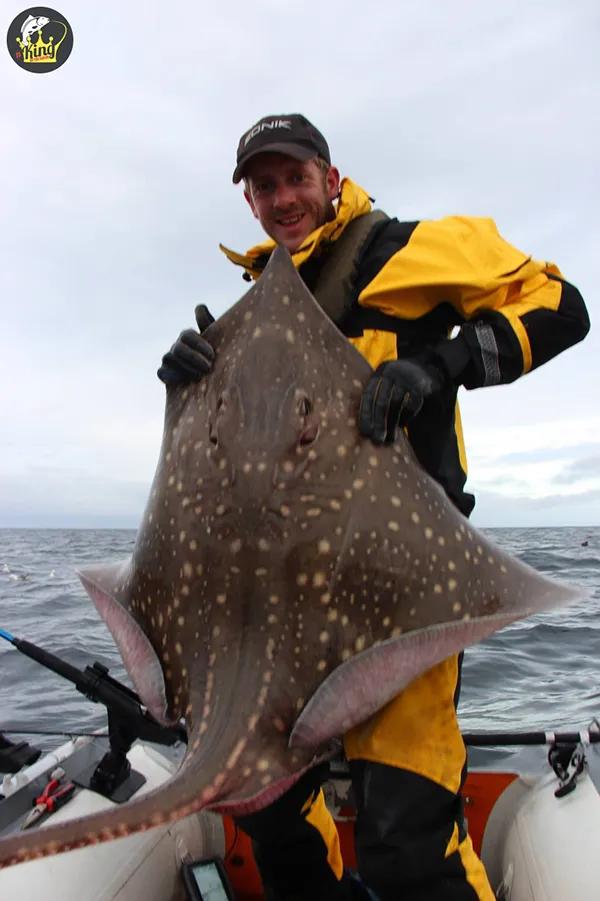 The skate was caught on a recce trip to the Shetlands, where we had planned to primarily target cod. We had seven days to fit in as much fishing as possible but only managed two due to the extreme and ever-changing weather conditions up there. I was fishing from 2.7m RIB with a 4hp engine, along with my mate who was on his kayak for some of the time. We were fishing approximately 2 miles off shore into 300ft of water, dealing with 3-4m swells, changing wind directions and strong tides.

My set up included Sonik 20-30lb S4 Boat Rods and 2000 size Charter Special Multipliers loaded with 37lb braid. I caught most of the cod on a mixture of large Hookais, and 12oz perk barks with Cox and Rawle Meat Hooks loaded with 6" orange curly tail grub from Lure Factors. Weights varied from 12oz to 16oz, to hold bottom. The bites were pretty incredible with well over 50 cod banked over the two days, averaging 15lb.

I managed to pick up a few huge mackerel on the Hookais so decided to rig up and see what fancied half a mackerel.  Fishing a 16oz ball lead with a short but strong leader and large C&R Meat hook I lowered the bait down.  My first fish to this method was my PB Cod of 22.13oz.  The next drop was my first ever skate of about 30-40lb. This was on day one.

On day two we struggled with wind direction against the tide but eventually worked out a reasonable drift. I went all out to get some more mackerel and have a go for another skate. After a few cod I eventually saw the rod tip arch over. My first response was ‘I’m snagged!’ and my mate replied with ‘what, over sand?’

I got ready and lifted. It took 20 minutes to even get the fish to move with the light-ish tackle. Once I got it to move it began stripping line and then slowly towed us further out to sea! A 30-minute battle ensued and eventually the fish surfaced. I couldn’t quite believe my eyes. We have averaged the fish at 70lb+ but didn’t take any measurements.

I have now stepped things up with the Sonik 30-50lb S4s and much stronger braided mainline and shall be heading to Oban in the near future! 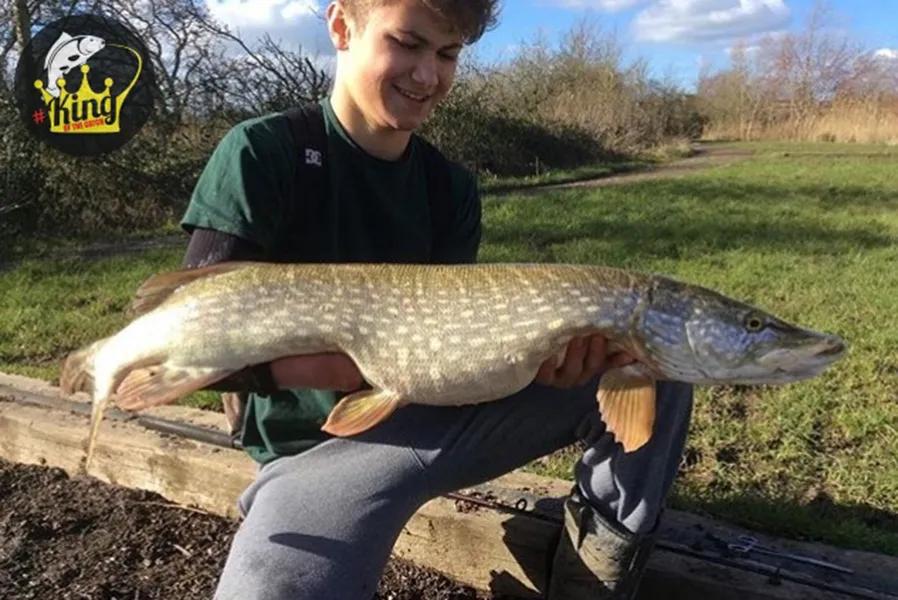 My dad and I had decided to go pike fishing at Todber Manor Fisheries on a cold winter day, just to chuck around some lures on one of the lakes (Wadmill). We had a very successful day with roughly eight pike each, the biggest being about 7lb/8lb. We were using Delta Spear jig heads with Herakles Vobbler Shad Swimbait Jelly Bodies. After around four hours of walking around the lake, I spotted a pike along the margin by some weed. I cast my lure about 5 yards behind the fish and reeled in with a steady retrieve... BOOM! She had it! I'd hooked in to the pike for two seconds before... PING! She was gone, the hook pulled and I saw her dart into the weed again.

I began to reel in as fast as I could and then cast straight back into the same spot. The fish was back for another go and this time I wasn't letting her come off! As she darted towards the reeds, taking line, I locked down my drag on my Sonik FS6000 reel and bullied the fish away – I struggled a little at this point as I only have one hand.

I shouted at the top of my voice "Dad! Dad! Get the net!"

My dad sprinted over waiting for the pike to surface and once it did we only just managed to get it in the net! I mean the fish isn't the biggest of pike out there but it's my biggest pike and that's all that matters! After weighing the fish at 14lb we took the photos and let her go back to get bigger and fight harder another day!

All our runners-up have received their £1,000 Angling Direct gift card, as well as a host of other goodies, and we know they’ve been enjoying making the most of their prize. All that’s left for us to do is to wish them all one final congratulations, for a competition well fought!
Related Products
Search
Categories
To top