This entry was posted on 8th September, 2018 by Jacob Robinson I normally find myself trying to avoid catching bream. But on a recent trip with the media crew from AD the plan was for me to fish with Advanta RVS rods in an attempt to get a few bites in between filming some product videos for work. I arrived at Catch 22 lake in North Norfolk before the other guys, so took the time to have a good look around. I have fished the lake on and off for many years for both carp and specimen roach so I had a fairly good idea of a few areas worth fishing. Most anglers who visit Catch 22 will do their best to avoid the bream, as they have tunnel vision for the carp. But with the right set up an enjoyable, busy day can be had from catching large numbers of bream with the chance of a bigg'un or two along the way.

I had found an area on the end of the wind that looked perfect. An area of gravel was soon located with the marker at a comfortable 40 yards range. Gravel, 9 foot deep, with the wind pushing straight in my swim…perfect!

Bream absolutely love pellets! So I spodded 10 spods of a mixture of 6mm low oil carp pellets, sweetcorn and 12mm boilies. The rods where set up helicopter style with 45gram groundbait feeders. Short stiff 6lb fluorocarbon hooklinks with a 12mm boilie attached to a size 12 hook. By the time the other guys had arrived I had baited the swim, marked the rods at the correct distance and arranged the swim ready for the planned product photo’s, but I was yet to cast out.

I would say my rods were cast out at 11am, by 11.03am I had two bream in the landing net as both rods had been picked up almost instantly! Chris remarked that it didn’t take long at all and we took a couple of photo’s of the first two bream just in case the rest of the day was slow. I didn't need to worry! I can only describe the following few hours as ridiculous. It was almost impossible to get two rods cast out at the same time. Quite often I would have a bream before clipping the bobbin on the line.

In order to get the required videos and photo’s done I would have to reel the rods in several times during the day. But each time I reeled in I would top the swim up with 6-7 more spods to keep the bream in the area.

I wondered how many can I catch today if I keep the bait going in and persevere? The answer was 72 bream between 11am and 7pm! The biggest weighing 9lb 10oz. I feel the key to catching numbers of bream from carp venues is bait! The bream are a by-product of a successful carp fishery. They have thrived on the fact that the lake sees so much good quality, high protein bait. So turning up with half a pint of maggots and a bag of ground bait is not the way to target them. Their natural food is pellets and boilies, so a scaled down carp type approach works best. Small boilies, plenty of pellets and corn. A mixture of fishmeal, groundbait and damp pellets in the feeder. Regular topping up of the swim with bait plays an important part too, either by recasting the feeders frequently or topping up the swim with the spod. It’s also important to be as accurate as you can. Even when the fishing was hectic I noticed if I had a missed cast, and didn’t quite land the feeder in the baited area, it would take much longer for a bite.

I don’t think I’ve ever caught so many bream in a day before. I’d estimate that I caught approximately 350-400lb of bream! While I appreciate bream aren’t every one's cup of tea, I thoroughly enjoyed the day and hope that those who are interested can take a few tips away from my experience at Catch 22 to improve their own catches. 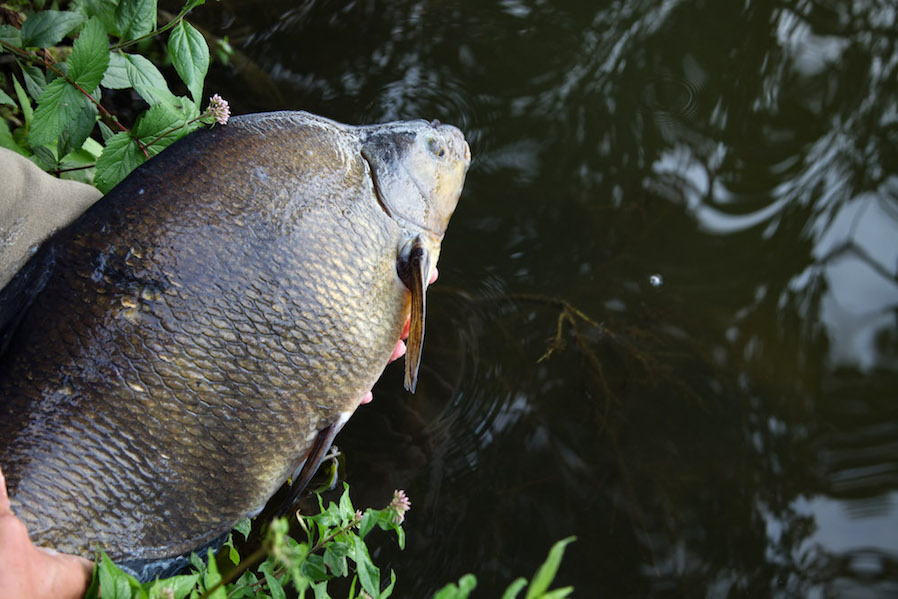