This entry was posted on 13th June, 2017 by Jacob Robinson 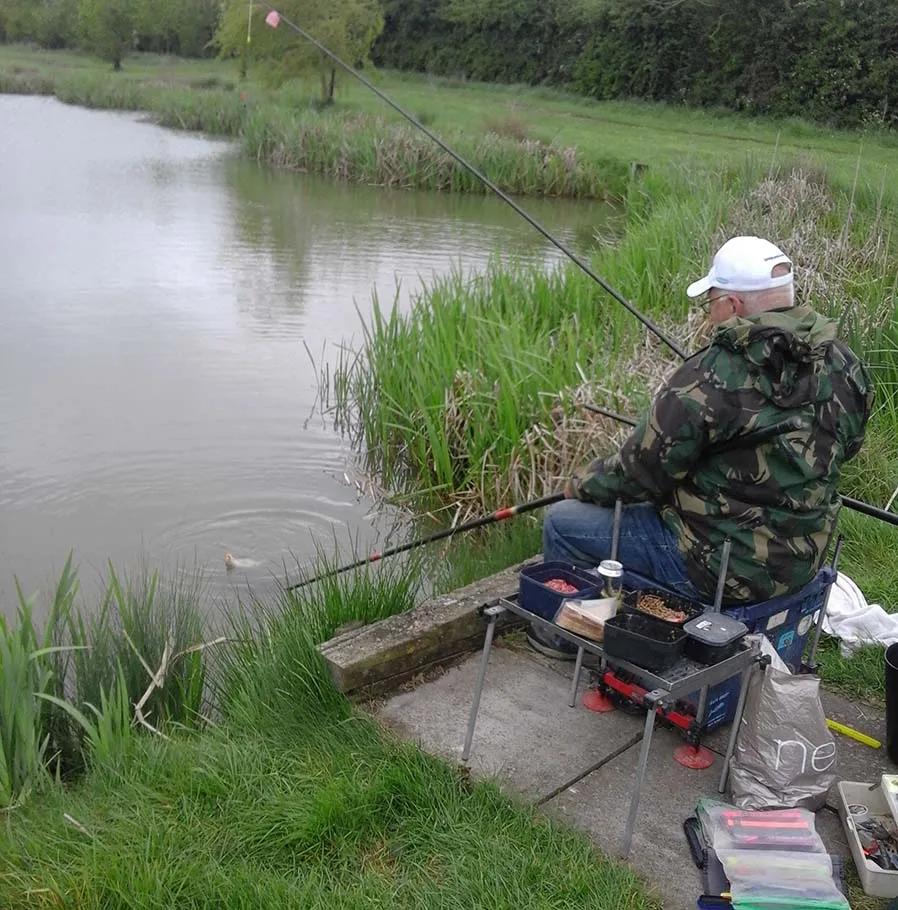 COLD START It was chilly in early May and I had arranged an outing with Malcolm from the local Ropsley Fishing Club. Malcolm lives just outside Grantham and had promised to show me a new venue, Homeclose Fishery, which is 5 miles west of Melton Mowbray at a place called Wisendine. There’s four well-kept lakes on this complex and we opted for the furthest one, mainly because it was completely vacant and we could get the bitingly cold wind off our backs.

Malcolm set up his new Daiwa pole (purchased from Angling Direct Lincoln of course!) while I opted for a 13ft float rod and waggler tackle. It was a slow start, but alternatively feeding 4mm pellets and casters by catapult gradually brought my swim to life. (You can’t use groundbait by the way, except in a feeder). First bites came to double red maggots on a size 16 hook, resulting in one decent skimmer and a couple of hand sized ones. Next door, Malcolm was dripping in bait every put in with a small feed cup attached to his top kit. It took a bit longer to pull fish into pole range, but eventually he started catching skimmers too.

I began missing bites on maggots, so I experiment with double caster on the hook and this really made a difference. Suddenly I was latching into good sized skimmers - virtually every cast. The average size was between 1 and 2lbs but they gave a good scrap on light gear. Malcolm was catching well too by now, similar sized skimmers and a couple of bonus tench.

The skimmer action slowed for a while, not surprising, because it was freezing! Later I got the fish back by switching to soft 4mm hooker pellets and ended up with a decent catch – a nice day’s fishing in the circumstances.

WARMING UP My next outing was to Denton Reservoir, run by Grantham Angling Association. Thankfully the weather had warmed up considerably, but possibly not long enough to wake up the inhabitants of this gin clear venue. There were lots of carp anglers about because the water holds some mega sized specimens, however, I was after the other species such as tench, bream, roach and perch. It was rock hard, but talking to the carp angler next to me I discovered a double figure tench was caught a few weeks back (accidentally by a carp angler) and that there are some mega bream in the water. One missed bite on float gear was my only hint of action; I didn’t see anyone else catch anything either. I’m not put off just yet because I met a chap in the pub where I live and he showed me a photo on his phone of a mega tench haul from Denton, including fish up to 7lbs. A return visit is definitely being planned! 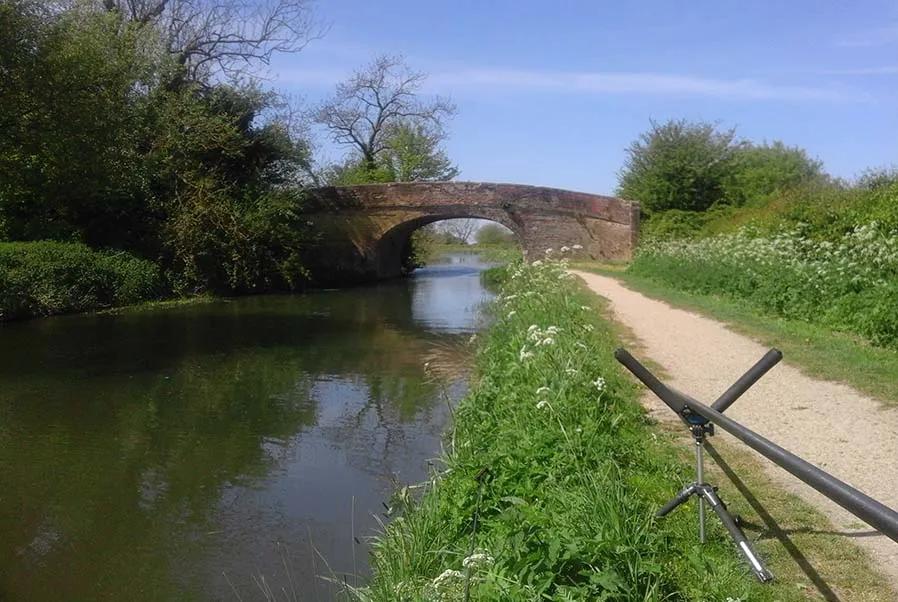 GETTING CLOSE My next couple of outings were exploring the Grantham Canal. This is a tricky venue because you need to find an area that’s not totally covered in duck weed. Sometimes this horrible stuff is as thick as grass and miles of the waterway can be totally unfishable. However, as I’m getting familiar with the place, you can normally judge by the prevailing wind conditions the best spots to aim for.

I first enjoyed a decent session downstream of Woolsthorpe Locks, close to Longmoor Bridge. A persistent westerly wind had blown all the surface weed away and the swim just below the bridge looked spot on.

Nothing big, but I caught all day on the long pole. Roach and rudd to 12oz, a small skimmer and a couple of small perch, mainly using casters over groundbait. Maggots were being blitzed by tiny rudd, so I used dark casters on the hook to get through these and find a slightly better stamp of fish. I ended up with around 12 lbs. The water only had a tinge of colour so the winning rig had a light 0.08mm hook length, combined with a size 20 fine wire hook, a light silver fish pole float and strung number 12s Stotz weights.

Next trip was to the Grantham side of Casthorpe Bridge, where a small track leads down to the canal. There’s a bridge here too. The western side was gin clear, while moving the other way towards the turning bay, there was a stretch of around 60 metres with good colour. The floating weed wasn’t too bad but still a nuisance, that is until a local angler called Chris joined me. He threw a rope - with short pieces of foam lagging installed - across the canal just above me. The rope had a heavy weight one end and the other end was tethered to a bank stick. No more weed after this floating boom was in place; nice one Chris! (I have now made one of these). I started catching well after this, taking several tench, some good-sized skimmers and a few decent rudd. This was only a short afternoon stint so the plan was to return the following Sunday, as my mate Andy was traveling up from London… 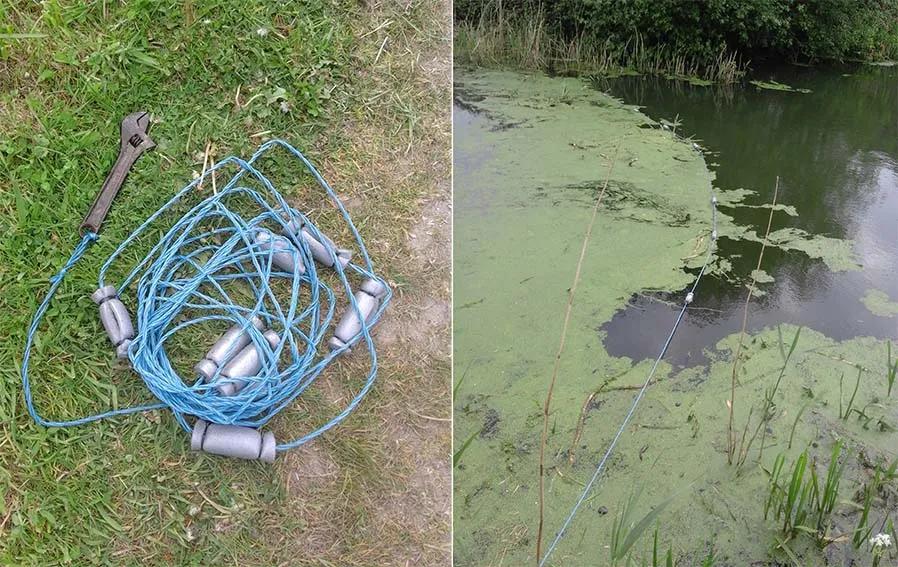 RED HOT Although the wind had completely changed direction when we arrived back at the same place the following Sunday, the stretch was still fishable thanks to a bottleneck of rushes that was holding the floating weed back. There was still good colour in the water and Andy and I reasoned this must be caused by fish. We were right. I enjoyed a great day’s sport, mainly catching down the middle in the deepest part of the cut. The tench were not big, averaging around 2 lb a piece, but boy do these canal tincas fight well! Even using a 3-lb hook length and number 6 to 8 pole elastic, it was touch and go a few times trying to tame these wild fish. I also added some nice skimmers, along with some chunky roach and rudd, ending up with well over 20 lbs. Andy seemed to be on the edge of the shoal and couldn’t find anything decent, but still finished with double figures of small fish. 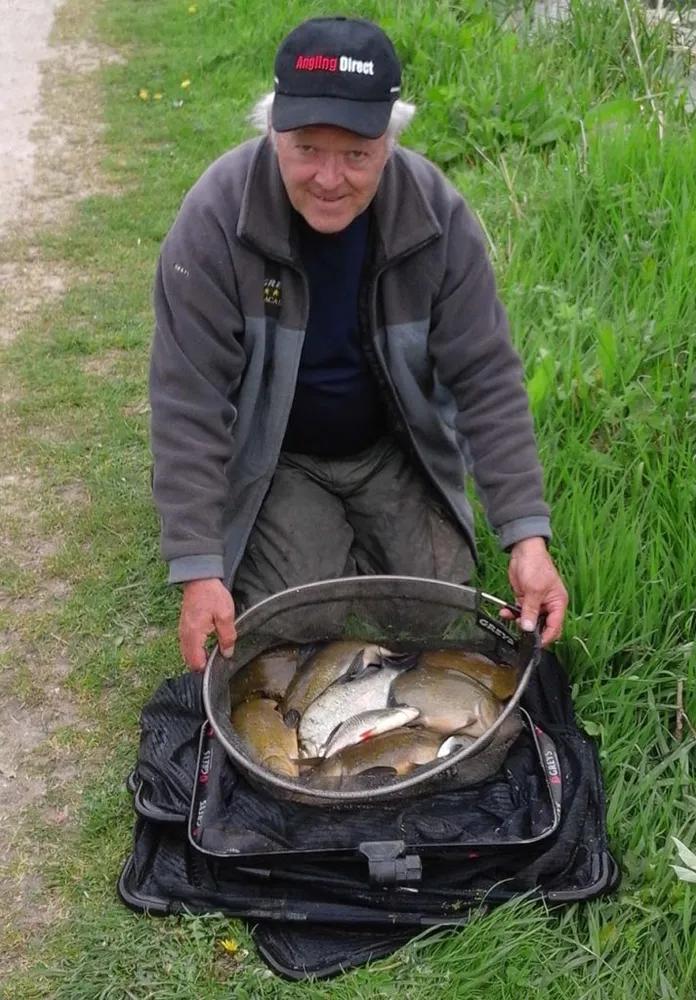 Twenty pounds plus is a good weight from any canal in my book, so I returned a week later. No weed this time but the area where I had caught before had gone gin clear. I could see the bottom so I explored the other side of the bridge, around 200 yards towards Casthorpe Bridge. The canal was very coloured here, plus there were shoals of rudd and roach on the surface everywhere. Interestingly, below these I could just make out the dark shapes of some decent sized bream.

It was a bright sunny day so I picked a shaded swim where the canal is a bit wider, having good far side cover as well. I fed soft groundbait laced with casters and hemp down the middle, also a big pot of chopped worm and casters tight to some rushes on the far bank. My deeper rig down the middle scored first, finding a nice bream of 2-lbs and a couple of smaller skimmers. I then tried long with a dibber rig and caught two more bream and a decent tench in successive casts. Back down the track again and it was a bite a chuck. I had to use double caster on a size 16 hook to get through the bits, anchoring the hook bait slightly over-depth. More skimmers followed and I thought I was going to empty the place. But then I started bumping out of good fish - three on the trot.

After that I managed to land another bream but it was foul hooked in a fin. My swim was fizzing with bubbles so I guessed half the problem was too many fish such shallow water. But then bream started chasing about in the rushes 50 metres away, so it dawned on me they were only partly interested in feeding and mainly involved with spawning. I caught a few more but lost a lot more! Another 20-lb plus catch but it could easily have been double that!

A week later and Andy was back in town so I took him to my new hotspot. It was still weed free and coloured, with fish moving everywhere again. I picked a swim a bit further up from last time, where the far bank looked particularly inviting with lots of cover and dark water. I fed down the middle and across, but all the quality fish came on the closer line. Plenty of tench, a couple of skimmers, roach and rudd, with a couple of the latter around the pound mark. I got blitzed by small fish on the far bank line but another nice 20 lb plus haul resulted.

Andy had double figures again, with a couple of lively tench and one decent bream included. Nice fishing considering the general state of this shallow and weedy cut. My advice is to find a weed free area that’s also coloured, which generally gives away where the fish are. 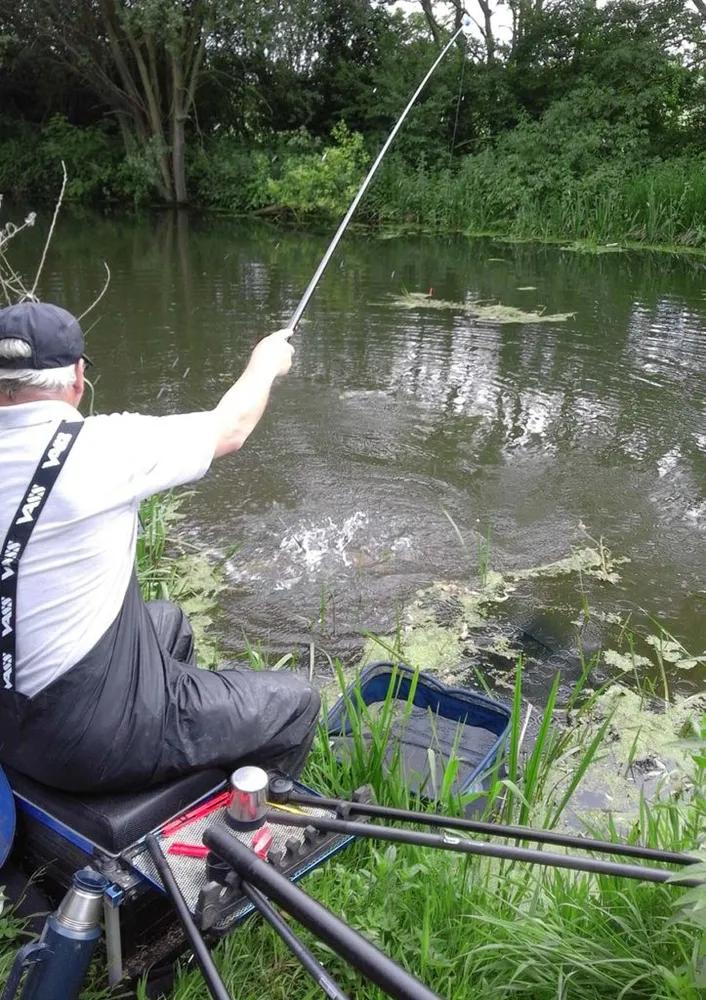 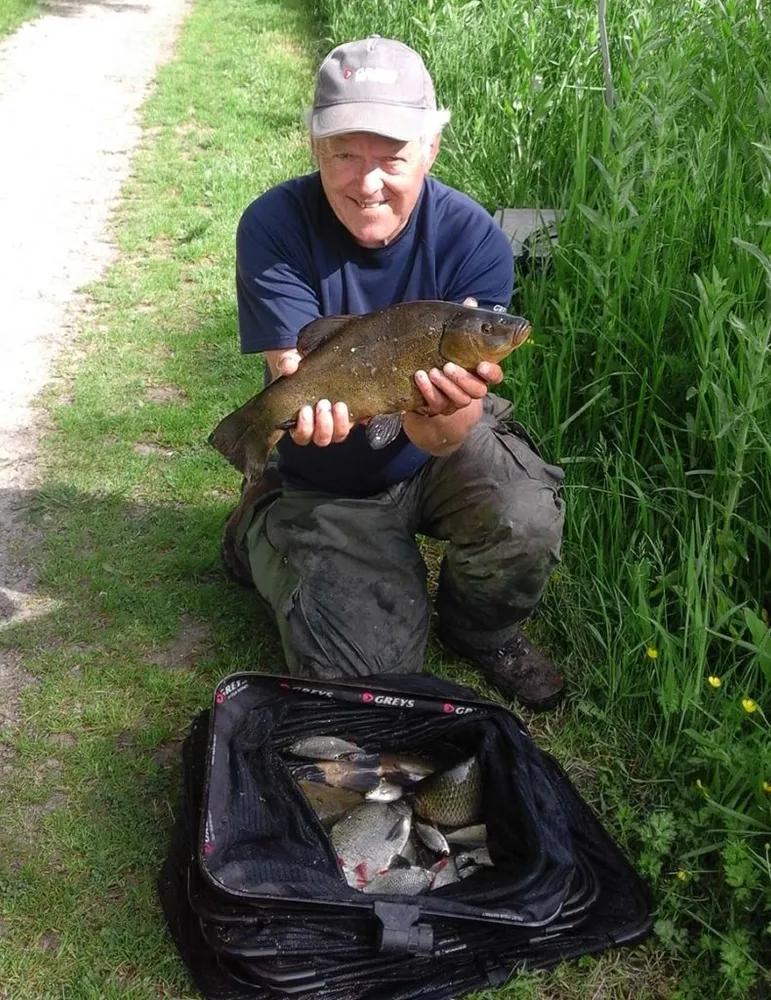