This entry was posted on 25th November, 2014 by Jacob Robinson 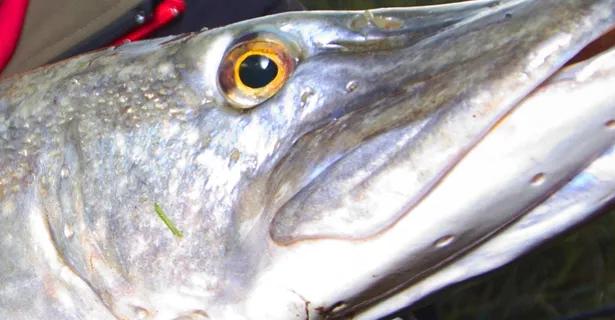 1. Prey When you’re fishing for species like roach or carp you create a swim with feed to draw them in and hold them. It isn’t the same with pike, instead you have to put the effort into finding where they’re most likely to be, and as a predator, that’s going to be near their food source – prey fish.

Where the prey fish are depends on the time of the year, or more importantly the temperature of the water. When the water’s warmer the prey fish will be spread out, usually in the shallower areas, meaning the pike could be anywhere. In autumn and winter, though, when the mercury drops, the roach and bream that pike eat will look for a more constant temperature in deeper water and so will shoal together in these places… and the pike will not be far away. 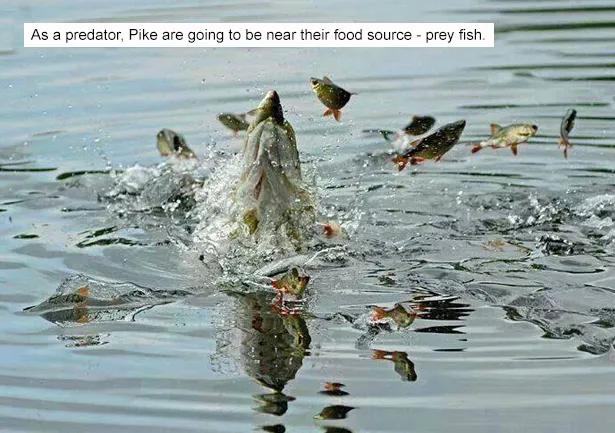 2. Tactics There are a number of tactics that you can employ to go after pike, with the main three being deadbait, livebait and lures.

• Deadbaiting is a static approach that works better in winter when the water’s cooler and the metabolism of a pike is slower, so they’re less likely to chase bait.

• Lure fishing is a much more active approach, which is best suited to the warmer months and into autumn when a pike will chase bait. It’s also better at finding the fish when they are more spread out, as it’s a tactic that covers lots of water.

• Livebait fishing is kind of a halfway house between the above. It presents a live, moving prey fish, but one that’s kept within a specific area, and because of this it can be a brilliant tactic when the pike are in the mood for it. 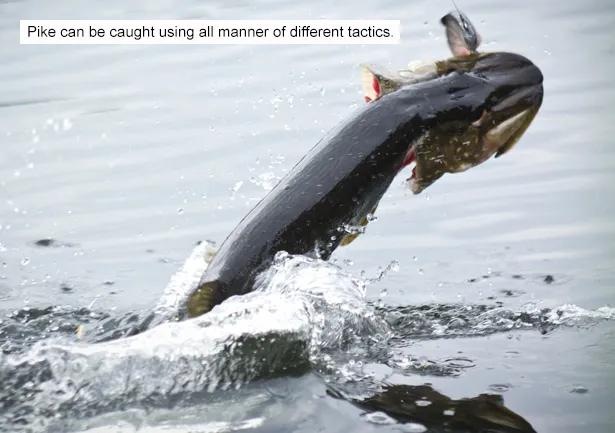 3. Rigs Float or leger, that’s the question here. For deadbaits, legering is often easier and more effective, or you can float leger, which works best when you want to present your bait over deep drop-offs and create an angle in the line. Floats work best for livebaits, as they allow the fish to move around and increase their chance of getting seen by a predator. 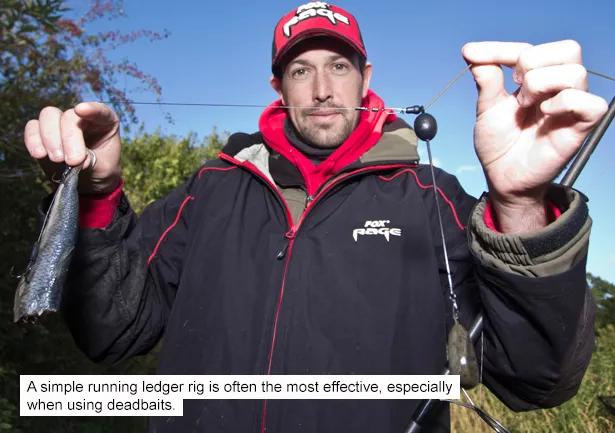 4. Location There are certain features in a water that are a great bet to find pike. Drop-offs are noted holding points for the predators. Here they can hold in the deeper water, waiting for prey fish to move in or out of the shallows before they strike.

Any kind of structure will hold pike, though, as they look for a darkened, camouflaged corner where they can bide their time before rushing out to engulf a fish that strays within striking range.

On canals and rivers, moored boats are also worth targeting, especially those that are lived in over winter, as just a slight increase in temperature in the water under the boat will bring in the little fish, and the pike will follow. 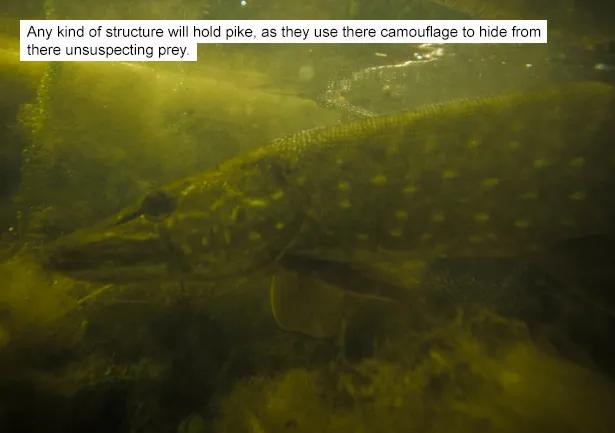 5.Tackle Fishing deadbaits requires strong rods, not because of the fish but because of the large baits and rigs you’ll be casting out. A 3lb test curve is about right for most situations. Match this with a reel that will hold lots of heavy line and one that’s preferably got a free-spool facility and you’ll have a solid setup.

Linewise you’re looking at a minimum of 15lb mono, or go much heavier with braid. Also, always remember to use a wire trace as pike will munch through mono, braid and fluoro if they get the chance. 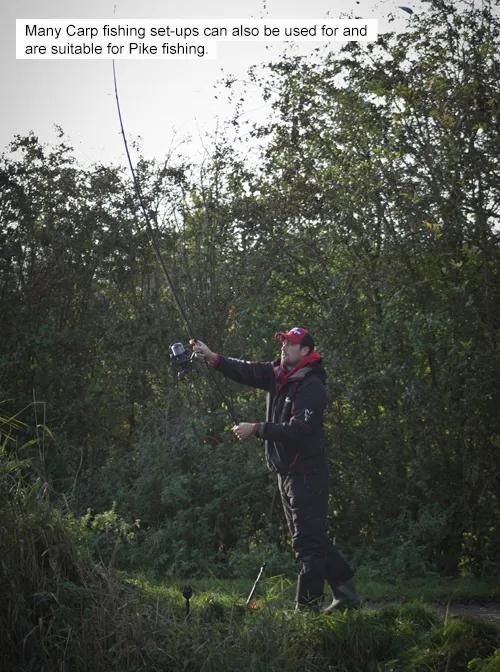 6.Edges There are a few things you can do to help you catch more pike. Prebaiting is a great way of drawing fish into an area before you fish it and also get them switched on to your bait. All you need to do is introduce a few handfuls of chopped-up fish into the area a few times a week and your chances of catching from that spot will increase.

Adding liquids and colours to your deadbaits can also give you an edge, with pike being both visual and scent-based hunter scavengers. 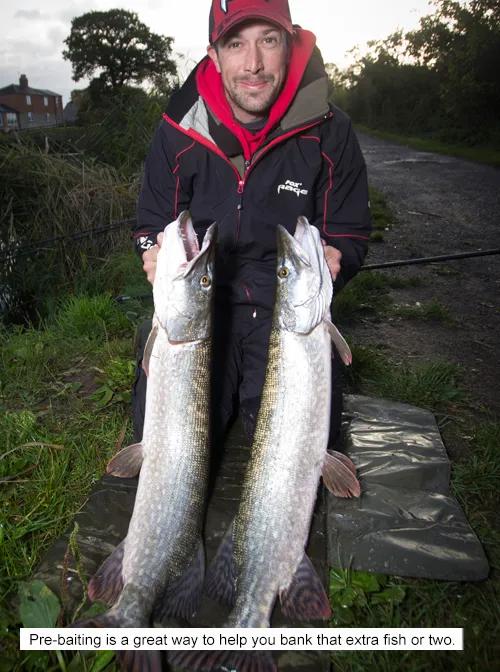 7.Hitting bites There tends to be lots of talk in pike fishing about letting bites develop, allowing the fish to turn a deadbait in its mouth so that when you strike you get a good hook-hold. Well, that can be very dangerous for the fish and a problem for anglers as it inevitably ends up with deep-hooked fish.

By far the best policy is to hit a bite as soon as you get an indication, as you only get a sign if a fish is messing with your bait. Even if you do miss a fish, this is far better than trying to remove trebles that have gone past a pike’s throat. 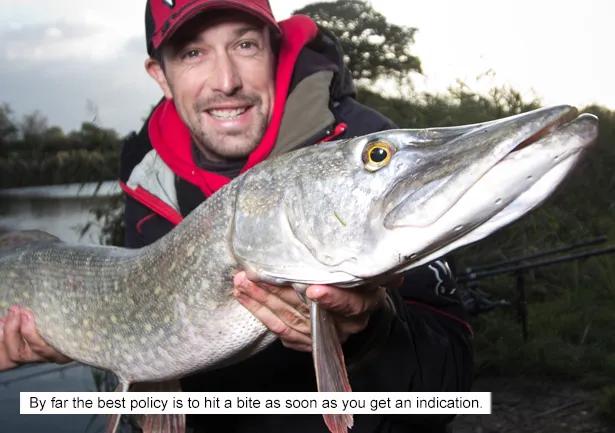 8.Handling Although they look rough and tough, pike are delicate creatures and need proper care and respect on the bank. Big unhooking mats are a must as powerful fish can thrash around and damage themselves on the bare bank. The best policy for the fish is minimal handling, so if you can unhook them in the water, do so. If you can’t, get them back in the water as soon as you can and if they are weak when you put them back, take your time holding them upright so that they can get oxygen across their gills and recuperate before swimming off strongly. 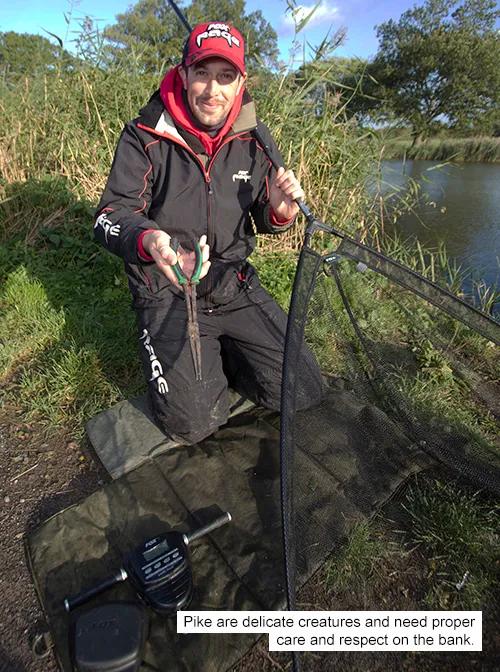 9.Unhooking Sharp teeth and fingers are not a good combination out on the bank, especially if you don’t like the sight of blood. Because of this, whenever you’re pike fishing you need to take the right unhooking equipment with you. The very least that will be is a pair of forceps that you can use to remove hooks rather than putting your fingers in harm’s way. Ideally, though, you would want long and short forceps and pliers to help with difficult hookings. 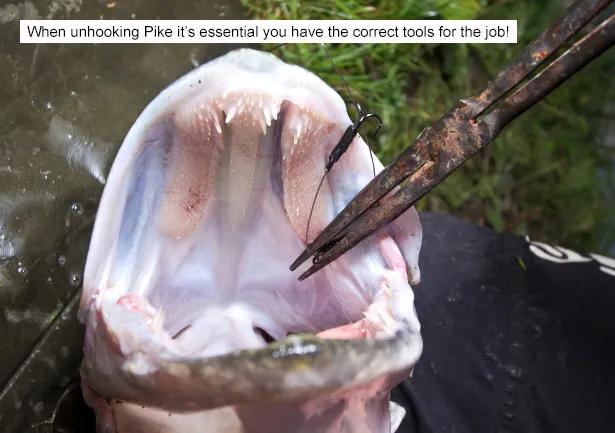 10.Bait Pike are as much scavengers as they are hunters, and especially so when they’re looking to conserve valuable energy. This is why deadbaiting can be so effective, and there is a range of baits to go at.

The choice is really between sea and natural baits, with naturals being best on waters that haven’t seen too much pressure and deads scoring where the pike have seen hooks in a lot of natural baits. Sea baits, such as mackerel, are also more readily available and tend to be more robust and cast better. 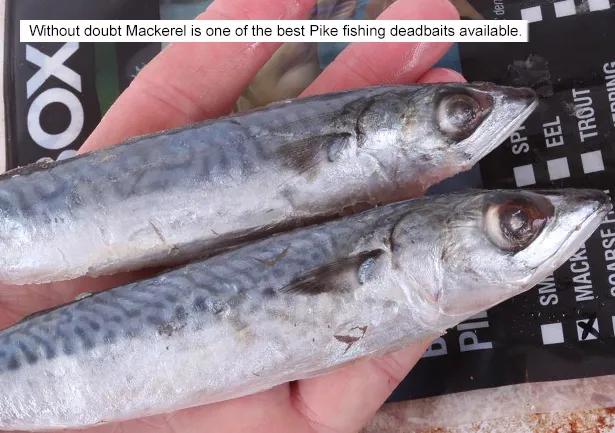