This entry was posted on 9th April, 2019 by Jacob Robinson 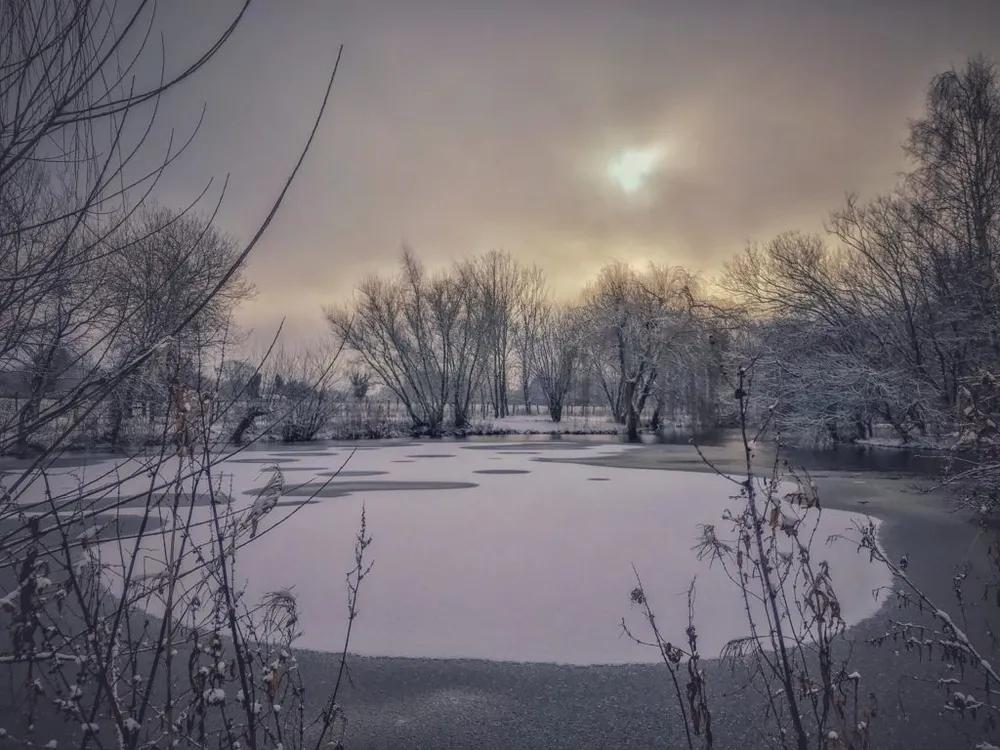 The prospect of fishing a new water and the excitement of catching your first fish from your chosen venue for me is still one of the most exciting and exhilarating experiences in angling.

At the beginning of this year I set my sights on a stunning little lake of just over an acre in size, which is known to be lightly stocked with some very hard fighting and tricky carp including some absolutely stunning character fish including some scaley bangers, along with the queen of the pool a very large and enigmatic ghost carp.

The lake itself is fringed by majestic willows whose branches cascade into the water and along with interment reed beds and accompanying scrub willow provides one hell of a Carpy haven.

Depth wise the lake Varies from between 9-3 feet, but owing to the fact that the fish have seen next to no angling pressure they are very tricky and so the element of stealth and stalking tactics are much the order of the day.

In early January, with frozen toes and frosted fingertips I set foot on the bank for the very first time with a view to capturing my first carp, however Mother Nature had other ideas and soon put pay to my best intentions freezing the lake solid within a few hours which was then followed by a flurry of heavy snow.

As beautiful as the lake looked in all of its winter glory it was no substitute for a hard fighting carp on my line and so on this occasion I had to admit defeat until Winter decided to release us from its icy clutches.

Despite no lines being wetted on this occasion, any time on the bank is never wasted and allowed me time to recce the water and plan my attack!

With it being a small intimate water, it was relatively easy to map out before the snow came down and I did this by way of a strategically placed Deeper.

I soon had the lake mapped and ensured that I had everything written down to ensure that on my return disturbance was kept to a minimum.

Although I managed to find a few spots which I deemed prime feeding spots in the margins, with any new water I believe watercraft is key and ultimately I was prepared to let the carp dictate to me where I fished.

It was then a few weeks before a window in the weather sent temperatures soaring and the nights were kept frost free.

With this in mind I took my chance and made my way back down to the lake oncemore.

Arriving at first light or as early as you can at any lake is a priority and is prime time for fish spotting so get there early!

Being gentle underfoot I soon found a group of 3 fish sat tight to a group of reeds and then two larger fish underneath the canopy of a scrub willow at the other end of the lake. The game was on! 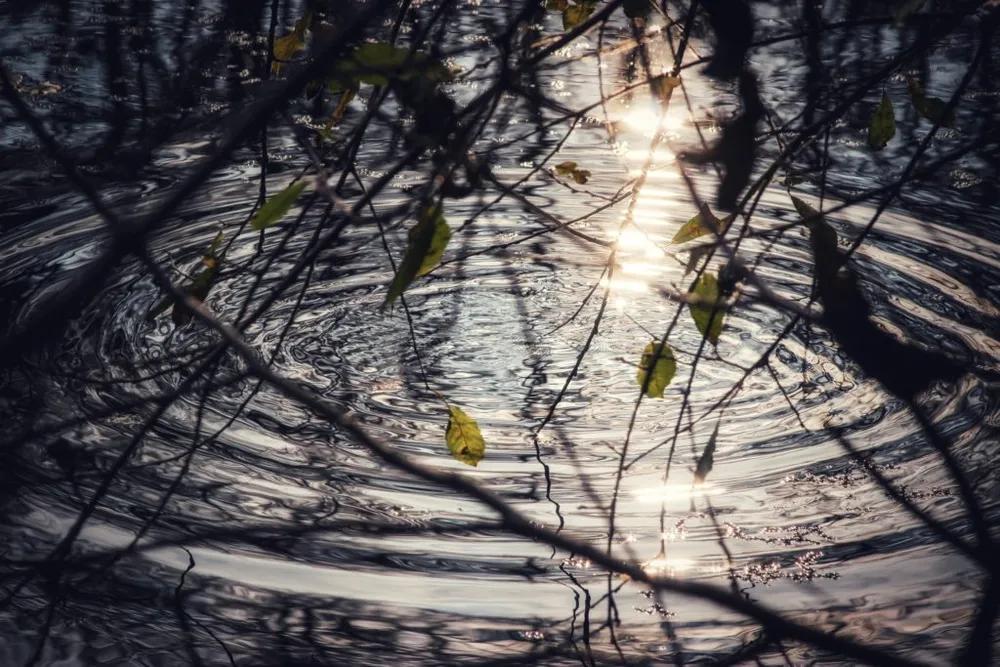 As mentioned earlier with it being a relatively small water I was prepared to get on the move and stay mobile as crashing about with heavy tackle and a static approach was most definitely not the order of the day.

With the fish monopolising the margins I hurriedly set up two running rigs with light leads fished in conjunction with my chosen hook baits and small PVA bags filled with a gourmet of high attract pellets.

My rigs were then gently lowered under the canopy of a tree literally feet from the bank and my lines slackened right off.

Traps set I sat back in wait.

With high pressures, warm sunny days and colder nights fish respond quickly to changes in temperature and in early spring the fish are likely to have only relatively short feeding spells and thus presenting you with small windows of opportunity, again a good reason for getting there early!

As if by clockwork and as the warming spring sunshine kissed my marginal spots my right hand Delkim let out two intermittent bleeps before melting off as a fish took flight towards the centre of the pool!

A short tussle then ensued as a dogged fight commenced but just as I was winning the fish attempted to find sanctuary amongst the branches of a nearby fallen tree and so in order for me to stop it reaching its lair I clamped down on the spool resulting in the hook pulling from its mouth!

I was a little gutted to say the least as I know that the fish in here do not give themselves up easily and my heart sank knowing that this was an opportunity missed.

Owing to the fight at close quarters, despite me trying to keep the disturbance to a minimum I feared that for the meanwhile my chances in this swim had been spent and so chose to wind in both rods, apply a little bit of bait and then rest the swim hoping that in the absence of any lines the fish would soon move back in and be allowed to feed freely.

A nice cup of tea was the order of the day and as the temperatures climbed higher, I sat back to reflect on my loss and plan my next approach.

A good pair of polarised glasses are crucial for fish spotting and at this time of year they certainly come into their own when creeping around the undergrowth in search of fish.

With a bag of mixers and half a loaf of bread I set out in search of what possibly could be my first fish of the season taken off the top.

The weather looked spot on and despite the water temperatures still being on the low side fish were definitely on the move.

As I walked into the top half of the lake which is considerably shallower with depths between 3-4 feet, nestled up a bank of dead reeds I spotted a group of fish basking in the sunshine and so quietly flicked a few mixers out on the breeze and watched as they drifted closer and closer to gauge there level of interest. Needless to say they showed no interest what so ever.

Frustratedly I watched as the fish now 4-5 in number just moved in and out of the bank of reeds but not once did they rise to the baits.

Suddenly materialising from the depths I caught a glimpse of something a much bigger and certainly a little special!

It was the big ghostie! A beautiful fish and one which I know to have been caught over the 25lb mark!

I watched in awe as she glided up and down the lake and thought best how I could intercept her.

Throughout the later part of the afternoon she continued to tease and evade me despite my best efforts, zigs, floaters and even “dapping” old school with a piece of floating crust off the edge of the reeds could not temp her and as the cold breezes of early evening arrived to cool the upper layers she eventually disappeared from view, sinking into the depths like a big white submarine..... 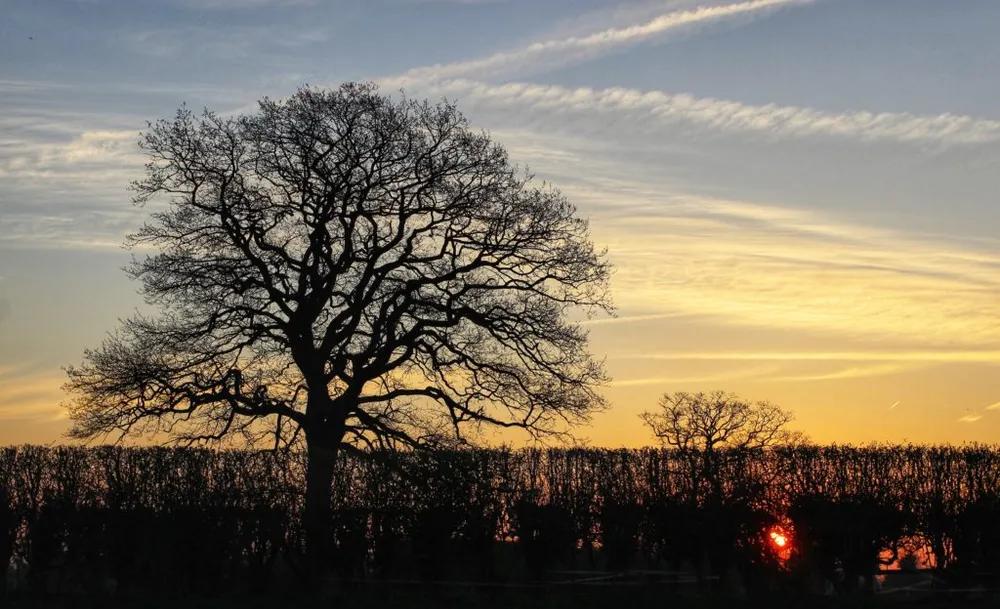 With the arrival of darkness imminent I returned to base camp for the night and having now rested my spots carefully lowered once more two small PVA bags into the far margins.

Needless to say my alarms fell silent during the hours of darkness.

The following morning I awoke to a very heavy mist having settled over the lake , reducing visibility dramatically.

Suddenly somewhere not too far away I heard a fish crash and then again! Things certainly sounded promising.

As the early morning sun came up over the trees it gently burnt away the mist revealing a mirrored surface without a single ripple.

Once more the suns rays shone down, its warmth seeming to caress the waters surface when suddenly my left hand bobbin pulled up tight and was suddenly away!

Scrambling out of my bag I picked up the rod and as the rod hooped round I found myself attached to a hard fighting mirror.

By this time my heart was beating faster and faster, anxious and determined that I was not going to lose this one. Thankfully after a short but determined battle she was resting safely in the bottom of my net, result!

As I peeled back the mesh , there lay my prize, a stunning low double, scaley mirror, perfection in miniature and not a mark on her. 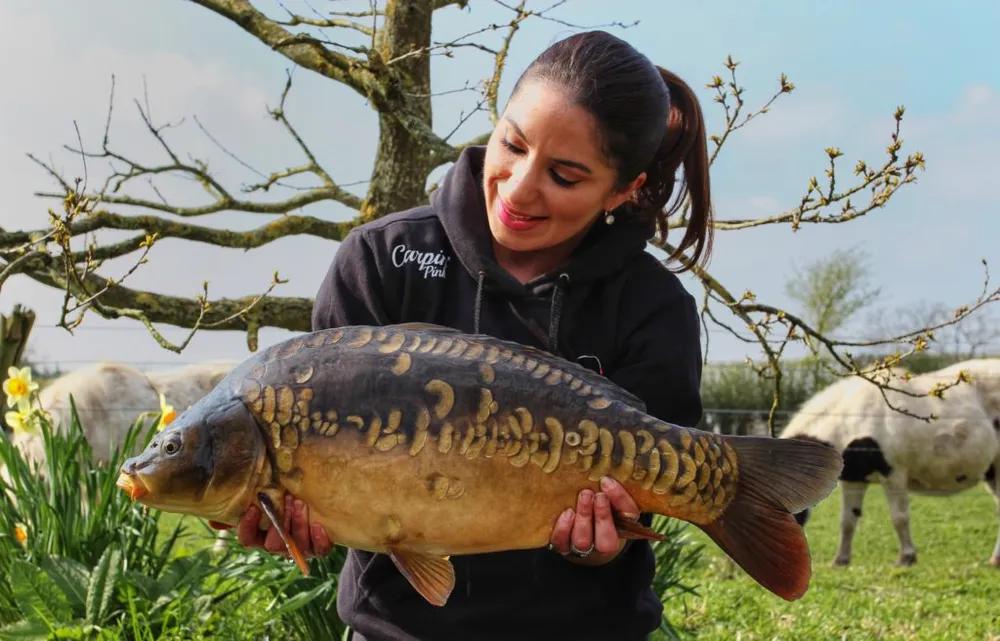 As I slipped her back and camera shots done I was more than happy to be off the mark with this one and what a beautiful fish to do it with! The loss of my first fish soon became a distant memory!

With the chance of another bite looking promising in the early morning sunshine I guickly sorted my rigs and got back on my spot.

I didn’t have to wait long and within an hour my left hand bobbin dropped right back hitting the deck.

This time the fish feeling the hook, bolted right along the far margin. Side strain was applied which in turn caused the fish to change direction and away from a marginal snag.

Steady pressure was applied and I gently coaxed fish number two over the net!! 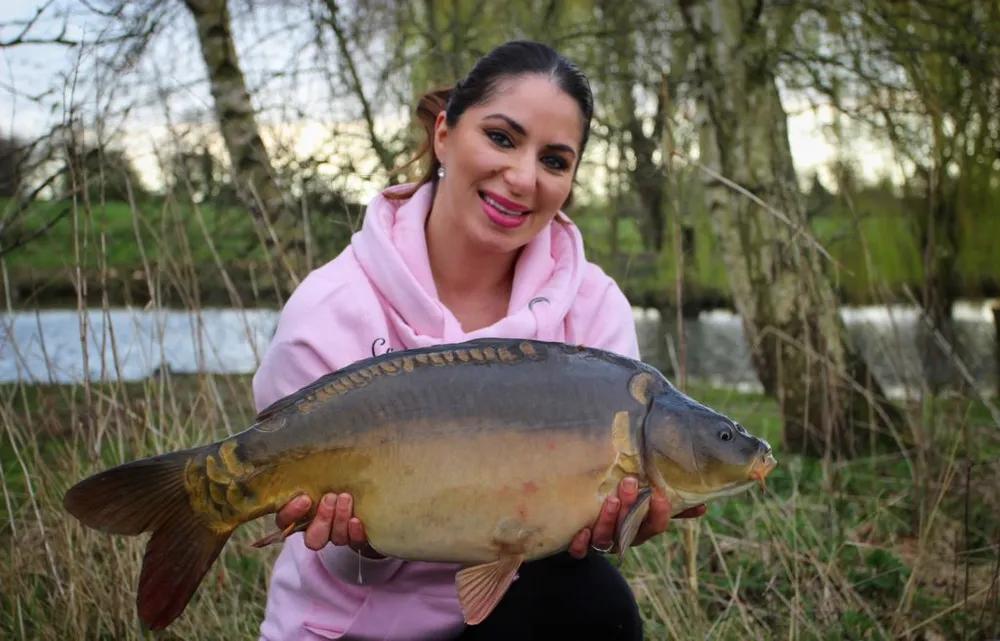 This time it was a plump, sparsely scales mirror, a right little bruiser with not a mark on it!

I was over the moon once more as I lifted him up for a photo , two fish in quick succession was more than I could have asked for!

Now getting up to late morning and midday a cool, easterly wind ravaged the lake and ultimately put pay to anymore fish action, and I suspect that if it was not for this another fish could have been in the bag.

I pulled off at just gone midday happy with two absolute beauties!

Yes the big ghostie managed to evade me on this occasion but I was glad that I had by two fish under my belt, I was happy in the fact that I had fished well, making the most of the opportunist feeding window and took my chances when I did.

Remaining mobile, getting on the bank early morning and taking the time to find the fish definitely brought me fish that I’m sure I would not have caught glued to a bed chair and hidden away in the sanctuary of a bivvy.

Spring had finally sprung in the shape of two absolute bangers and there’s always next time to chase that big ghostie so stay tuned! 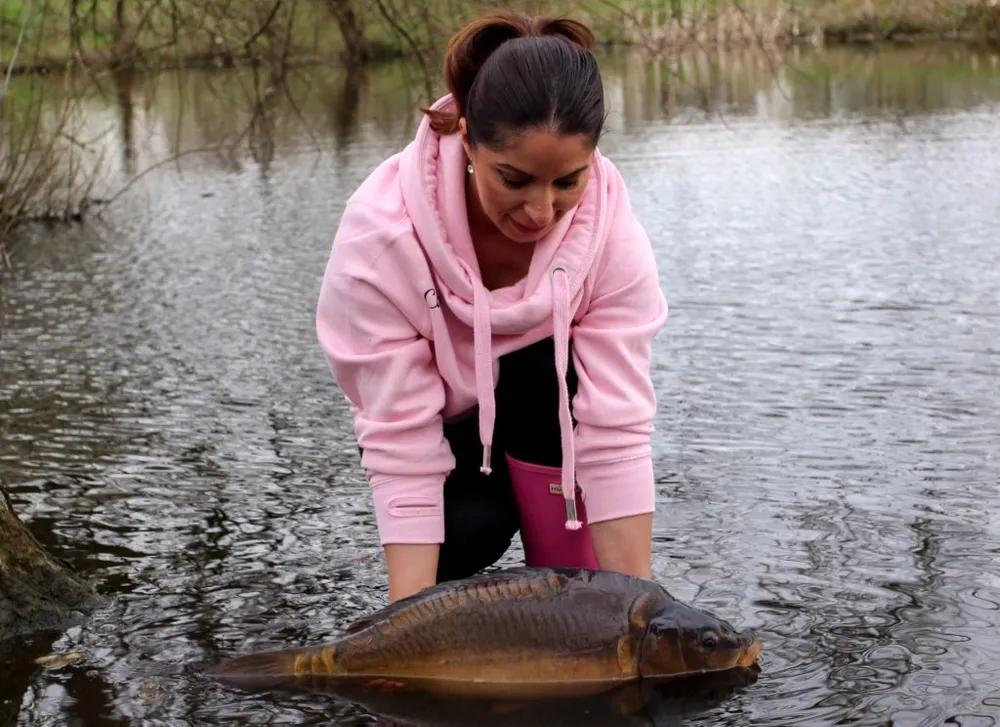