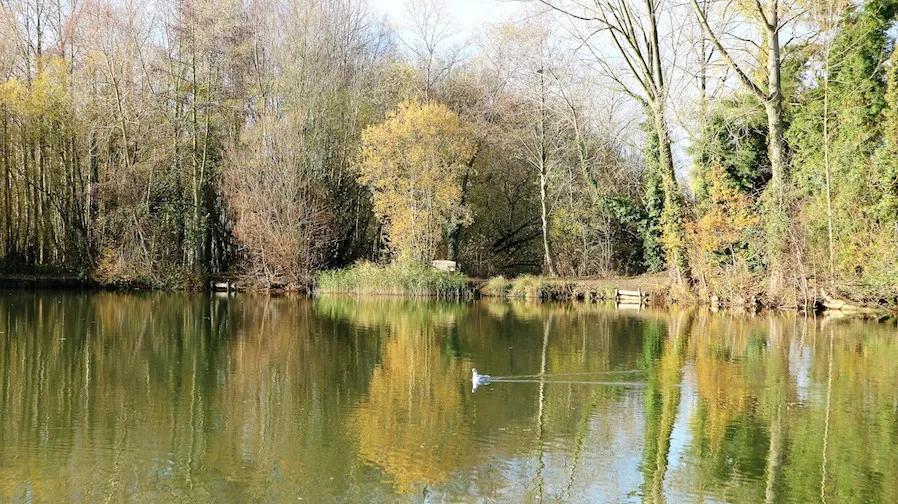 I normally like to fish the Upper River Witham at this time of the year, but my local stretches badly needed a proper flush through to clear some of the weed and put some colour in the water. So, while waiting for the rains to come, I decided to continue exploring the Match Lake at Woodland Waters after enjoying such a fish packed October on the venue. 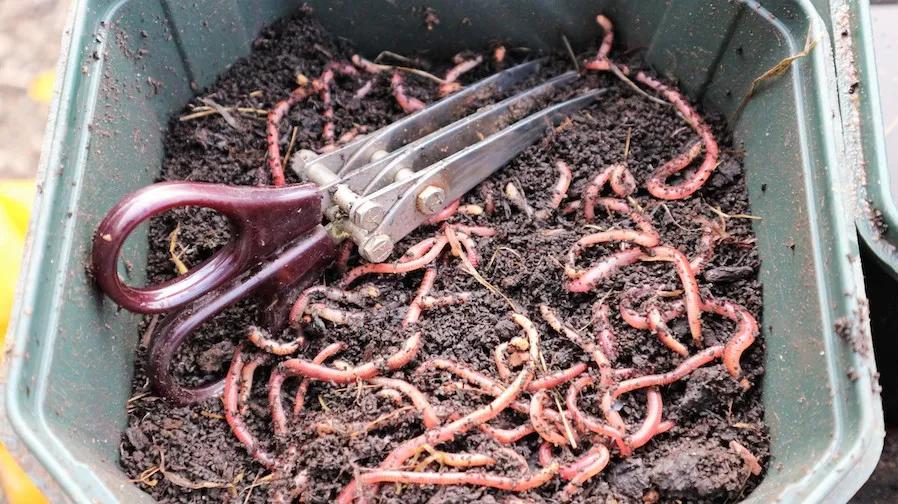 It was a lot colder early November and I had a feeling the fishing would be a lot harder, so I set out well equipped with plenty of worms, which normally help to activate lethargic cold-water fish. There was a bitterly cold Easterly wind, so I picked a sheltered area where the water is deep close in. I planned to fish the long pole at full depth, nailing baits like maggots, casters and segments of worm hard on the bottom. I set up a 1g pole float with an olivette as bulk and three number 11 shot spread out below. My trace line was quite light at 0.10mm with a size 18 medium wire hook, relying on a forgiving number 4 pole elastic through the top two sections of my pole.

The plan was to feed dark balls of groundbait, laced with plenty of chopped worms and casters, along with a smattering of micro pellets. The latter I thought might help if I needed to switch to a pellet on the hook, if small fish proved to be a problem. 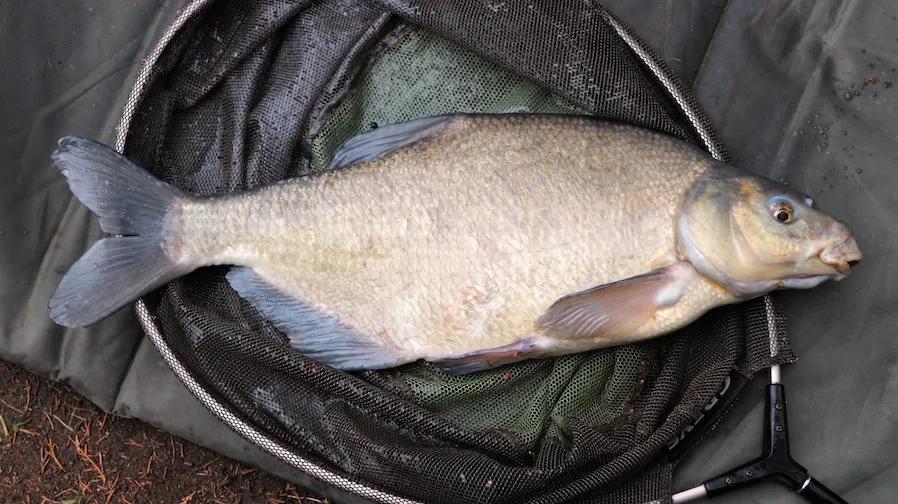 As it turned out, I needn’t have worried about small fish because it took ages to get a bite! Suddenly the venue had changed, nobody seemed to be catching and boy, was it cold. I kept flicking a few casters out with a catapult to try and encourage some interest, but for the first hour and a half all I got was a couple of what I call ghost bites, because I didn’t connect with anything.

I tried adjusting my rig, so my hook bait was an extra couple of inches over-depth and kept experimenting with maggots, casters and pieces of worm. Finally, a small segment of worm resulted in a proper bite and my pole elastic stretched out a long way as a ponderous fish ploughed about in the depths. It took a while to get the fish up on such light gear and when I did eventually get it in my landing net, it was a decent sized bream. 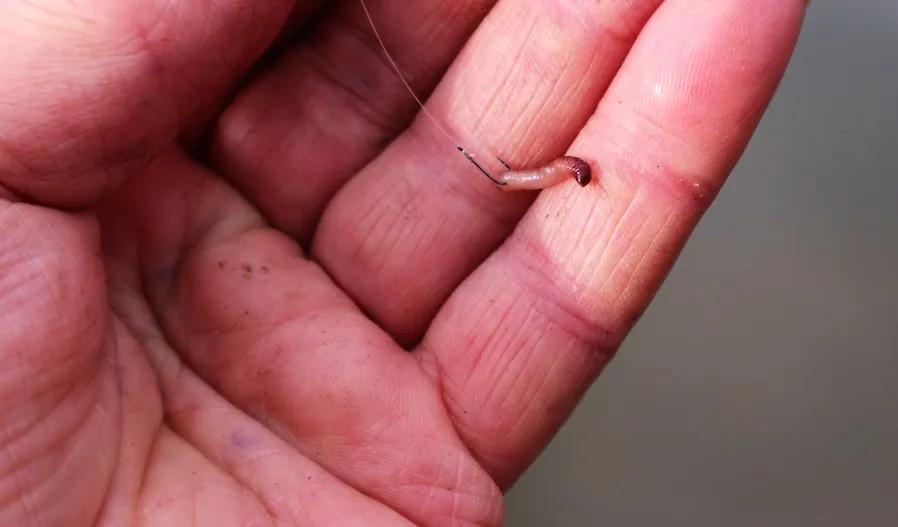 Nothing happened after that, so I fed another hard ball of groundbait, again well packed with chopped worms. This woke the swim up with a rash of small perch, followed by odd small roach and skimmers before things went quiet again. I kept a few casters going in but couldn’t buy a bite on this bait, eventually deciding to persevere with small bits of worm on the hook.

After what seemed like ages, I was suddenly connected to another decent bream. After landing the fish I had a good look around the lake. Mostly carp anglers were on the water and nothing much seemed to be happening. One double figure carp had come out further down my bank and another angler I had been chatting to missed a couple of runs in the next swim along. 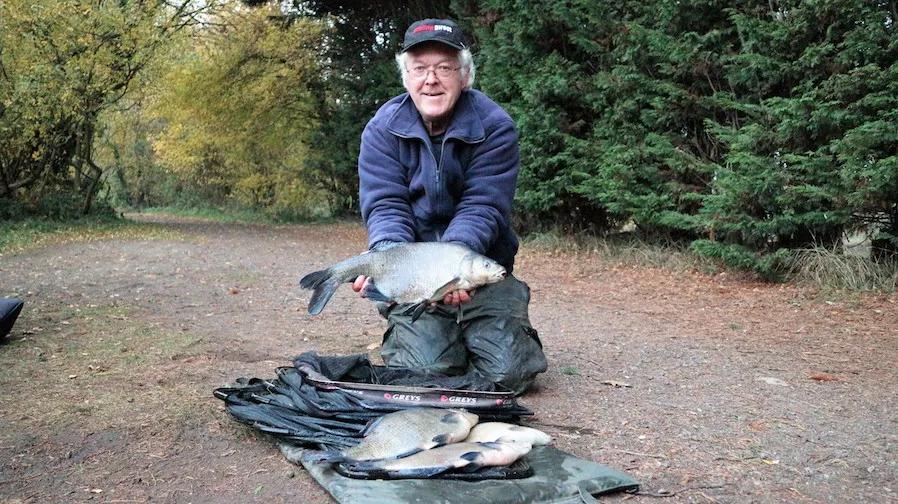 I had a second rig made up to try fishing well off the bottom, a tactic that had been catching me a lot of big roach back in October, but a couple of goes with this only resulted in phantom ghost bites

again. For the rest of the session I plugged away with my olivette rig and worms, catching the odd smaller fish and then late on adding another brace of decent sized bream.

As I was packing up, I asked the carp angler next door if he would mind taking a few photos of my best fish and he duly obliged. Only trouble was, just as he was taking this shot, he had a screaming run on one of his rods! He missed the fish thanks to me. Sorry mate! 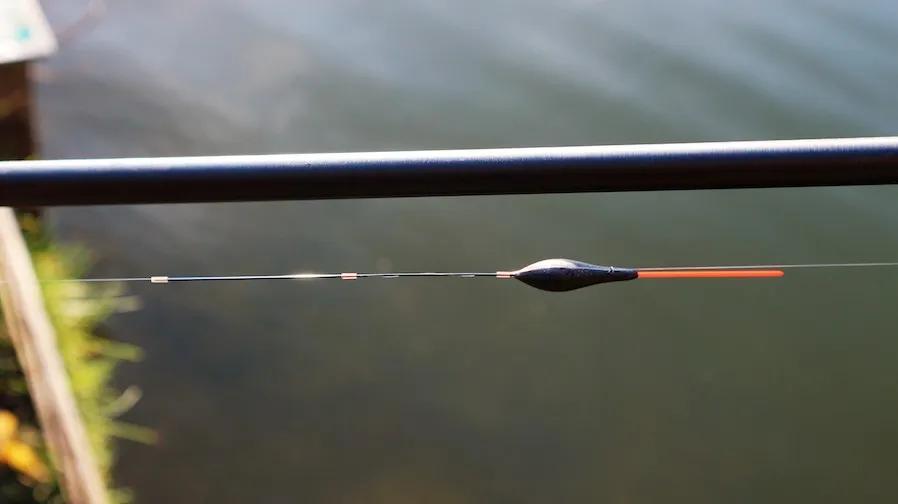 A week later the weather had warmed up considerably and back on the same lake it was suddenly very busy again. As it was a Sunday and the holiday park gets lots of walkers, I tucked myself away in a corner, well out of the way. When I plumbed up, I discovered I had less than half the depth of the previous swim I had fished further down the same bank several days before. I set up a much lighter rig using one of the new Advanta Silver Fish Finesse Pole Floats, with a slightly spread bulk of number 10 Stotz Weights, finished off with three well spread number 12s below. 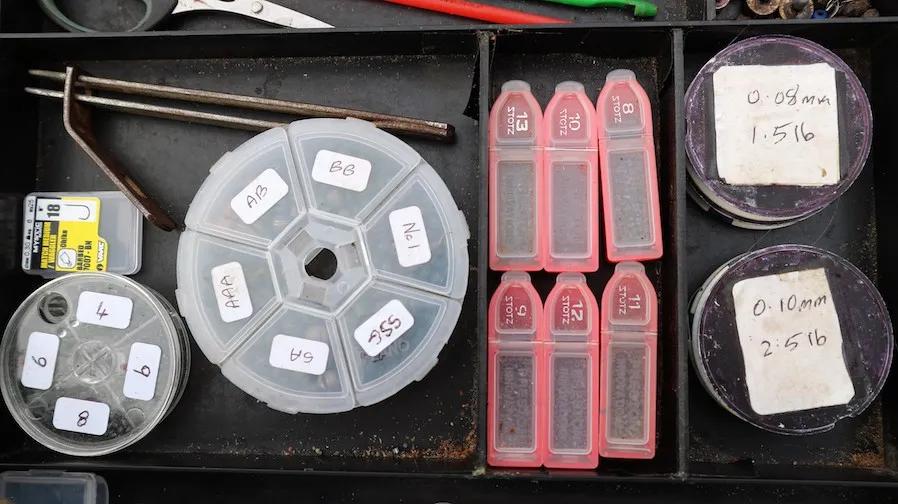 I use Advanta X5 Rig Line on all my pole rigs now. I tested out this Japanese low diameter gear for several months before it was stocked in Angling Direct stores and can honestly say it’s brilliant. I still have my first sample spools, which I labelled up myself while field testing. Now the line is in stock, it looks a lot better than the samples in my seat box!

On this occasion my pole rig had the 0.10mm gauge as main line and lighter 0.08mm forming a long hook length, tied off to a fine wire barbless size 20 hook. 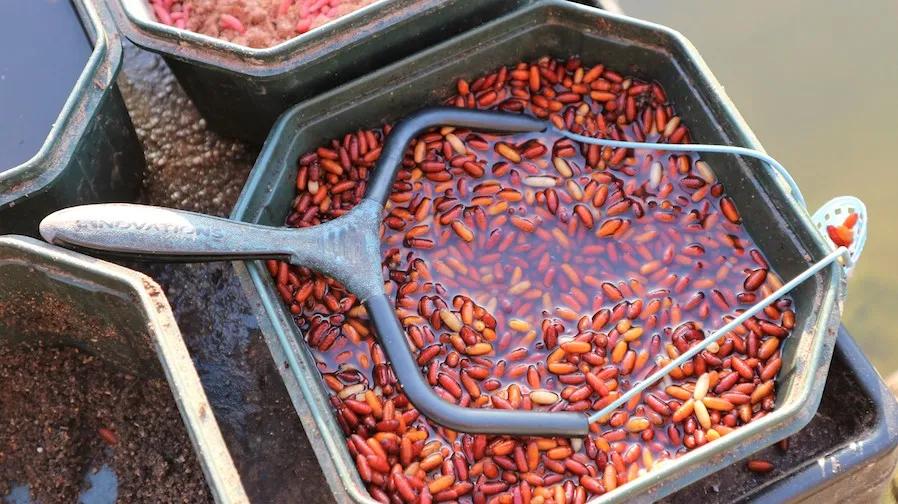 Once again, I decided to kick off with balls of groundbait well-laced with chopped worms and casters, but no pellets this time. Over the top I planned to loose feed a few casters regularly, having a backup shallow set strung rig ready, just in case fish moved up in the water as I built the swim up.

It was a slow start like my previous trip to the lake, with nothing to show for my efforts during the first hour, but then I started to get those strange ghost bites again. The float tip slowly went under, but nothing resulted. 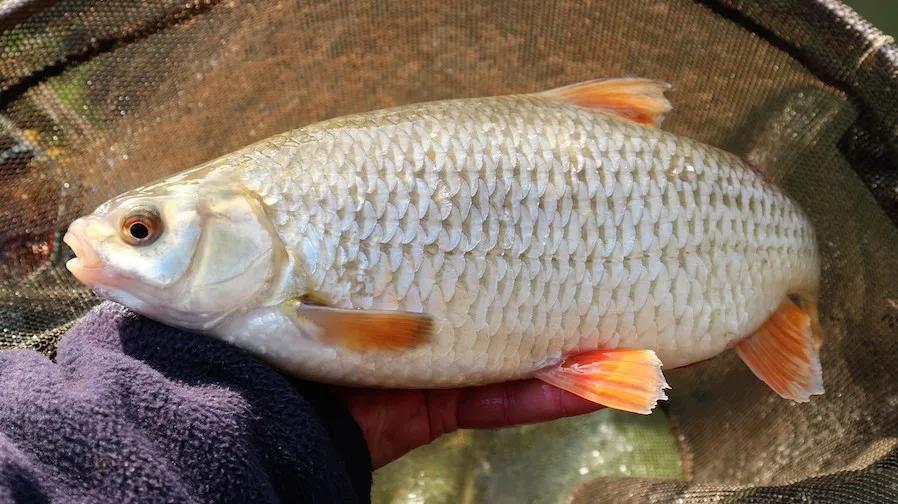 Like before, I adjusted my full depth rig so it was set slightly more over-depth and this made a big difference. I’ve always suspected that a lot of missed bites are caused by wily bigger fish that have learnt how to avoid getting hooked, but having said that, they can be fooled with hook baits laid hard on the bottom. I think this is because they can’t see the line when it doesn’t come up directly vertical from the hook and bait. This cracking roach resulted, to prove the point! 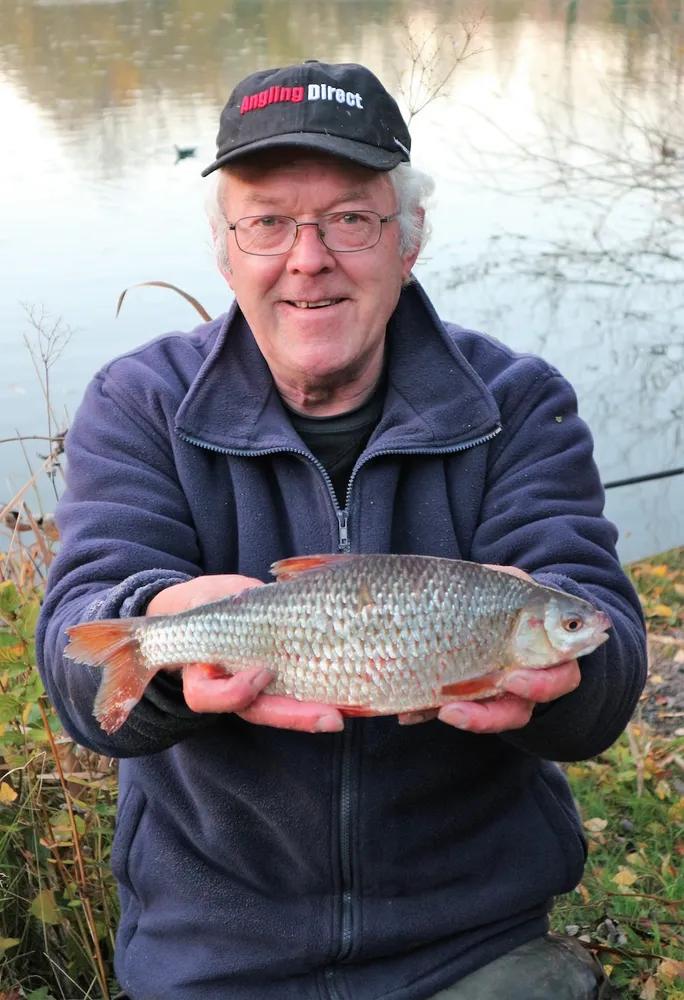 The session got better and better once I sorted my full depth rig out. I did catch a few fish when I had a look with a reserve shallow rig, but they were not as big as the ones feeding on the bottom. I caught several big red fins around the one-pound mark and quite a few between 8 and 10 ounces, with a single caster turning out to be the best bait on this occasion.

A few hand sized skimmers came my way as the session progressed, but no proper bream this time, probably due to the shallower depth. Then it happened. A tentative bite turned into a serious elastic stretcher as a powerful fish steamed off to my right, trying to get into some overhanging bushes. I just managed to turn it with my light gear and then I saw it flash just beneath the surface. This looked like a very big roach and when I got it in my landing net, it certainly was! A bit battle scarred, but Pete the bailiff took this photograph and reckoned it was over 2 lbs. The biggest red fin he has seen come out of this lake. 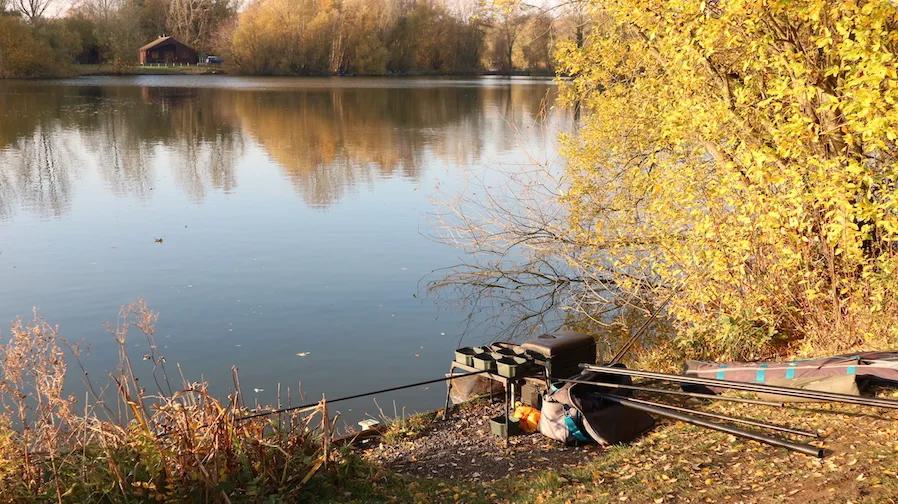 Entering the final week of the month, there was still no substantial rain to wake up the rivers, so I went back yet again to Woodies to have another crack at the place. This time I tried the other side of the lake because floating leaves were a problem where I fished before. The water was a lot deeper here, so I set up my bream pole rig and a lighter roach rig for closer in. 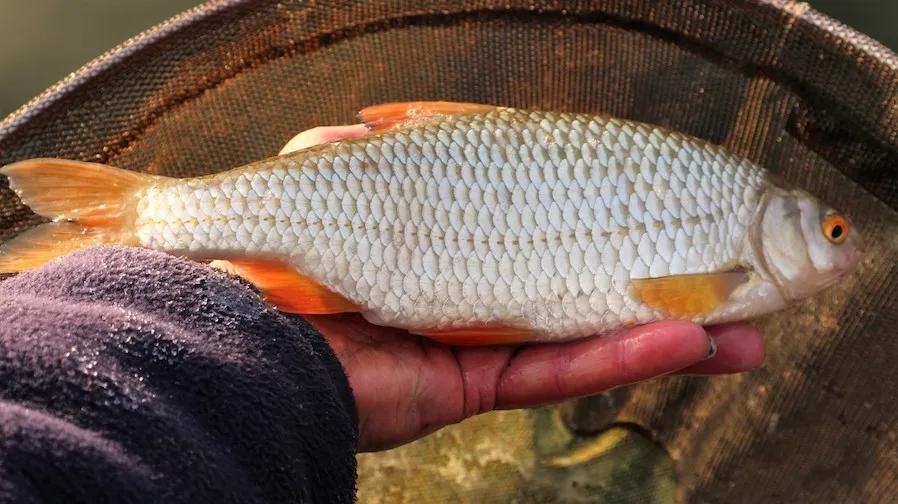 It had turned a lot colder again and this made it hard going. Those strange ghost bites came back to haunt me on my deep rig, where I did eventually hook something big, but it came off. After that nothing happened out there so I moved in over my closer feed line, where it was several feet shallower.

My roach rig was again set up with 0.08mm Advanta Rig Line and a fine wire 20 hook, giving me confidence that if anything was going to bring a positive bite, this would. It took a while, but eventually I started to catch a few roach, perch and skimmers, then a decent roach.

The session had started with bright sunshine, but quickly the weather turned into one of those cold, damp and misty November days and the bites tailed off.

As winter draws in, its always worth hanging on for the last few minutes of daylight, as that’s when bigger fish often switch onto the feed. After a long blank spell, my closer feed line started to fizz with tiny bubbles on the surface. Sure enough, my float slid away and a big roach resulted, followed a few minutes later by a similar sized perch. A nice finish to a tricky but interesting month.

With rain at last moving in as I finish writing this, I’m dusting off my river gear and can’t wait to see what December brings. 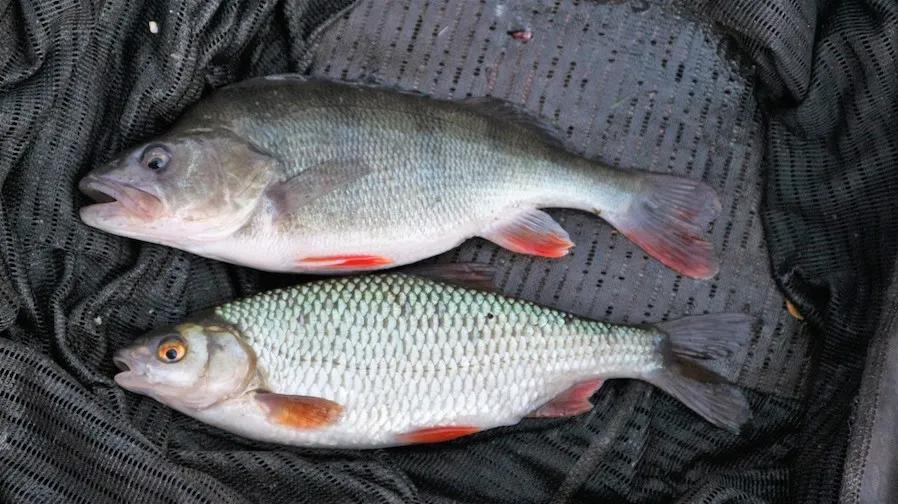