This entry was posted on 21st May, 2015 by Jacob Robinson 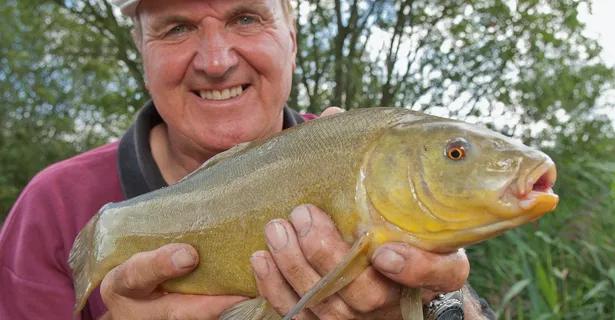 Anchors aweigh! You won’t catch many tench with a waggler unless you anchor your hook bait on the bottom. Bob Nudd tells you how.

I love fishing for tench with waggler tackle. There’s something very special about watching a float, and it’s even better when its orange glides beneath the surface to be greeted by a hooped rod and a few minutes later, by a gleaming ‘tinca’ in the landing net.

For me, catching tench on the float is all about early summer’s mornings, pinprick bubbles as a fish or two root around the bottom, and the ‘never-give-up’ fight that only a hooked tench can give.

But catching tench with a waggler requires an approach that’s very different from that required for most other species. 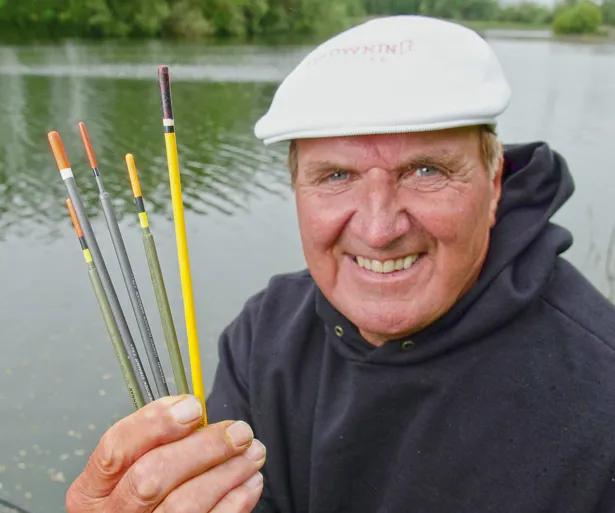 For a start, they nearly always feed hard on the bottom. This means there’s no place for delicately-shotted, on-the-drop rigs that I’d use for roach fishing. For tench, it’s much more a case of anchoring a hook bait to the bed of the lake.

Older anglers might be aware of a technique known as the lift method, where a large shot is fixed on the line a few inches from the hook and a short, stumpy float is attached to the line with a piece of silicone rubber close to its base. Bites are usually signalled by the float tilting, lifting, perhaps even lying flat on the surface, as a tench upends to take the bait before righting itself, thereby lifting the weight on the bottom.

My way with tench is not quite so traditional. I can’t quite bring myself to fix an SSG shot three or four inches from my hook. I’m a match angler, finesse is everything to me, and an SSG near the hook doesn’t show any finesse in my book!

Instead, I adopt a ‘half-way-house’ approach. When I’m fishing for tench, I’ll always make sure my hook bait is anchored to the bottom, but instead of using a large, cumbersome weight, I’ll use a swivel with small shot if required.

The All-Important Swivel Let me explain. I’m a big believer in attaching my main line to my hook length with a small swivel when waggler fishing. Not only does this help prevent line-spin on the retrieve, it also acts as the bottom shot on my rig. 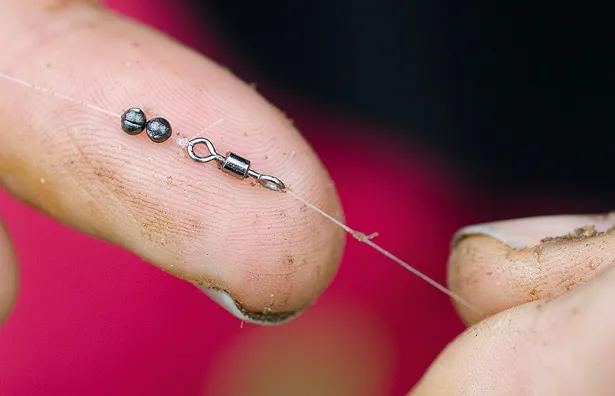 By plumbing the depth carefully and making sure this swivel is on the bottom, I can usually ensure the rig stays put without drifting. There are times, though, when a small 12 swivel isn’t heavy enough to anchor the rig. When it’s windy, lakes often ‘tow’. The water in them moves according to the wind. Sometimes this movement will be with the wind while sometimes it will be against the direction of the wind. The tow can vary on different parts of the lake and it will also vary according to the depth of the water and the strength of the wind.

Whatever the tow is doing, they key thing to achieve is to ensure the rig stays put. Tench won’t take a moving bait. Well, most of them won’t anyway, so you must increase your chances of keeping your bait anchored to the deck.

It’s easy to achieve. After plumbing the depth, move the float up the line until you know the swivel is on the bottom. Then, if the swivel is being pulled along in the tow, add a No8 shot just above it and try again. Keep adding No8s until the float sits perfectly and stays put. 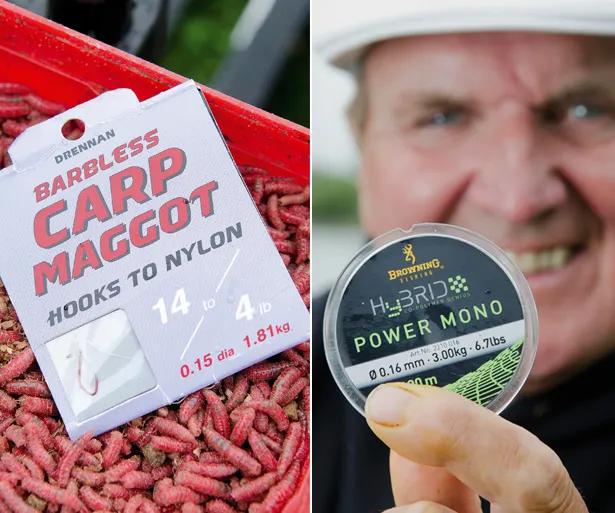 Don’t plumb the depth in the usual way, with a heavy plummet attached to the hook. Instead of doing that, I squeeze an SSG shot on to the swivel joining main line to hook length and plumb using this. Moving the float up or down the line will eventually see it just visible at the surface, which means the swivel is just on the bottom – you can move the float a couple of inches up the line to make double certain.

A couple of final point to remember about waggler fishing for tench. First, your float needs to be fairly buoyant, so that it doesn’t get dragged under by any surface movement in the water, and second, you don’t need to fish especially fine. I use 0.16mm main line on the reel, which has a breaking strain of 6.7lb, and a hook length of 0.15mm diameter (breaking strain of 4lb). Hook is a size 14, in my favourite red colour. 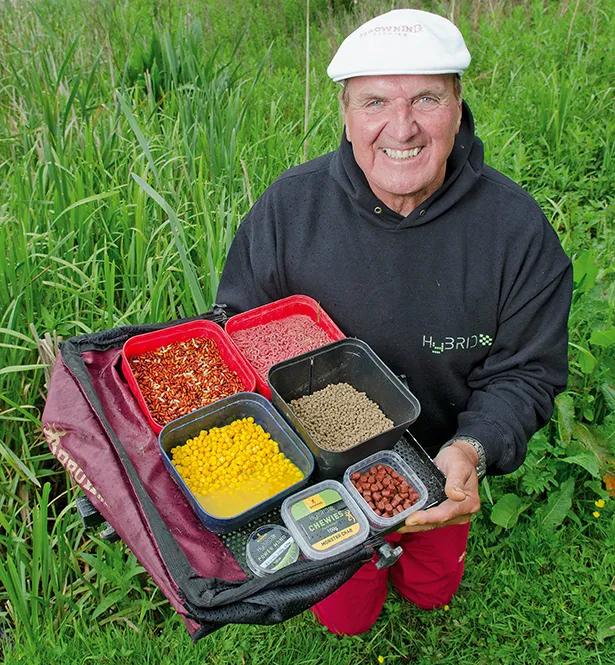 Bait For Tench Tench are highly inquisitive and I always make sure I make a bit of noise when baiting up for them. On weedy waters, I have been known to rake a swim, to create plenty of commotion and, to remove weed and stir up the bottom. All this certainly stirs up their curiosity and this noise effect also has a place in my baiting campaigns.

Create a bit of noise on and in the water, and tench are sure to investigate. If the fish then find something that stirs up their taste buds, so much the better.

Several balls of sweet and sticky groundbait will often be my opening gambit, and I always make sure it contains plenty of particles, in particular sweetcorn, casters and 4mm pellets. Tench love casters by the way – never go tenching without them! 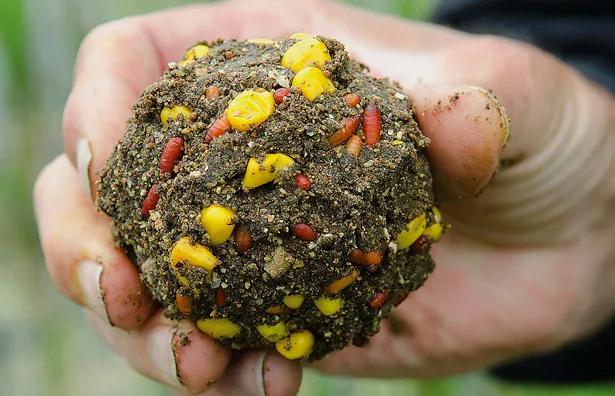 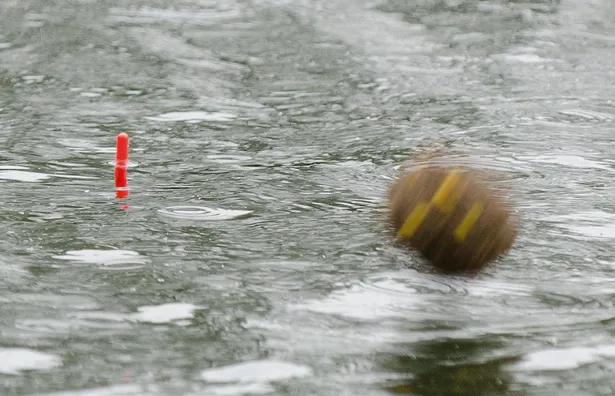 As a general rule, I’ll throw in four balls of groundbait at the start of the session, making sure they’re squeezed hard so they get down the bottom quickly.

After that, I like to loose feed over the top. Ideally, this will be casters, but if there are lots of small fish like roach in the lake, most of these will be eaten on the way down. In this situation, loose fed sweetcorn would be a better option.

As far as hook baits are concerned, keep an open mind when tench fishing. I make sure I have plenty of options, but if I was pushed to make a choice, here are my top five favourites… 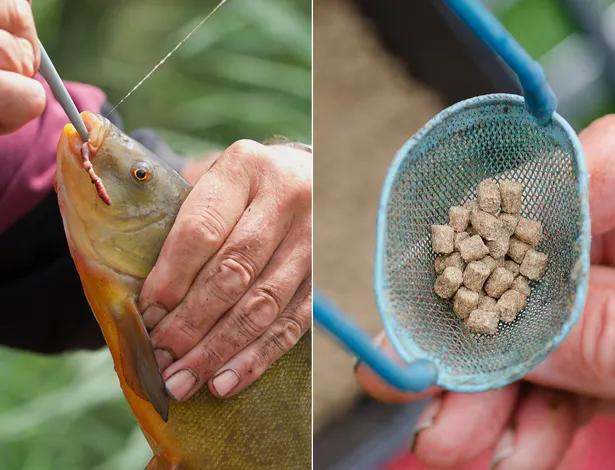 1.) Tail of a lobworm. This is a fantastic bait and in my experience, always tempts the biggest fish in a shoal of tench.

2.) Two or three red maggots. Tench love these, but so do other species and if your lakes contains lots of small fish, you might need to go for something a bit bigger. Great for catching good numbers of medium-sized tench.

3.) Sweetcorn. This is another proven winner for tench and works well on commercial fisheries. Being a highly visual bait, it works well in coloured water.

4.) Double caster. I don’t know what it is about casters, but I can’t stress enough how much tench love them. Double caster can work when all other baits fail.

5.) Red worm. Perhaps a surprising choice, but if you can get hold of some, red worms are an excellent tench bait. So chat up you’re your local friendly horse-riding school and raid their manure heap!

TOP TIP Where To Fish One of the great things about float fishing for tench is that you don’t need to cast vary far out. These fish are great margin-patrollers and normally a cast of up to three rod lengths is all you need. Plumb carefully and try to fish just at the bottom of any nearside slopes.

Shop For All Tench Tackle 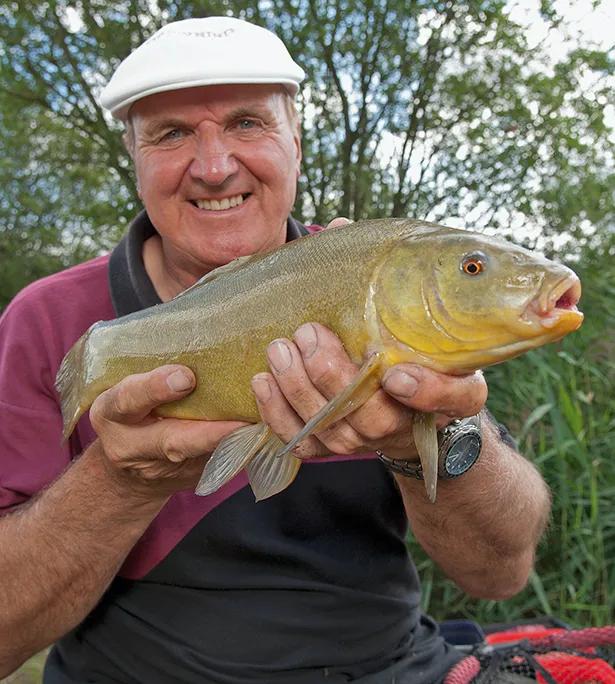