Martin Greene, of Daiwa & Old Ghost, gives us a lesson in the art of pinging – a popular method that wins countless matches throughout the year.

Ping-ing (pinging) - To catapult pellets regularly while fishing the pole

The word or term ‘pinging’ is something that you will hear regularly when walking around any commercial fishery. Pinging is a tactic that has really come to the fore in recent years, as the use of hard pellets has become more and more popular. It can be a devastating approach but, more importantly, it is a way to catch a few fish no matter where you draw, as it is what can be considered a safe method – an approach that can carefully build up a swim over the course of five hours.

The Approach Pinging is the term used by anglers for feeding small amounts of pellets regularly by catapult. Because the catapult barely needs to be stretched, the pellets are literally ‘pinged’ around the float. Developed at venues such as White Acres, pinging has become a widely used method. It is usually achieved by fishing at pole lengths of 13 metres or more and gives the angler the option to catch both on the bottom and shallow.

Daiwa and Old Ghost-backed Martin Greene is a fine exponent of the art; in fact, the day before this feature he came second in a match using this very tactic. We decided to get on the bank with him to see if we could get to the bottom of this great method. The Distance “Ideally you want to be fishing at least 13 metres. This seems to be a comfortable distance to fish and feed accurately. Fish are also comfortable feeding this far from the bank and I can always be confident of snaring fish from the start of the match.

“More importantly, I am looking to find a perfectly flat bottom and preferably somewhere with a hard bottom. Here at Alders Farm, the lakes are spring fed. This means that there is a lack of silt, which makes this method even better. The Principle “Fish are incredibly tuned in to the noise of food hitting the water. There is such competition for food in these lakes that they have to react to the noise before their mates do! This is why the pinging approach works so well. The regular sound of the pellets hitting the water will attract fish from far and wide.

“The way fish feed on hard pellets is another strength of this method. Fish have to pick off hard pellets from the lake bed. They have to dip down and pick up each and every pellet, which means that bites are always very confident on this method.

“I liken this kind of fishing to roach fishing. Much of the action is through the water and pinging for carp is no different. Yes, a large percentage of your bites will be on the deck, but inevitably there will be fish to be caught on the drop.” Pellet Choice “There are three sizes of pellets to consider for pinging, and these are 4mm, 6mm and 8mm. For smaller carp, and throughout winter, I always opt for a 4mm. These are slightly less selective and just create a bit of competition in the swim from fish other than carp.

“Throughout the warmer months, I always use 6mm or 8mm versions. The 6mm is probably the most versatile size but an 8mm is deadly where big carp are concerned. Both of these pellet sizes create a lovely noise to help draw the fish.

“With 6mm and 8mm pellets they can be fed straight out of the bag, as they have the density and weight to sink to the bottom without getting caught in the surface tension. The 4mms, though, can and often do get caught in it. For this reason I give the pellets a ‘skin’, which just helps them break the surface tension and sink quickly to the bottom.

“To skin the pellets I give them a very brief (I’m talking five seconds) dunk in water and drain them off straightaway. I then add some Old Ghost Mussel Concentrate liquid; this not only gives them a hint of flavour, but also makes the pellets sink that little bit faster.” Feeding “This is all about feeding small amounts regularly. Again the feed quantities need to be aligned with the size of the pellet in use. When using 4mm pellets, for instance, you can generally feed a few more pellets – say 10 to 15 at a time.

“With 6mms, an effective route to go down is to feed four to six pellets at a time and with 8mms just two or three.

“The frequency with which you feed is what needs to be worked out as you fish. For example, today there is a clear pattern to catch effectively. I have worked out that I can feed about 10 4mms before shipping out, then ship out, lay my rig in and wait for a bite. As soon as I strike into a fish, I then feed a similar quantity.

“This seems to be a nice feeding frequency that keeps the fish nicely on the bottom. When the weather is warmer I may up the frequency, but be careful. Unless you are sure that you will catch shallow, don’t commit to a feeding regime to do so. Always feed to catch on the bottom and if they choose to come up, then the fish will tell you.” Hook Baits “I will always set two rigs up for the same line. One with a normal hook and the other with a banded hair rig. I will always start on an expander pellet, as it is a safe option to get a few bites. I bring both 4mm and 6mm expanders with me and usually start on a 6mm.

“To be honest, though, I want to catch on a hard banded pellet where possible. It is just a more efficient fish catcher. But when the weather is cold it may not work, so it is worth setting both up. “One little trick that I use a lot is to try a white 6mm pellet in the band. This has worked countless times for me down the years and today it has been the best hook bait by far.

“I am not entirely sure why but I like to think it is a visibility thing and it probably just catches the eye of a carp quicker than a normal brown pellet.” Rig Choice “As I mentioned previously, I aim to catch fish both on the bottom and on the drop and my rigs reflect this; yes they are positive but they feature a strung bulk at half depth and just one dropper below this. This gives the hook bait a nice slow fall, which could pick up the odd fish on the drop. But more importantly, the way in which we are feeding means the fish become used to seeing pellets dropping through the water regularly. This makes it a must to try to replicate that with your hook bait, and this kind of shotting helps that.

“I set up two rigs: the first is my deck rig, which is designed to be ultra-stable in any tow and features a 0.4g MW Diamond. The shotting is as I have mentioned above. This rig features a 0.16mm hooklength and size 16 Gama Pellet hook with a hair-rigged bait band.

“My second rig features a 4x14 DPF17, which is a much slimmer float that offers a touch more sensitivity. This kind of float is better when using expander pellets as bites are rarely as positive as they are with the hard pellets.

“Its also important to mention that you need to be fishing dead depth. This especially rings true with hard pellets as fishing overdepth will only lead to foul-hooked fish.” 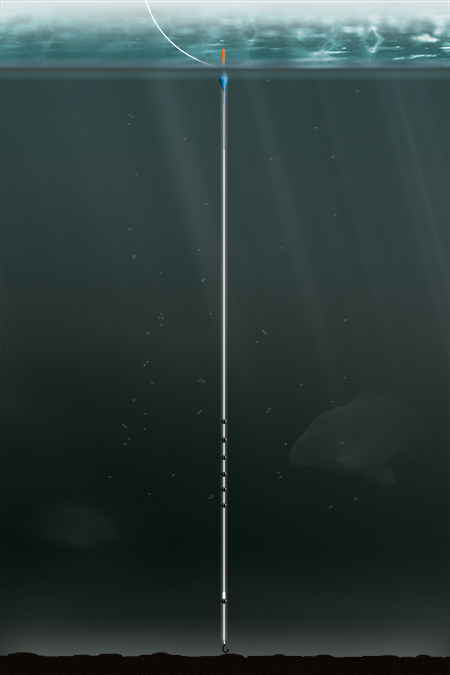 Keep Pinging “I have started off my session today by simply firing 10 pellets into the swim. I never want to get to a situation where there are lots of uneaten pellets on the lake bed, so with this in mind I don’t dump a load of bait in at the start, even though I am expecting to catch a lot of fish. Instead I will build it up by feeding the 10 pellets regularly and see how things progress.

“Alders is an exceptional winter venue and to be fair is unlike many other places; nevertheless, the response takes a while but after about 40 minutes of feeding and catching the odd fish, the real action begins. I begin to catch a carp every cast and I have found the best feeding routine to be to ping a few pellets before I ship out and then feed again as soon as a fish is hooked. “On other days, however, I will need to feed when the float is in the water and really create some competition in the swim. Be careful with this, though, as becoming too erratic with the feed may lead to foul-hooked fish.

“Today has been an exceptional demonstration in the art of pinging. The feeding has been bang on and I have caught on the bottom all day with minimal foul-hooked fish and missed bites. This is down to gauging the reaction of the fish and then tailoring my feeding to suit.”