This entry was posted on 5th April, 2018 by Jacob Robinson 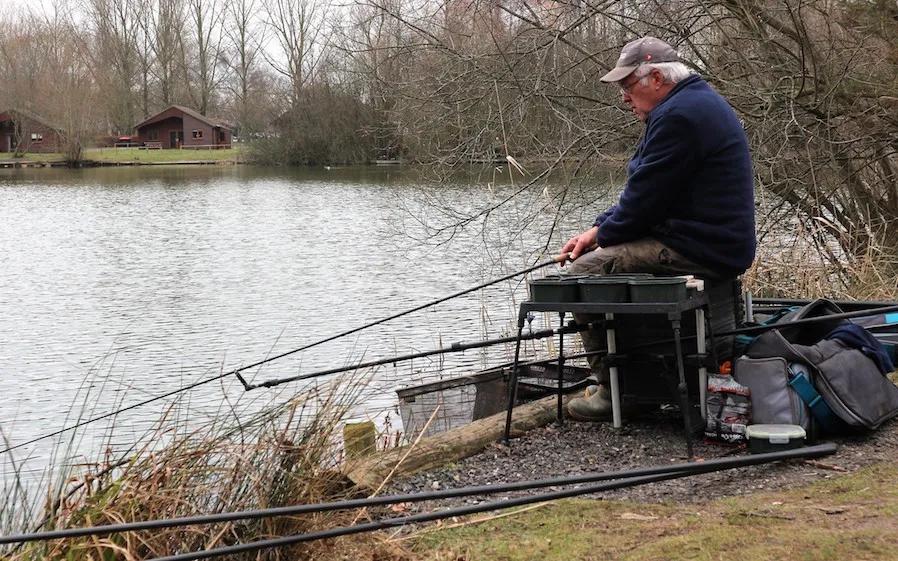 The back end of the river season was a washout with ice, snow and high-water levels. So, a few days after the thaw set in, I retreated to the deep Specimen Lake at Woodlands. I had unfinished business there after losing a massive roach back in February. There were not many people about, so I managed to get the same swim I fished before, although I wasn’t that confident because the water had an icy looking tinge to it. My main line of attack was going to be the feeder again, a free running cage design with a dark groundbait containing a smattering of casters and a few grains of hemp. When bites are hard to come by red maggots usually score best on the hook, so I kicked off with a double offering of red grubs on a size 18, tied to a 0.11mm fluorocarbon trace.

To begin with it wasn’t as slow as I had expected. The bailiff turned up and as I was just about to have a chat with my first cup of coffee in hand, my quivertip sailed round and a 14oz roach was soon in my landing net. Next cast, again before I could get a sip of my drink, another bite materialised, only that fish came off on the way in.

It went quiet after that and I think I was on the third cup of coffee from my flask before my quivertip showed up any more indications. I missed a few and then caught a string of small perch and roach. Another quiet spell followed, so I dropped down to a single red maggot and this resulted in something pulling my quivertip round into a proper bend. At last a good fish was on and judging by its rod thumping nature it felt like one of the big roach I was targeting. I played the fish in ultra-carefully with the memory of the giant red fin I lost last month still raw in my mind. The fish broke surface and it looked like a massive specimen! However, once in my landing net, a closer look revealed this was a hybrid, around 75% roach and 25% bream. Still a lovely fish to catch, but my feelings were tinged with disappointment, especially as only small stuff turned up after that. 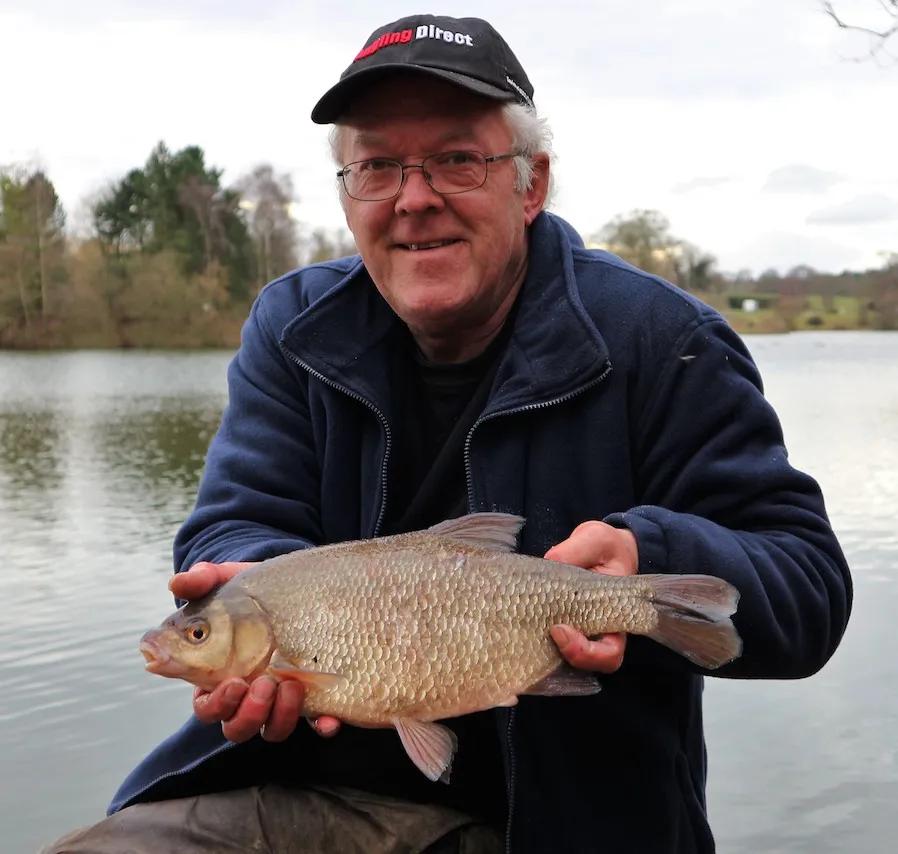 A few days later the weather was still on the cold side, so I decided to give the Match Lake at Woodlands a first visit. The bailiff had told me where the deep-water swims are to be found and reckoned these might provide some action. I tucked myself away in a corner to get out of the chilly wind and set up a feeder, along with a couple of pole rigs. I fed the pole line with three cup-fulls of groundbait laced with casters and chopped worm, starting on the feeder with a similar mix.

It was dead on the feeder line so after 90 minutes I had a go with the pole. A couple of strange “ghost” bites materialised on red maggots, but I didn’t hook anything. I tried a small segment of worm on the hook and caught a tiny perch straight away, then nothing.

Back on the feeder, my quivertip started signalling a few indications and after topping up the swim with a couple of casts I caught a small skimmer and then a hybrid. Next came a better 1.5lb skimmer, followed by violent take and my rod taking on a decent bend. The way this fish was bumping and diving around I suspected it was a perch and it turned out to be a decent one, potbellied, ready for spawning. Typically for this tricky time of the year, that was the end of the action. 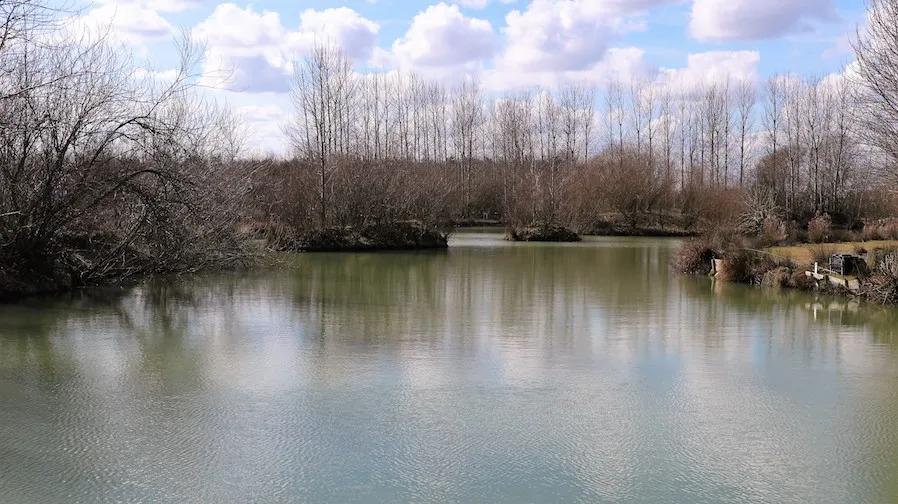 Next trip, I fancied having a go to see if I could catch elusive stillwater chub from Priory Lakes. I’ve already caught one on the first lake, so I opted to try the bigger Match Lake, which is dotted with

fishy looking islands. I set up an insert waggler rig, aiming to fish just down the shelf at the end of an island that has lots of overhanging tree cover, the type of swim I would choose on a river or canal (I couldn’t see why lake chub would inhabit anywhere different).

I should explain at this point that my insert wagglers have all been modified. I still prefer peacock designs, but I have replaced most of the inserts with hollow plastic tips. The latter are translucent and much brighter than standard painted tips, showing up so much better when fishing into shaded areas. 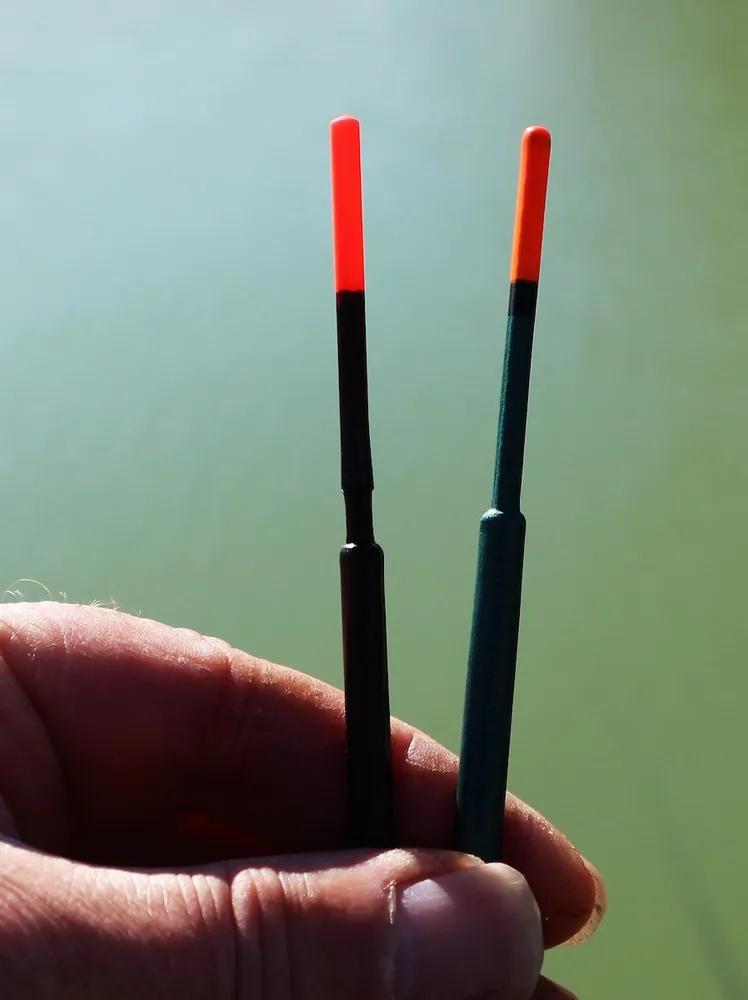 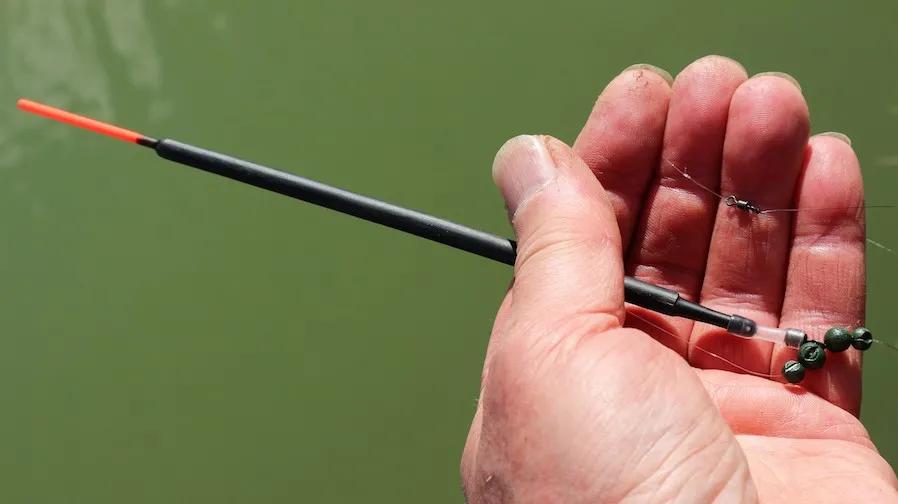 Something else I always do when waggler fishing is connect the main line to the hook length via a micro swivel. Apart from acting like a small dropper shot, the swivel stops fine diameter trace lines from spinning up. I use a long hook length and place a proper number 9 dropper shot between the swivel and my hook. If I need any more shot down the rig it goes directly above the swivel, while the rest of the loading the float takes is positioned around a float adaptor, at its base. In this case two AAA shot and two BBs outside of them. 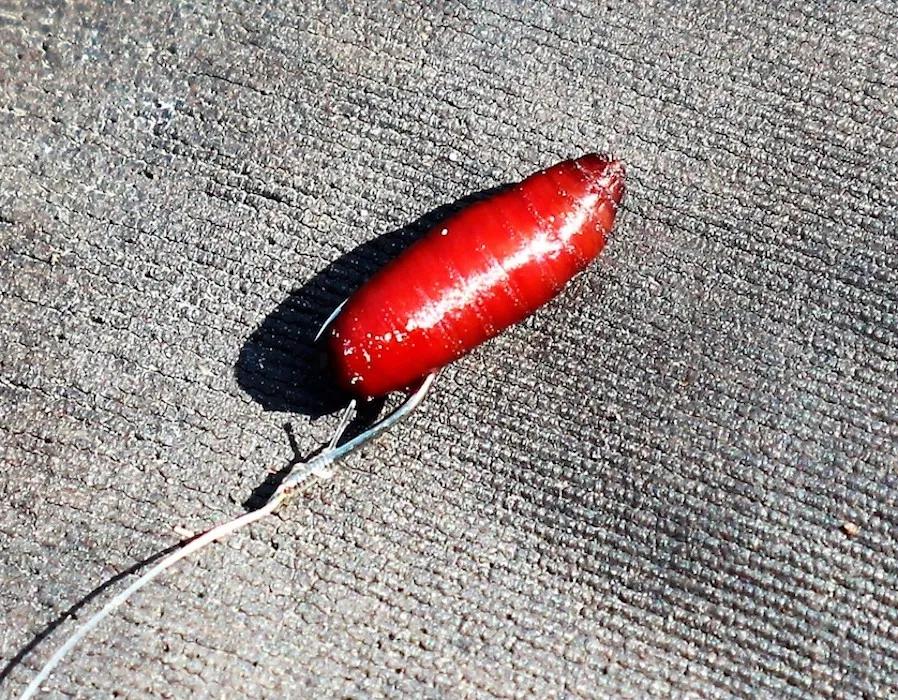 I decided to loose feed little and often style with a catapult, mainly casters and a few 4mm pellets. It was a slow start, just a few small roach to begin with on a single caster, mounted on a size 18 hook, tied to 0.12mm line. Not many other anglers were about and nothing much was happening, but I stuck at it and suddenly a more positive bite was converted into a serious bend in my 13 ft float rod. There are a lot of sizeable carp in this lake, but this didn’t feel like one. The fish zigzagged in a more mobile manner and then tried to dart into some bankside reeds. It felt like a chub and when I gave it some serious stick to get it to the surface, indeed it was a decent sized one. Nice when a plan comes together! 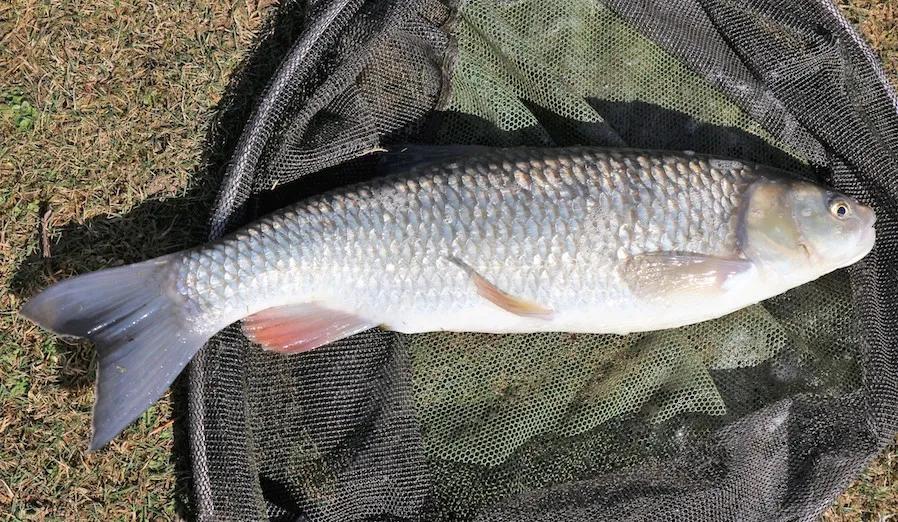 I caught the chub down the shelf but as some of my loose feed was spraying past this point, I tried shallowing up and casting tighter to the island. I’ve enjoyed many waggler fishing sessions for chub where you must get your tackle right against any far side cover to get bites. But on this occasion it was only small fish showing in this area. I set my float deeper again and dropped back down the shelf. A much slower, dithering bite came next. I waited until the float tip gradually slid under and my rod took on another decent bend. This time the fight was more ponderous and I wasn’t surprised when a good bream surfaced. 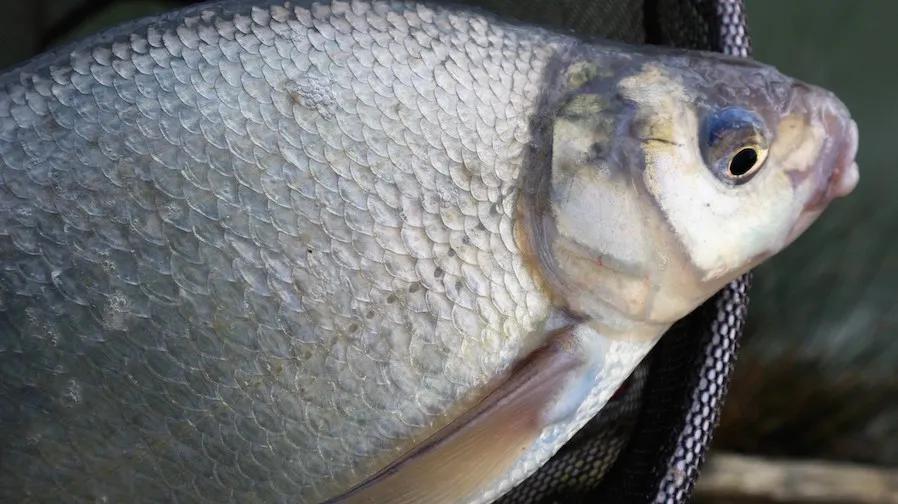 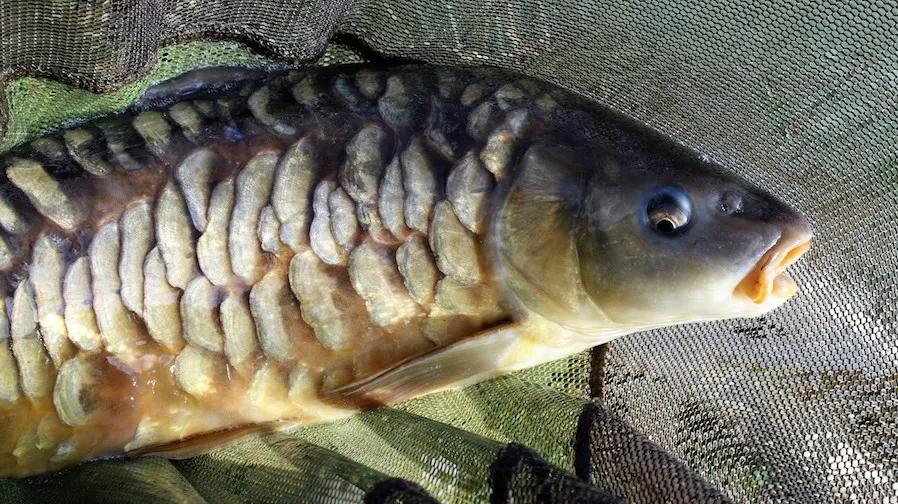 A few smaller skimmers followed and then another proper bream. Up until this point I had gone easy on the loose feed because heavy amounts tend to bring the carp in on this venue. I decided to risk it anyway and step up the feed to try and get another chub interested. But sure enough, the bigger carp moved in and I spent the last hour of the session having some great fun taming fish up to around 8lbs on my relatively light gear. A nice looking fully scaled fish finished things off nicely. 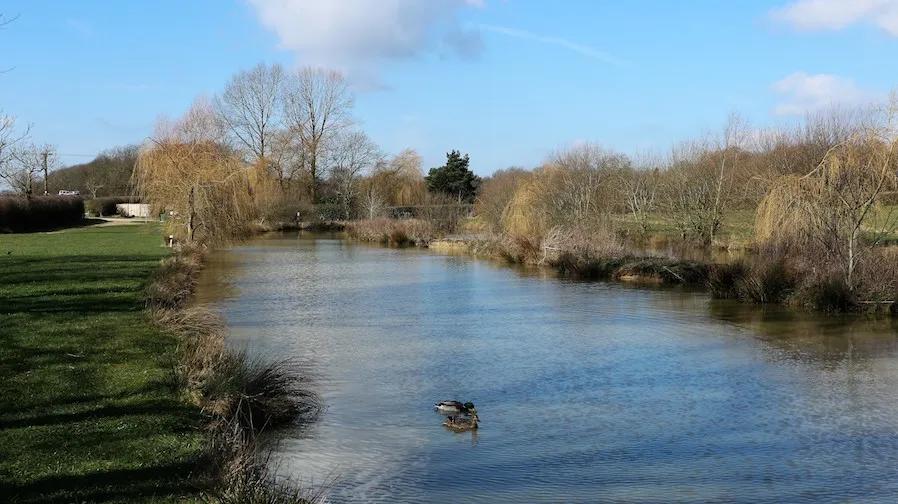 I hope to fish a few local club matches this year and thought it would be a good idea to try out one of the up and coming venues, Stretton Lakes near Oakham. The match lake here is an elongated rectangle with small islands dotted down the middle. There had been a match the day before but on this occasion I had the place to myself, not bad for a six-quid day ticket!

I picked a swim down towards the far end and only set up a couple of pole rigs. One to fish tight to an island and the other for down the track in the deeper water. I fancied the latter would end up being my main feed line because that’s where any silver fish should be, which I like targeting these on carp dominated venues, where very often some interesting surprises can turn up.

There was quite a lot of carp activity around the islands but the wind got up, making it tricky to hold 13 metres of pole steady. I got a few fast bites on pellets, but I think the fish were spooky after probably being hammered the day before. I decided to concentrate on my closer feed line, where I had cupped in a couple of balls of groundbait containing chopped worm and casters. 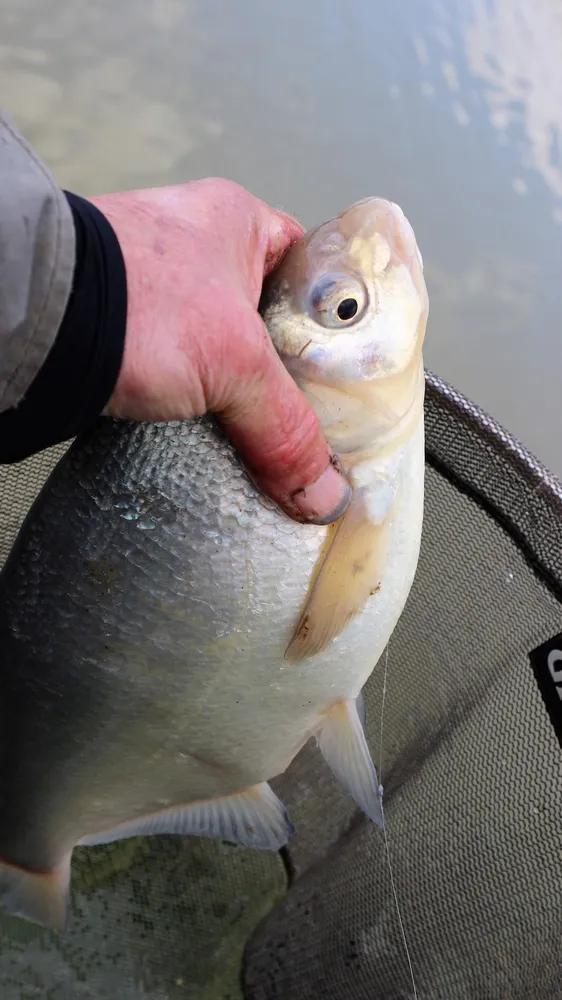 Using a 0.10mm hook length under a light pole float and a size 18 barbless hook in 4ft of water, I tried red maggot first and got a run of tiny roach. I cupped more gear in and hand sized skimmers turned up next. The best trick seemed to be feeding a small ball of groundbait, catching 3 to 4 fish off it, and then to feed again. Gradually the size of the skimmers improved, with some nearing the pound mark. This prompted me to try a segment or worm on the hook and a proper elastic stretcher resulted. Too ponderous for a carp and it turned out to be a decent bream. Then I made a fatal mistake. I upped the feed rate, cupping in larger balls of groundbait, along with some pellets. The carp moved in big time and the silvers scattered. For the rest of the session it was carp around the two-pound mark, which I fed back, only putting occasional silvers in my keepnet. It turned into a really nice session all the same. Plenty of action, which was a refreshing change after such a long and hard winter campaign. 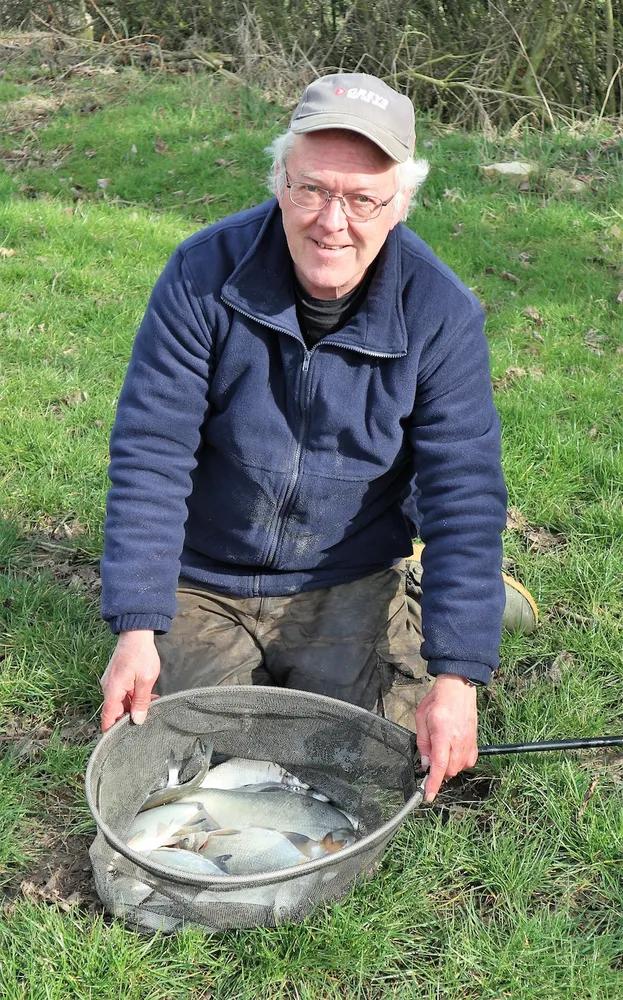