How To Fish With Live Peeler Crab...

This entry was posted on 19th June, 2014 by Jacob Robinson 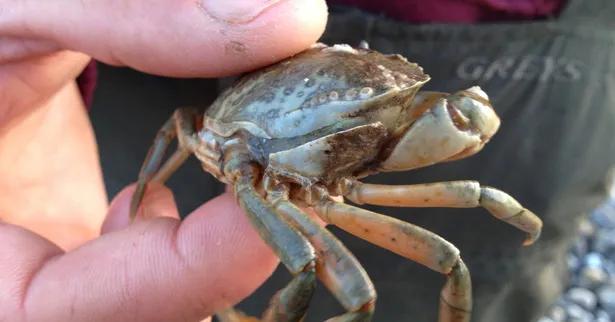 From around early spring to mid summer the Peeler Crab becomes a must have bait in nearly all my sea fishing. The annual crab moult usually happens early spring with the males moulting first, followed a few weeks later by the females. The male crabs tend to be more popular amongst anglers as these are often the bigger, juicer crabs and perhaps offer the angler more bait for there money. It’s also believed that the male crabs will not be mobbed by other male crabs attracted to it, unlike the females with there sexually attracting pheromones.

It’s easy to differentiate between the males and females, if you turn the crab over on its back you’ll notice the tail plate, on males it will be quite a pointed ‘V shape’ where as on the females it will have a very ‘rounded’ edge.

It’s important to remember that peelers are certainly not a magical license to catch fish, but they do enhance your chances when used on the right venue at the right time of the year. As you can imagine a soft moulting crab is a very tasty, easy meal, for the fish that feast on them.

I like to try and keep a decent supplier of fresh peeler in the fridge from around the end of April to the end of July, unfortunately due to location and free time, I’m unable to collect my own, so it’s often a case of buying them from a local bait supplier, or trying to source them online. Now, they can be quite expensive, with anglers paying between 60p and a pound for a single crab, so if you’ve spent your hard earned cash of them, you obviously want to look after them.

Personally, I like to keep them in shallow trays stacked in the fridge, with around half an inch of fresh sea water in each tray, the tray is then covered with a damp sheet of newspaper or cloth. I will check the crabs twice a day, once in the morning and them once again in the evening, changing the sea water on one of these occasions. It’s essential to do this, one to check for fatalities and two to check for any crabs that may have ‘popped’ there shell, the former will need removing and disposing of, whilst the latter will need to be peeled and frozen down.

I am sure others may have more intricate ways of looking after them, but with limited space this works for me.

There is probably whole blogs which can be written on how to collect and care for your peelers, but the idea of this blog is to show how to use them when your on the beach.

We get a lot of anglers both in store and online asking about the correct way to peel them and hook them and it can seem quite a daunting task, but really it’s quite straight forward.

Here are a few simple steps to explain how I like to rig mine, once again this is just personal preference and a way that, through experience, seems to work. 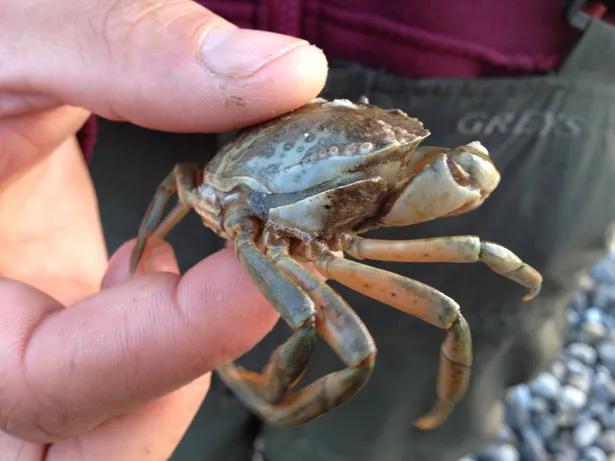 1.) First of all you need to make sure the crab is ready to peel, in some cases its obvious, but in other cases its not. A simple way to check is too look at the side of the crab, as you'll see in the image above the side plate has cracked away from the main shell, meaning the crab is getting ready to moult. 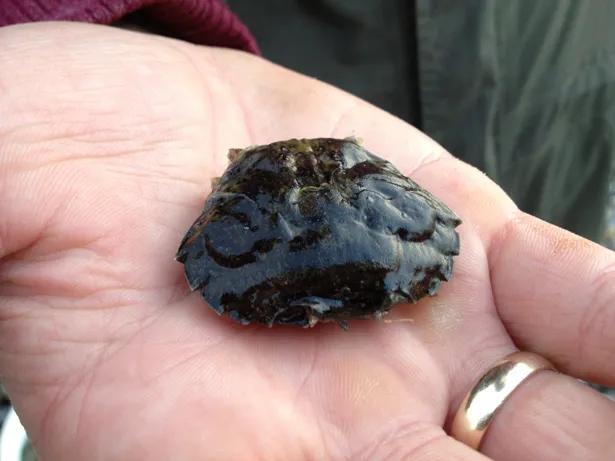 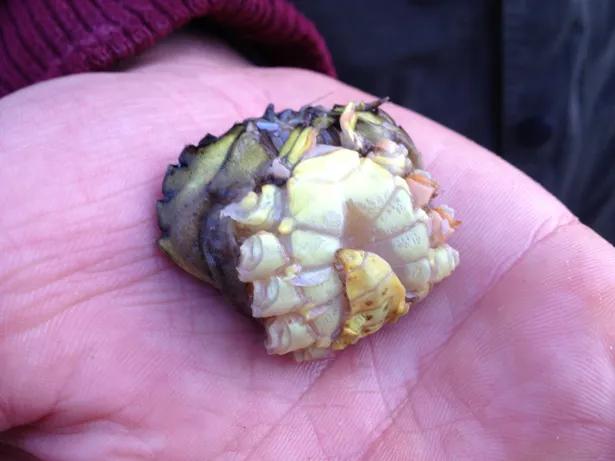 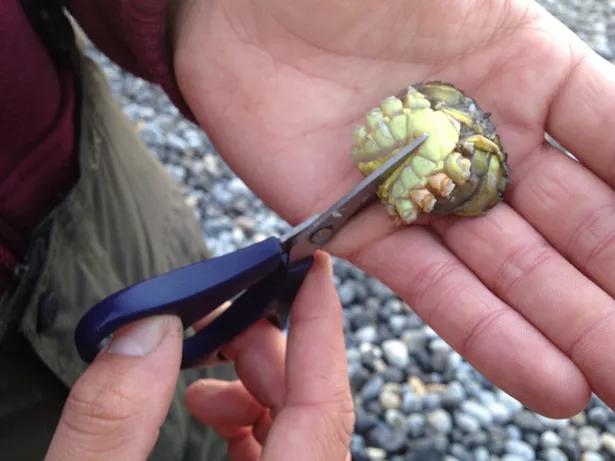 3.) Now some anglers will simply hook this straight on the hook, which is fine, but I like to rig mine a slightly different way. On small medium sized crabs, I will often use these whole and I start by making a small cut, about half way into the bait. (On large crabs I would cut them in half to make two baits). 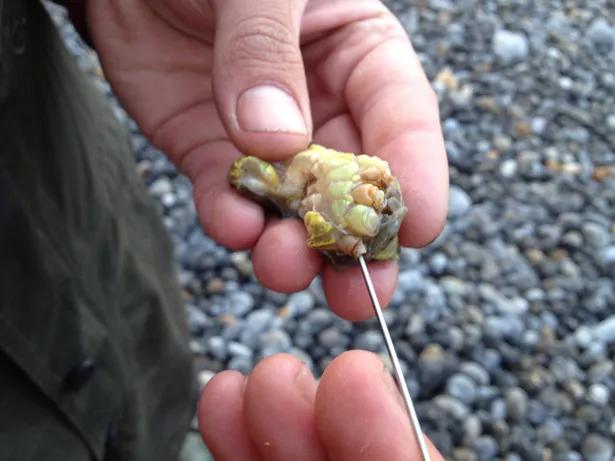 4.) Once I've made the cut I will then carefully ease both edges apart, which forms a sausage shape, I then thread this onto a baiting needle, the same way you would do with a worm. You can enter the baiting needle through one of the leg sockets for extra security. 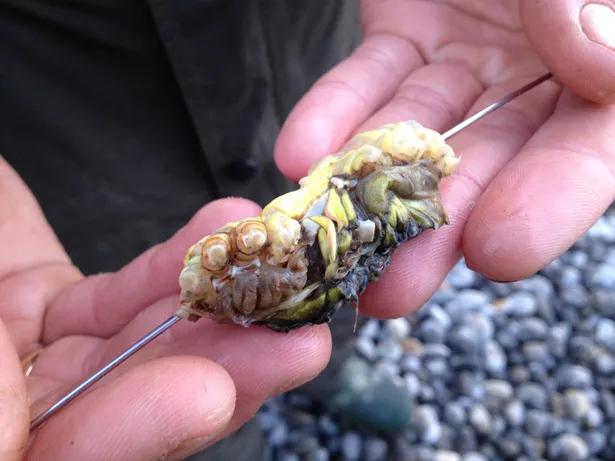 5.) Once threaded onto the needle you whole crab should look something like this. As I said, with large baits you would now have two separate pieces of crab on the needle. 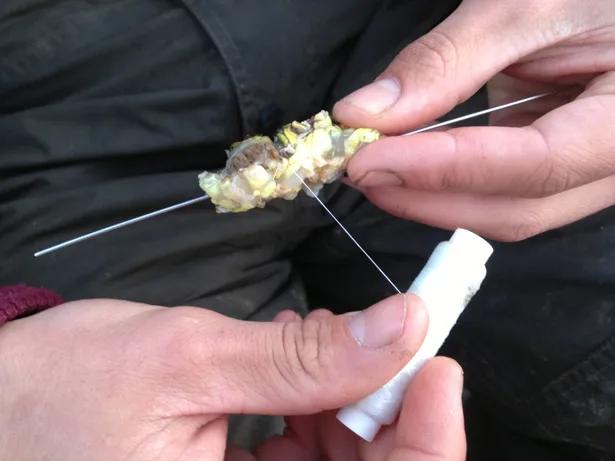 6.) Now its just a case of adding a good dose of bait elastic, I don't like to cocoon the bait too much, but just whip round it a good few times. Make sure you whip the elasticated cotton round under tension, as then it will really 'grip' the soft bait. 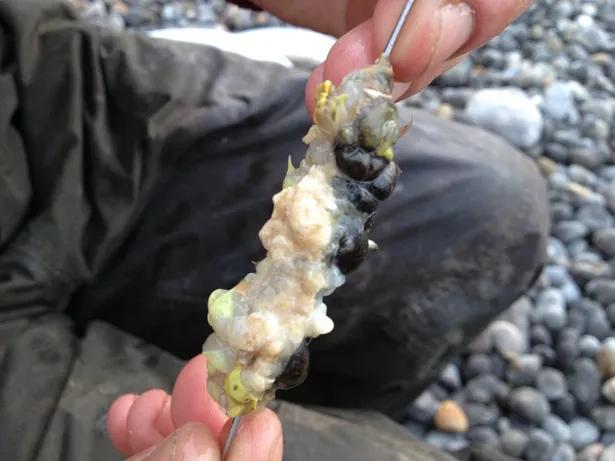 7.) Once you've used you bait elastic you should end up with something like this! You can now see the difference the elastic has made from the bait in picture 5. Now its just a case of adding the bait to the hooks! You know have a fairly robust sausage shape, which can be hooked in many different ways, but I now thread this on the hook like a would do a worm bait. 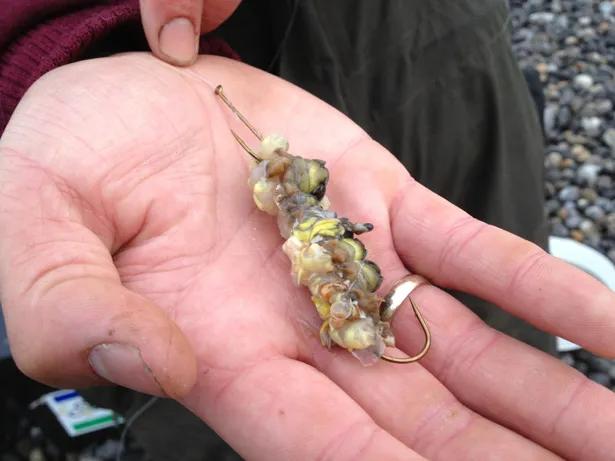 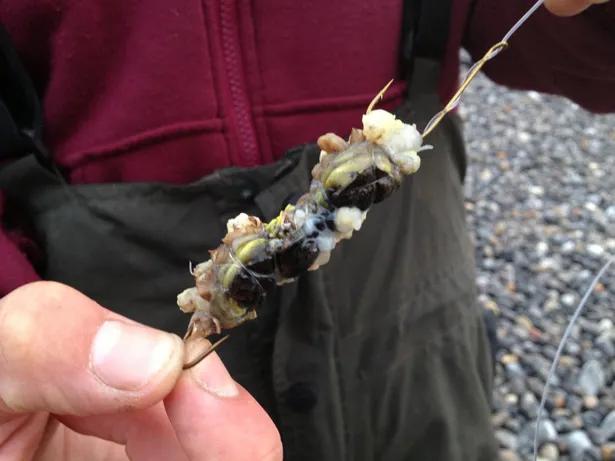 8.) Here's the finished article! I like to rig my peelers on Pennel rigs, especially on large crabs, as I feel it gives me much more hooking potential. One thing you will notice as well, is how much hook point I have showing, this is crucial, as every sea angler knows there's nothing worse than missing that 'bite' of a lifetime! The rod hoops over, the line goes slack and you wind down and strike into fresh air!

9.) Another little tip is to fish with 'clipped down' rigs, use something like an impact shield or impact lead as this will give your bait added protection on imapct with the water. With 80p of prime peeler on the hooks you don't want your bait exploding on the cast! Fishing clipped down will also streamline your rig and help you gain those extra few yards! 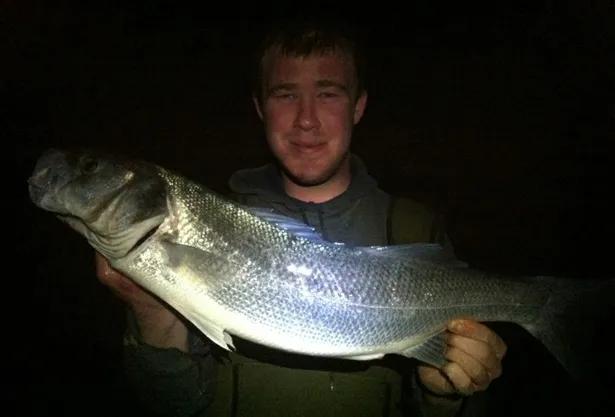 10.) Hopefully if everything goes to plan, at the right venue, on the right tide, your Peeler crab will work its magic, like it did with this cracking Bass, which weighed a few ounces over 6lb.