This entry was posted on 27th May, 2015 by Jacob Robinson 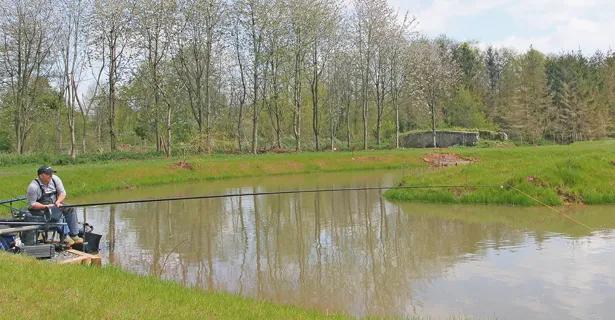 Les Thompson rises to the challenge of catching a tench from an idyllic lake containing just 100 fish!

If there’s one fish to be branded as temperamental, it has to be the tench. They give away telltale signs of their presence by tiny bubbles or tremors on a lily pad, but can remain impossible to catch for even the greatest of anglers! This unique species has a vivid green coloration and their tiny scales are covered with a layer of mythically ‘healing’ mucus. The tench’s craftiness makes for an exciting chase and, once hooked, you're always in for a battle!

Docklow Pools, nestled deep in the Herefordshire countryside, has recently opened a new lake stocked solely with tench. Designed to create a challenge for the enthusiastic angler, this 11/2-acre water contains 100 quality fish, ranging between 2lb and 6lb. Having fished here since I was 14, I’ve risen to the challenge of catching one on a pole, which might turn out to be trickier than you first think!

Location With a limited number of big fish in this lake, choosing the right swim is going to be vital. It’s a warm day, with a slight breeze. I believe that ripple on the water creates extra cover for tench and increases their willingness to feed. I’m therefore opting to fish a swim at the windward end of the lake, with an island in front of me at a comfortable pole reach. Open water either side gives me two areas to draw fish from and also means that if I hook a fish one side, playing it won’t disturb any feeding fish on the other. The water is fairly clear and I’m doubtful that the tench will be static in one area. Any tincas swimming around the island are sure to cross my path, so by setting a few traps I’ll hopefully be able to stop one. 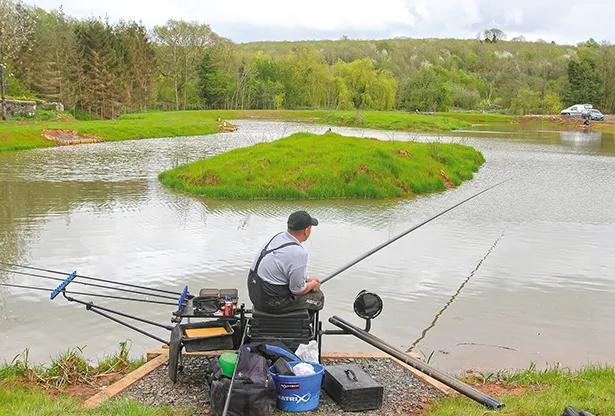 Target The Shelves It is very shallow and clear close in so I’m feeding just two 11m swims to begin with, both at the bottom of the island slope. Food will naturally gather here and it also creates a contour for fish to follow around the island. I’ve caught big tench in clear rivers such as the Avon and Nene and you'll often see them swimming by in the clear water. They’re nearly always at the bottom of a slope on their patrol route and get caught there regularly. I have five feet at the bottom of the shelf and feel that these two areas give me the best chance of snaring a tinca!

Bait Choice I’m covering my options by feeding my swims differently. To the left, a mix of chopped worms, casters and maggots are going in, while on the right I’m feeding sweetcorn and hempseed. The worm swim offers natural amino acids and meats, while the corn and hemp offers sweet smells, with plenty of particles for the tench to graze over. 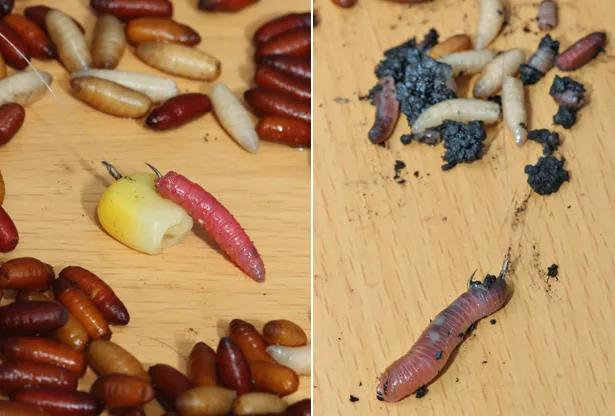 Tench Tackle Well-balanced gear is the key to catching wary tench. It must be light enough to fool them, but heavy enough to get them out. Starting with elastic, I’m using orange Matrix Hollow, equivalent to a No10. Main line is 0.14mm to a 0.12mm hooklength and size 18 Matrix Carp Bagger hook. My float is a 0.3g Matrix PLT Diamond, shotted with a spread bulk of No10 Stotz starting eight inches from the hook.

Tench are primarily bottom feeders, so I’ve opted to start four inches overdepth. If the wind gets up I’ll increase this to keep the bait static.

Feeding The traditional way to catch tench is to feed a big bed of bait and wait for them to move over it. However, I’m going to try and tease an early fish by introducing smaller amounts via a pole pot. I’ve made up a mixture of chopped worms, casters and dead maggots, and cup half a pot of this to the left. The same amount of hemp and sweetcorn goes in on the right-hand swim, shaken from a height to spread it and create a little noise to draw in any inquisitive specimens. I bait up with a juicy worm-head hook bait and the anticipation sets in! 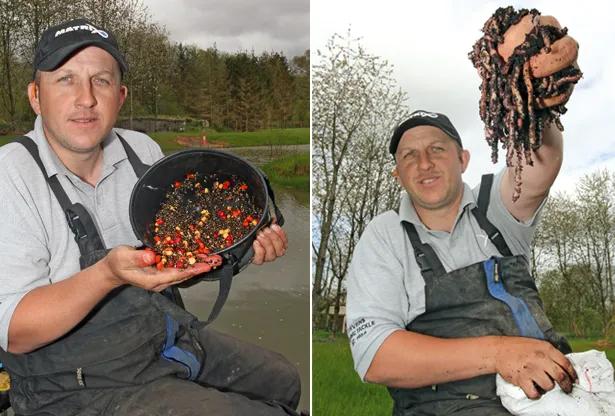 The Challenge Despite alternating between the two lines with various hook baits, I’m yet to have an indication an hour into the session. To try and instigate a bite, I’ve clipped on a Toss Pot and begun introducing small amounts of bait. I’m giving myself 10 minutes on each swim before rotating.

It finally does the trick because my float strangely lifts an inch and wobbles slightly on the worm swim. This suddenly sparks my concentration, before the bristle whacks under and I hook something angrily jagging out several feet of elastic! I try and keep the pole above the fish and gently nurse it back to the top three. The boiling tail pattern is typical of a big tench, which surfaces with a paintbrush-like tail slapping on the water. I quickly scoop it into the net with a celebratory cheer! At over 3lb the fish is in pristine condition and is certainly one of the most satisfying specimens I’ve ever caught! 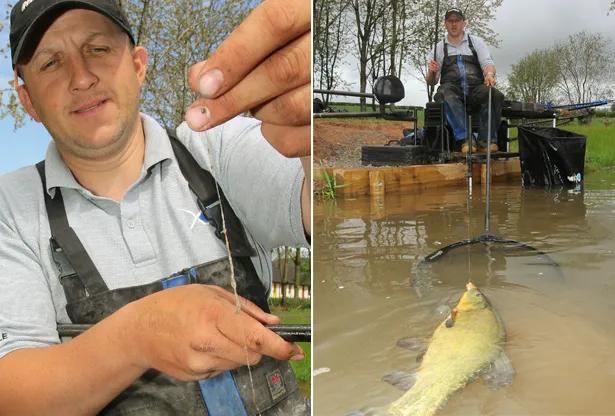 Continuing with the timed feeding and swim rotation, I’m now confident of fooling another. I spot a few tiny bubbles over the right-hand swim and again get a slight indication on the float. A sharp dip, followed by the body of the float popping out of the water signals an umissable bite, and I’m in again! Another spirited battle ends with a pair of cherry-red eyes staring from my landing net.

With only an hour remaining I’m eager to make the tally three and decide to introduce another big pot of bait on the worm swim to trigger a response. Just as we need to bring the session to a close, another fast bite comes out of the blue on a cocktail of corn tipped with a dead maggot. It’s the biggest fish of the day, just creeping over the 4lb mark! I must admit, after two biteless hours I feared the worst, but in the end I’ve had one of the most challenging and best day’s fishing for a long time. Three handsome fish from a very interesting lake have made my efforts worthwhile. I’m happy to have completed the challenge. Bring on the next one, Pole Fishing!

Shop For All Tench Tackle 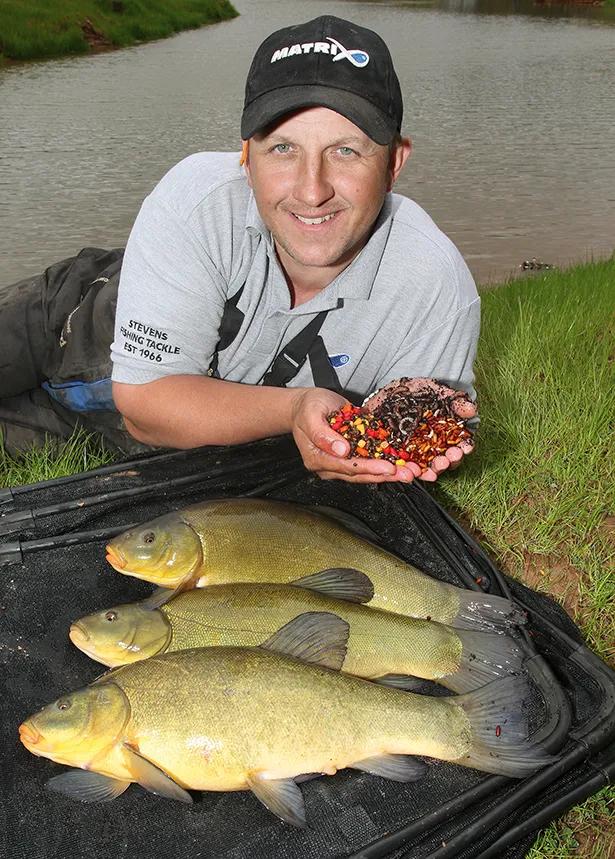