This entry was posted on 16th October, 2020 by Anna Cooper 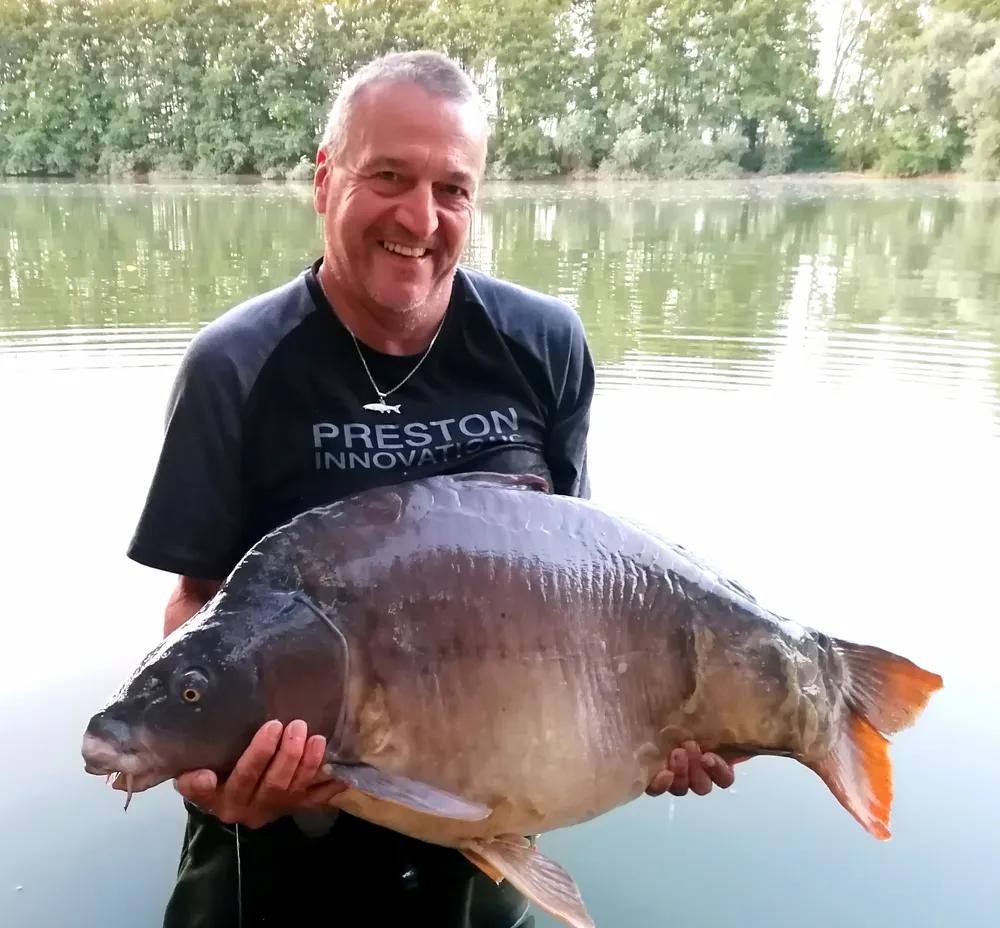 Just a few weeks ago I was writing my last blog and it was over 30 degrees C, a typical end of a summers day, here in France.  We have now suddenly jumped into Autumn with colder nights and wet and windy days, however, I must admit Autumn is a great time to be fishing! All of the species at this time of year are hungry and looking to prepare themselves for the winter ahead. So, whatever the weather is like for you in the UK, get out and make the most of a great time to be fishing!

Fishing in the cold, wet or windy conditions have never bothered, as long as you are well prepared for the weather so that whatever happens in the unpredictable autumn weather, you can still enjoy a comfortable day fishing with plenty of fish. It is always worth the effort!

It is important to wrap up from head to toe, from a warm comfortable hat to a good pair of boots with plenty of layers of clothing in between to keep out the wet and cold. I have found over the years it's much better to use layers of clothing than just a couple of thick jumpers or coats.

When fishing in autumn, I start with a good base layer, often referred to as sleep skins. I then use various layers to keep in the warmth and keep out the wind and rain. A good pair of waterproof boots along with a pair of warm socks is again essential! My personal favourites are the Skeetex range of footwear, that keep you absolutely toasty warm.

Last time I wrote I was preparing for a trip to a carp lake with a group of friends, I was full of anticipation of my first trip to one of the many lakes in France that anglers from all over Europe travel to every year in the hope of catching some big fish and plenty of them, I wasn’t any different and spent ages making sure I was well prepared.

I spent the week at a lake near to Orconte, with Mark, Graham and Simon all of who had fished the lake before and set the scene for a good weeks fishing. With carp up to 70lb possible at this lake and plenty of back up fish to be caught, I was hoping to at least break my carp P.B. of just under 40lb. After walking around the lake and looking at the available swims I choose swim 3 on the main bank, the others agreed that this swim was the best choice in hope for a few fish. 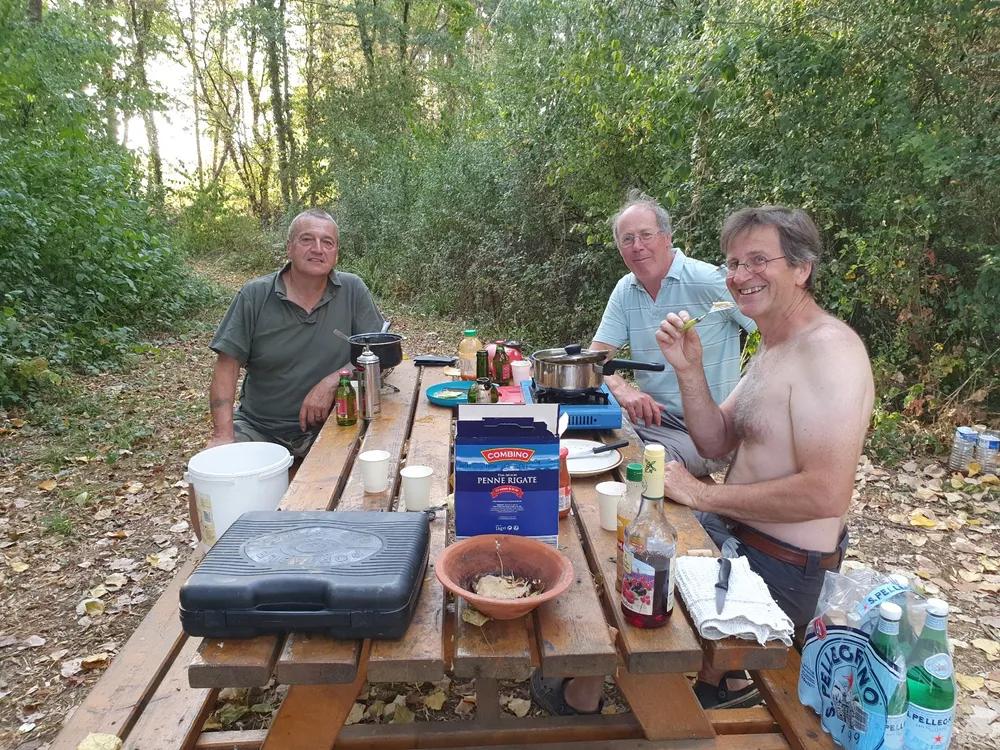 The weather for mid-September was unusually warm with daytime temperatures into the mid-30s and a couple of nights it remained in the 20s not what we had hoped for as we had planned the trip with early Autumn weather in mind! The warm weather certainly worked against us with very little activity from fish during the day. It was not until later in the week when the wind actually got quite strong that the temperature cooled down and the fish actually came out to play.

Night fishing for Carp in Autumn

My first night at the lake produced nothing more than a good nights sleep thanks to my Advanta memory foam bedchair. I normally end up with a bad back after a couple of nights on a fishing bed chair but the memory foam mattress is brilliant, for such a sensible price. In the early hours on the second night, I was awoken by the sound of my Delkims screaming! A mid-twenty pound sturgeon was the result. Not my target fish but nonetheless a welcome catch.

How to prevent blanking when night fishing

To avoid another uneventful night, I decided to feed heavy and use a spomb to feed around 10kgs of a mixed particle, crushed pellet and plenty of my favourite Sonubaits Code Red boilie. The other lads were catching a few fish but these were coming from margin areas and unfortunately, my swim being centre of the lake had very limited margins to fish, so my plan was to try to get the fish into open water with a nice area of free offerings.

Great news! At 3 am the next morning my plan produced the first result a small fish for the lake. It was a common carp of just over 25lb but it certainly made a nice start. With no more activity that night I decided to repeat the heavy baiting with the spomb and build up the swim. 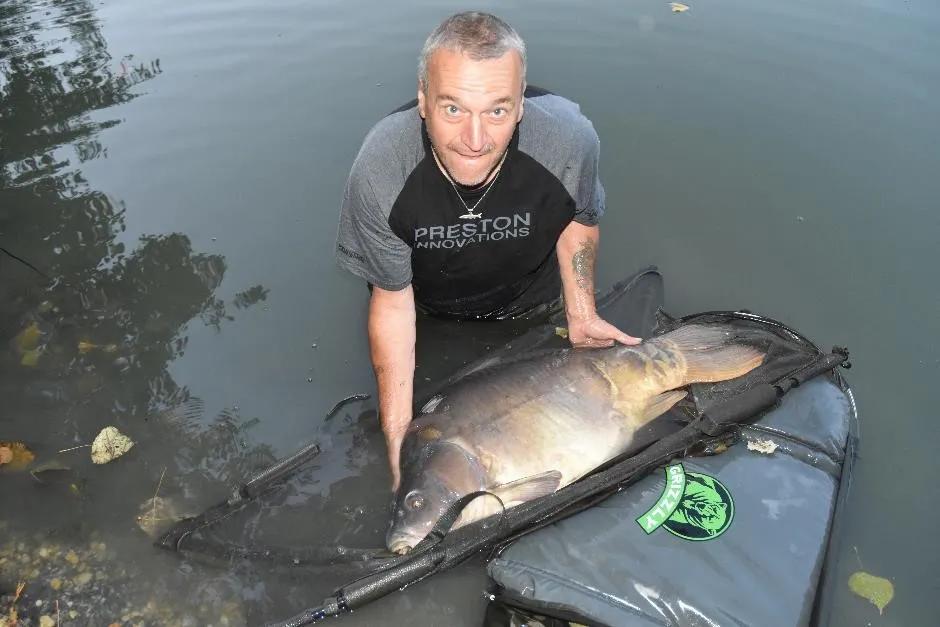 The next night, at almost exactly the same time as the night before off went the same rod and a lively fight with a nice mirror weighing over 35lb. Bringing a feeling of satisfaction, I recasted that rod and before I had a chance to place it properly into the alarm, my middle rod was away and an absolutely crazy scrap followed! I was pretty sure it wasn’t a big fish however I was not sure as it was coasting left to right and back again, as well as staying deep in the water. When it finally came to the net I could see why not a carp but another sturgeon this time over the 30lb mark.

Whilst sorting the sturgeon my attention turned to a familiar noise but it took me a second or two to figure out it was the baitrunner on the rod that I had recast a few minutes earlier after landing the carp. I realised that I had put the rod down in haste, luckily I had engaged the free spool but the line hadn’t gone into the runner on the bite alarm, but a nice mid-twenty mirror being the result. Three fish in a short space of time, with one being a crazy sturgeon had left me with wet feet and trousers. After all of my rods were sorted and after a quick change out of my wet clothes, I got back into my fishing bed. 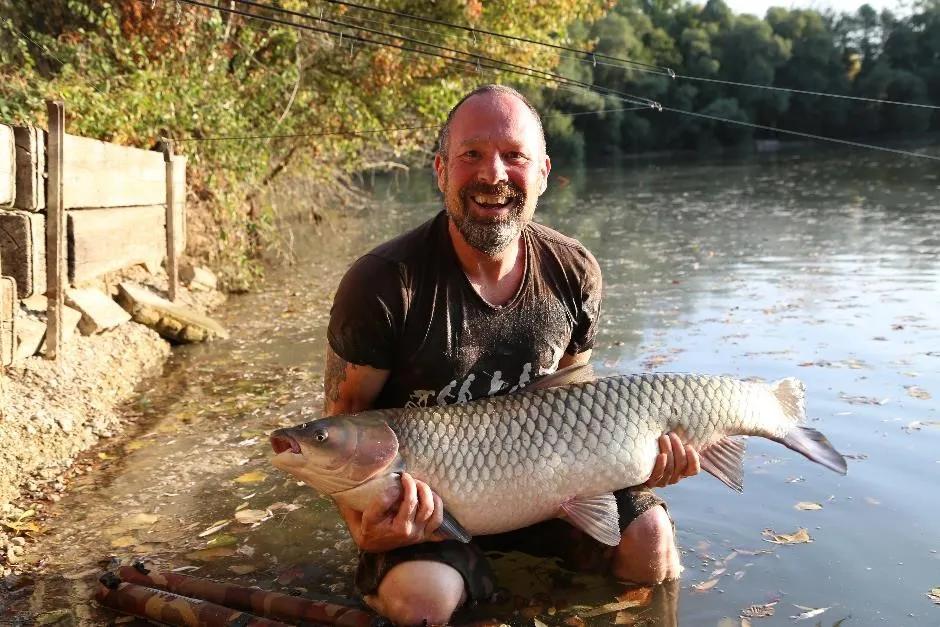 My baiting tactics finally paid off…

I snuggled down and after what seemed like a few seconds but was actually closer to two hours, the Delkims were singing again. This time when picking up the rod I could feel I was attached to a much better fish. After several minutes of solid and determined action, I slid the net under a nice plump mirror that looked well over the magical 40lb weight!

Mark came round to my peg to assist with weighing the fish and then took some images of my new personal best.  A great mirror carp weighing 45lb 8oz! My target for the week had always been to smash a new P.B. so I was proud of what I had achieved. Unfortunately, that was the last carp action for me for the week as the wind had swung round from North to South. I did manage two sturgeon which fought hard but again, not what I had hoped for. 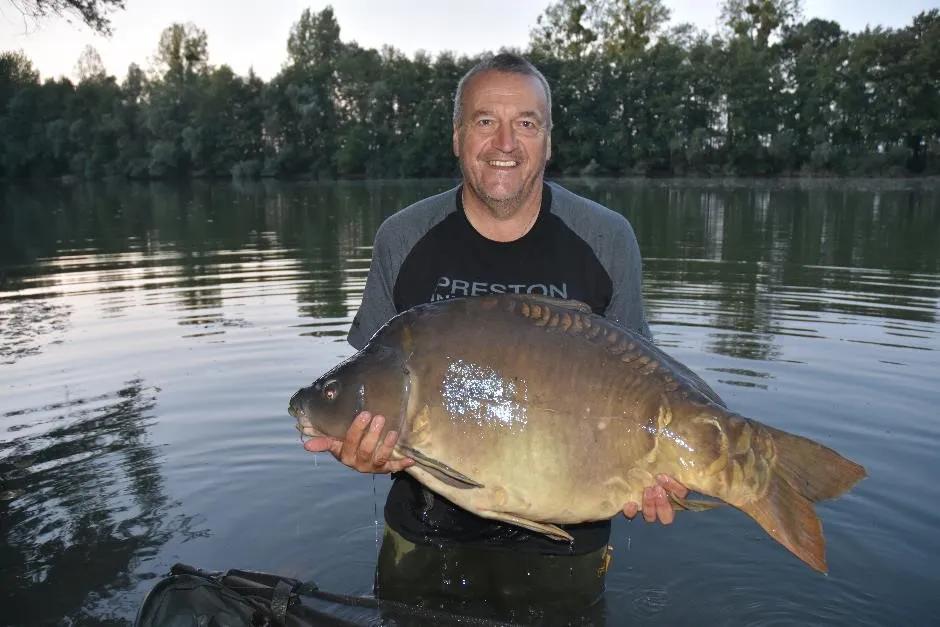 Mark and Simon had faired much better and ended up with over 20 carp between them with several over the 50lb mark. Graham like me had only managed limited success. Nevertheless, we had a great week with plenty of social banter and fishing tales to complete a memorable week. 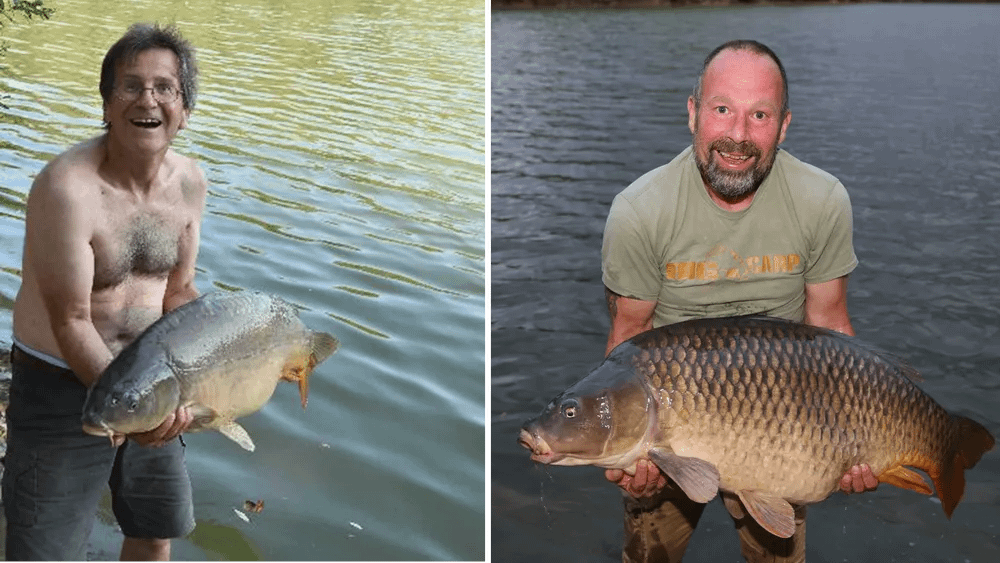 Back home the river desperately needed some rain.  The rivers went almost 10 weeks without any measurable rainfall, so it was great to see the last couple of days the rain has hardly stopped. The rain should put the river into good condition for some autumn fishing. With plenty of friends visiting the river for fishing over the next few weeks,  I will keep you up to date with what we manage to land.